TUESDAY TIDBITS: Hold Onto the Ball 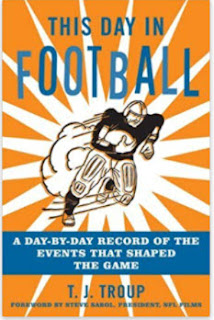 Eric Goska wrote an exceptional column yesterday concerning turnovers in the rivalry between the Packers & Bears...and today will dovetail onto that aspect.

Many, many, MANY times we hear coaches, and/or announcers state emphatically that we must win the turnover battle. While that is very true, how come none of them ever give a win percentage attached to interceptions and fumbles? Lazy? don't know how to do research?

Writing a short story on the 1952 Rams for Allen Barra in his second book in 1987 (Football by the Numbers); told America that if you intercept a pass and return it for a touchdown you win about 80% of the time. Sent the information to Mr. Steve Sabol, and boy oh boy you talk about a stat opening a door?

Being a man who is fascinated with where words come from, and their definition, looked up the word fumble. "to grope for or handle something clumsily or aimlessly, in an awkward or clumsy way....fail to hold onto the ball". Research tells us was probably first used in 1534, and no Frank Gore was not carrying the ball then.

Sunday afternoon Jeremy Chinn scored twice against the Vikings on fumble returns over the course of just a few seconds. He is only the third man to accomplish this feat. The first was Al Nesser, and the second was Fred "Dippy" Evans the second on November 28th, 1948.

This column will not be a history lesson on Chicago Bear history, yet the '48 Bears still rank as one of the best second-place teams of all-time. Late in the season Fred Evans joined the Bears for three games and played right corner.

My book This Day in Football on pages 119 & 120 details Evans exploits that afternoon in Wrigley against Washington(that book is now out of print). Evans in his very first game in the NFL(he played in the AAFC for Cleveland, Buffalo, and Chicago)...ties Nesser's record.

Now, 71 years later the stalwart rookie for the Panthers joins this small fraternity. Sunday night Smith of the Packers rambled 14 years with a Mitch "mistake-prone" Trubisky fumble to score. Smith is not the first Packer to return a fumble for a score on November 29th.

So, who else did score for Green Bay with a fumble on this date you ask? The 1964 Dallas Cowboys gain just 132 yards in total offense against Green Bay, and twice a Packer picked up a Cowboy fumble and score. Henry Jordan dashed 60 yards, and Lionel Aldridge scampered 29 yards.  Final Green Bay 45 Dallas 21.

The remaining weeks of this season we will all see if the trend continues, but no doubt on the practice field you would hear coaches exhorting their players to "hold onto the ball". In closing, over the last three years have vilified Matt Patricia for his lack of leadership and knowledge with the Lions. Sheila Ford Hamp stated "I will do everyone I can to bring you a winner".

Ok, Ms. Sheila...pressure is on, and no doubt she will not be calling me, yet whoever gets the job in Detroit he better have someone who can actually teach defensive backs how to play, and how to play both zone and man coverages. The Lions continue to be among the "sloppy six"....in the defensive passer rating category with a mark of 101.7.