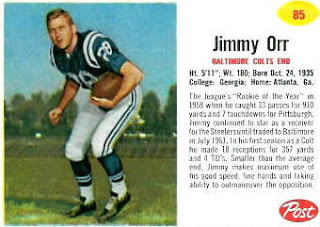 Two weeks left, and so many scenarios concerning playoff berths, and seeding. After the games beginning on Christmas day through next Monday night, just might be able to have a genuine learned opinion on who makes it, and who goes home.

Before going any further want to address comments from two men that have responded many times to what is in my column...Jim Holtgym & Brian Wolf. Jimmy Orr bounced around from one southern college to another, and being taken late in the draft by the Rams tells you that he just might not be talented or motivated enough to stay in the NFL.

Imagine for a moment if the Rams receiving corps was Orr, Shofner, Dale, and Phillips! Wade just might have given Johnny Hightops a run for his money as the most productive passer in the league. Though could make the entire column on Orr, and his long career; he was without a doubt a man who gave corners in the league all they could handle. 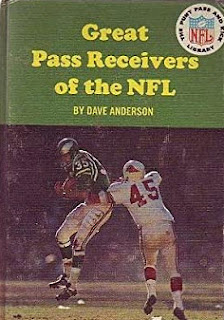 He even got a chapter in the Punt, Pass, and Kick Library in Dave Anderson's book Great Receivers of the NFL. Jim, you are most welcome to come to my home in Louisville and watch film. Brian Wolf you mentioned that Orr and Hugh Taylor are two of the most underrated of all-time. While very different size-wise, they both had the ability to get open deep, adjust to the ball in flight, and make the catch. Baugh stated on more than once that Taylor was by far the best he threw to. Brian you also are cordially invited to Louisville to watch film.

Many teams have begun a season looking like they would be around for the play-offs and fell apart, and then there are the teams that start slow, and come on strong and earn a playoff berth. For today gonna mention two in the later category. 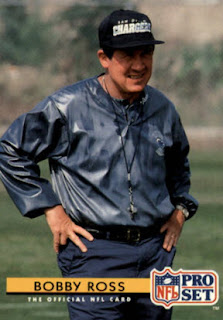 The Chargers had gone 22-42 the four years previous to the arrival of Bobby Ross. Opening day in '92 and am at the "Murph" to watch a very strong Chiefs team take on the Chargers. The 24-10 Kansas City victory does not tell you how hard fought and close the game was. The Chiefs scored on a punt return by Carter, and a coast-to-coast interception return by Kevin Ross.

San Diego lost the next three weeks to teams with a combined seasonal record of 29-19. No doubt Charger fans thought that Bobby Ross was in over his head. San Diego was the most improved team in the league by the end of the year and beat the Chiefs in the wild-card round. Bobby Ross and myself communicated for years...the man could just flat coach his style of football. Of all the teams that have ever been given no chance of earning a playoff berth at mid-season the 1970 Cincinnati Bengals still must rank at the top. One note, the Chargers won yesterday.

Two losing years and a roster that has men who just might not be NFL caliber players...and they are last place with a 1-6 record. The Oilers earned a playoff berth in 1969, the Browns played for the NFL title, and the Steelers are vastly improved. The Bengals proceed to win six straight and have positioned themselves to win the division if they can beat the pathetic Boston Patriots. 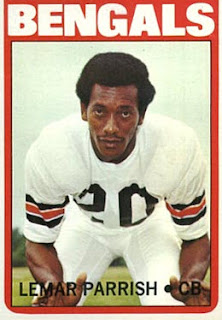 The Bengals have only two men chosen for the Pro Bowl; Bob Trumpy who had his moments when not injured in '70, yet not near the season he had in 1969, and "Leapin' Lamar Parrish" a rookie left corner who made big play after big play all season. This team was the true definition of maximizing what talent they had. Paul Brown still knew how to coach, and on his staff was some guy named Walsh? Joe Kapp is about to play his last game in the NFL and his first pass is pilfered by Ken Riley.

The Bengals drive 55 yards as Paul Robinson scores. Bengals 7 Patriots 0. Boston punts and accurate yet limited Virgil Carter throws a strike to lanky Chip Myers for 56 yards and a touchdown. During the '69 campaign, Cincinnati had multiple 100-yard receiving games.....NONE in '70.

Again, Boston punts. Sam Wyche has come in to play quarterback for the Bengals and leads his team 65 yards to the promised land. Wyche tossed a screen pass to Robinson who dashed 23 yards to pay dirt. Cincinnati 21 Boston 0. The Patriots punt yet again, and Wyched mixing his plays well takes his team sixty yards to score. Sam did the honors himself of a short sweep. Bengals 28 Patriots 0.

We are half-way through the second quarter and the Bengals sure looked poised to win the division, but wait...there keep scoring? Kapp throws another interception to "Rattler" Riley, and Horst Muhlmann splits the uprights Cincinnati 31 Boston 0. Taliaferro cannot move the woebegone Patriots, and Janik punts only to have back-up running back Doug Dressler block the punt setting up Robinson's third first half touchdown. Bengals 38 Patriots 0.

Boston gained just 24 yards in total offense in the first half, and set a new standard for inept passing...how inept you ask? How about 0 for 10, and one sack for MINUS -10 passing. The Bengals move the chains offense gained 304 total yards.

The second half the Bengals drive 74 yards with Wyche passing to Thomas for the score. Bengals 45 Patriots 0, with almost an entire half to go. Sam Wyche gained the most yards ever in his short career rushing with 63, had a 110.4 passer rating, and threw the last two touchdown passes of his career. Bengal fans voted Bill Bergey the team MVP, and big Bill had a strong game with nine tackles, and with rookie lightning-quick d-tackle Mike Reid again giving a standout performance the shut-out was earned. The season ended in the first round of the play-offs as the future champion Colts beat them 17-0, yet the 1970 Bengals on December 20th, 1970 took their place in history. 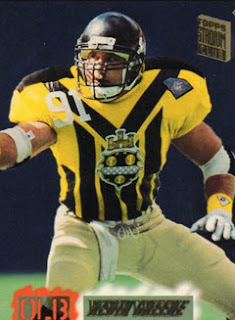 Already John Turney has listed some of the statements from former players concerning Kevin Greene. Was honored to see him play in person as both a Ram and Steeler and of course many times on television. Going to Ram camp every year you get a real sense of what some of these men are all about. Greene was one "wild man" on the practice field, and also one helluva quality individual.