Who You Taking?—Kordell or Taysom? 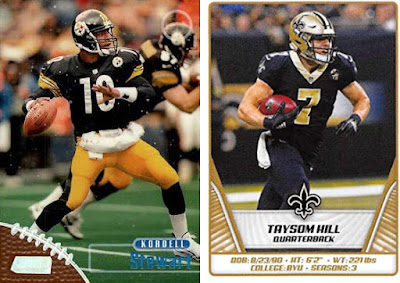 In the two seasons prior to Kordell Stewart becoming a Pro Bowl quarterback he was "Slash"—a player who playing some quarterback, even some option quarterback some running back, and some receiver. he was fast, deceptively so and was very effective, especially as a receiver.
In the last three seasons, the Saints Taysom Hill is similar in that he throws, runs, and catches and does so well, and is particularly good running the ball.
Here are the stats for both, averaging the two seasons prior to Stewart becoming the Steelers starting quarterback and the last three seasons of Hill being the backup quarterback/slash/flex player for the Saints with five games still to be played, of course).

Neither had/have spectacular numbers but they are interesting players because one has to go back to the 1950s to fund players with so play pass attempts, rushing yards, and receiving yards in a season. Especially in back-to-back or even three straight years.
So, who do you take? Slash? Flex? Neither? Both?
Either way, they both made the game more exciting with bigger-than-usual-skill sets. We probably should throw in Kendall Hinton on the Broncos for good measure and his great effort last week versus the Saints and Hill.
Posted by John Turney at 3:32 PM