As if things with the Rams uniforms couldn't get any worse, it seems that sometimes before the end of the season they will wear grey over yellow or what they call "Bone" over "Sol". We will see.

We've reported on the Rams uniform blunder HERE, HERE, and HERE. On that final "HERE" we showd the three iterations the Rams SAID they were going to wear, which were these 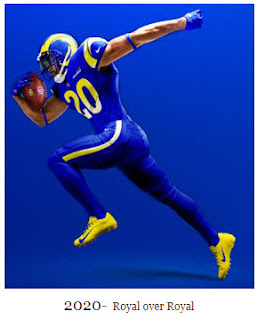 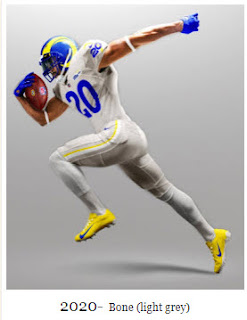 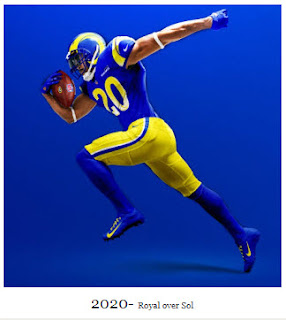 But then, three weeks or so ago the Rams wore this combination, Blue over Bone-in Seattle—This was not part of the preseason released combinations. And, in our view, the worse possible combination due to how color values work and other design issues.

So, now, as we mentioned the Rams, at some point, will wear the Bone over Sol.

So, we'd now expect, because the Rams apparently don't know what the word "uniform" means you can be darn sure the Rams will go with Bone over Royal at some point this season. You can count on it.
We could be wrong, of course, but sometime in December, you'll see the grey and blue and it won't be a Civil War reenactment, it will be the Rams.
Posted by John Turney at 10:04 AM