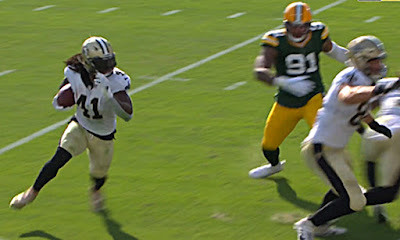 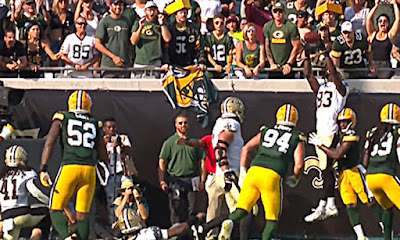 No. 41 Alvin Kamara (above) and No. 83 Juwon Johnson (below)
finish off two monster drives for the Saints in Jacksonville.
(screenshots from NFL Game Pass)

Lump-sum or smaller disbursements over time?

Sunday, the New Orleans Saints chose the latter. Content with extracting payment in regular intervals, the Saints repeatedly gouged Green Bay during a pair of monster first-half drives that set the stage for a 38-3 blowout win.

Those two possessions – back-to-back 15-play excursions – propelled New Orleans to a 17-3 halftime lead. They also kept the ball away from Aaron Rodgers and the Packers’ offense.

The first covered 76 yards, removed seven minutes, 51 seconds from the game clock and was capped by Jameis Winston’s 3-yard pass to running back Alvin Kamara. The second carried 80 yards, chewed up 10 minutes and concluded with Winston’s 1-yard toss to tight end Juwan Johnson in the back of the end zone.

Given time to digest this seemingly relentless advancement by New Orleans, the crew at Fox Sports offered this nugget coming out of halftime. Not since the Vikings of 2000 had a team put together back-to-back touchdown drives of 15 or more plays.

It’s a powerful stat. And it beautifully summed up just how inept Green Bay’s defense was at TIAA Bank Field in Jacksonville.

Nearly 21 years and more than 5,000 games ago, New England served as patsy while the Vikings imposed their will. Now Green Bay sits in the corner, dunce cap squarely atop its head.

Like sculpting with stone, the Saints chipped away at the Packers. They picked up 13 first downs on their second and third drives combined. They encountered five third-down situations, converted three and utilized fourth down – including Winston’s pass to Johnson – to overcome the other two.

Never did they gain more than 17 yards on a single play. Only once did the team lose yardage, that a 1-yard setback with Taysom Hill carrying.

Methodically and purposefully, New Orleans moved the ball. Or, to use an expression popularized by the late Hank Stram who once coached the Saints (1976-77), they “matriculated the ball down the field.”

In doing so, New Orleans gave Green Bay precious few opportunities. While Winston and his unit reeled off 38 first-half plays, Rodgers and his teammates got on the field for just 17. The Packers’ four first-half rushing attempts tied a team low going back to 1954.

What Fox Sports could not report was how often Green Bay has been subjected to consecutive long-haul touchdown drives throughout its first 100 years. Leave it to Pro Football Journal to provide that information below.

Back-to-back TD drives of more than 25 combined plays given up by the Packers since 1921.