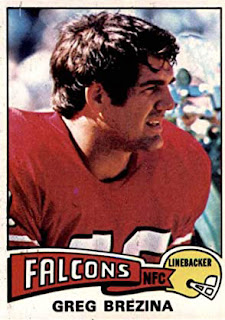 Brezina was drafted in the 11th round (275th overall) of the 1968 draft by the Falcons out of the University of Houston where he was an honorable mention All-American (NEA) in 1967. He was one of five Brezina brothers who played for the Cougars and there and he was a linebacker on the same unit with Wade Phillips.
He was quick but on the smaller side, 6-0, 220 pounds as a rookie, maybe a bit heavier in his last few years. Back then coaches lined their linebackers to be 6-2 or 6-3 and 230 or more pounds. It may seem quaint now, but to a coach, 5-10 pounds and a couple inches or so could cause a player to drop a long way in the draft, which is what likely happened to Brezina. 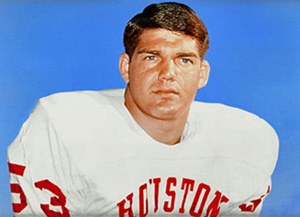 However, in eleven seasons with the Falcons, Brezina played in 151 games, started 114, and picked off 12 passes, had 14 fumble recoveries, and 26 sacks to go with 835 tackles. He was an "excellent but unspectacular player"—which is how the Los Angeles Times described him in 1975. And that was pretty fitting. There is nothing wrong with being "excellent' at your job.
In 1969 (80 tackles, 10.5 run/pass stuffs, and 5 fumbles recovered) he was named as a replacement player in the Pro Bowl, the only time he received any post-season honors from a major "All" team. However, in 1978 he was named All-NFC by the New York Daily News which was a pretty astute pick by Larry Fox who chose the team since that season Brezina totaled 107 tackles, 11 stuffs, 9 sacks two forced fumbles, and deflected nine passes.
So perhaps those couple of years he was almost spectacular. You could also throw in 1977 and maybe even 1975.
He hurt his knee the following the Pro Bowl season and missed all 14 games but from 1971-76 he was a that "steady linebacker" that often made his way into the backfield on running plays, and in 1975 even picked off four passes.
From 1971-73 the Falcons were a competitive team and a decent defense—with the Falcons at least above .500 cumulatively for those three years, but from 1974-76 the wheels came off the team, going 11-31 from 1974-76. 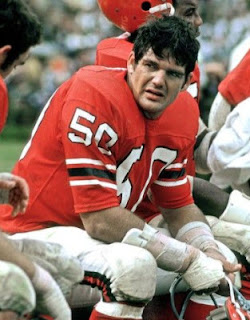 But in 1977 the coach changed (Leeman Bennett was hired from the Rams staff) and defense changed (Jerry Glanville and others were given the keys to the defense and Brezina's role changed to became the right side blitzer. He recorded 17½ of his career sacks in his last three seasons in the new role and the defense made a quantum leap that year.
The 1977 Falcons defense allowed 129 points allowed is the modern-day record for the fewest in a 14-game season (9.2 points per game). It is known as one of the best single-season performances of any defense and even has a Hall of Famer among its ranks—Claude Humphrey.
In addition to leading the NFL in fewest points allowed the Falcons "Gritz Blitz" defense was second in fewest total yards allowed and in takeaways, they allowed the fewest yards passing in the NFL and had a defensive passer rating of 37.4 which was best in the NFL and recorded 42 sacks (tied for seventh) and Brexine led the team in that category.
The scheme was a 4-3 but often went to a 3-man line defense on passing downs and would blitz Brezina, Dewey McClain, or even the inside backers. Simply put the Falcons brought more people than the offense could block and forced quick throws that were often inaccurate or picked or resulted in a sack or knocked-down quarterback.
Under Bennett and Glanville the Falcons became competitive and even made the playoffs in 1978 and won a wildcard playoff game. In Brezina's final season the defense took a step back, but Brezina's understudy at right linebacker, Joel Williams, came alive in 1980, the year after Brezina retired, and recorded 16 sacks and the Falcons, now with a very good offense, won the NFC West. 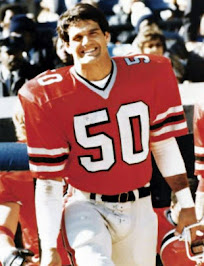 Brezina was not a part of that NFC West title, except perhaps in spirit, but he was part of the late-1970s Falcon turnaround and finished his career on an upswing after those mid-1970s seasons in the cellar and it extended the year after he hung 'em up. Perhaps he helped set the table a bit.
It can honestly be said Brezina had an excellent but perhaps unspectacular career but it is certainly one that is noteworthy being the top blitzer in the famed Grits Blitz defense. That is quite a lot and that will be his legacy in football.
In 1971 Brezina, at a crossroads of his life, became and born-again Christian and after his football career embraced the ministry. He and his wife Connie are partners in a "counseling and training ministry" called Christian Families Today.
The Christian programs he runs now are will be his post-football legacy and that, too, is quite a lot.
Career stats— 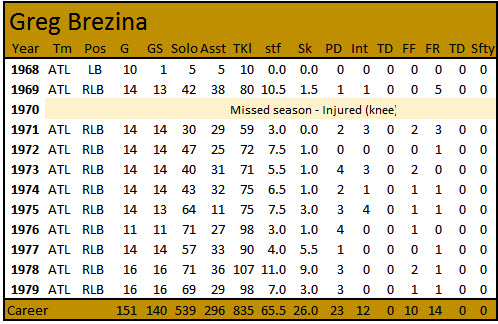