TUESDAY TIDBITS: Is This Finally Our Year?

How enjoyable to watch games with the fans some involved and cheering; felt so good to hear them as I watched on Sunday. Fourteen games across the country, and no doubt we all had the game or games we wanted to see.

The game of the day for me and possibly a play-off encounter in January was the Steelers @ Bills. Half-time adjustments and/or a newfound motivation brought the victory to Pittsburgh. 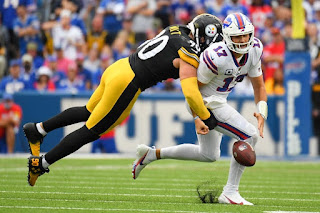 Always there are scores that surprise us? Will that continue? Hell yes! Two divisions are undefeated, and that said...a brief look at the schedule tells us that the NFC West (strongest division in football) plays the AFC South, thus any victory by a team from that division coupled with a winning record against division opponents will bring the division title to that team.

AFC West plays the so-called "Black & Blue" division the NFC North, and as such teams such as the Vikings and Bears who view themselves as Wild card candidates best win at least a couple of those match-ups.

Taking a look back at anniversary achievements; the Rams on September 12th, 1976 tore apart a Falcon team that just could not stop the Los Angeles ground attack. "Ground Chuck" had two 100 yard rushers (McCutcheon & Cappelletti). Historically the Rams have had one of the most prolific rushing games, with many, MANY 100-yard rushing performances. 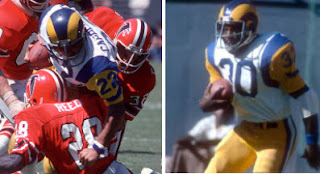 Everyone who read the write-up of the game and Matt Stafford's pinpoint performance will stay tuned to see if he can continue his elite passing and lead the Rams deep into the playoffs. 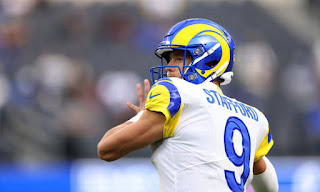 In closing, recently read that former Minnesota Viking center Mick Tinglehoff has left us. He was one of those men who had to wait many years before enshrinement in the Hall, but fortunately, he was alive to be there. Having seen a virtual ton of film of him; would have relished sitting and talking football, and specifically blocking with this durable consistently excellent player. 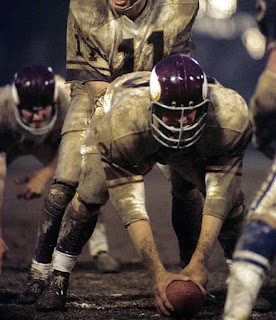 How many centers had the opportunity to attempt to block Schmidt, Nitschke, Butkus, Lanier, Lambert, and hopefully future Hall of Famer Gradishar? His interviews with NFL Films are priceless—especially talking about Butkus.

RIP Mick, you were a valued member of your team and the league.