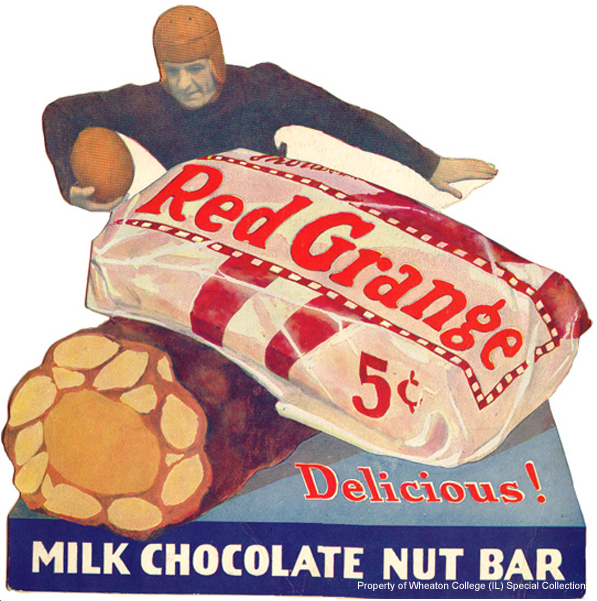 Recently the NCAA has allowed college athletes to profit from their names, image and likeness (NIL). PFJ looks back at the ultimate former college football player who would've taken advantage of this new rule some 100 years ago- Red Grange.

By the time Red Grange decided to leave college to play professional football and barnstorm the country with the Chicago Bears the Shotwell Candy Company was an institution in the Windy City, producing yummy treats to the youth of America. Owned and operated by Alfred Shotwell, Sr., the Shotwell Manufacturing Company had been producing “checkered candied” popcorn, marshmallows and candy bars for nearly twenty years. “Chicago was the candy capital of the country at this time,” said Chip Shotwell, grandson of Alfred Shotwell. “Several candy companies in Chicago, one being Curtiss Candy Company, which was owned by the Schnering family, who made the ‘Baby Ruth’ candy bar. So, my grandfather was well regarded in the city of Chicago.” In 1916 alone Shotwell was shipping eight million pounds of raw corn yearly to its popcorn factory.

During the Roaring Twenties, companies like Shotwell and Cracker Jack, started to insert free promotional items in their products: rings, plastic figurines, stickers and trading cards. When Red Grange turned pro Shotwell noticed the great popularity of the football star and since he was very popular with the young kids of Chicago it was a slam dunk to get Red to help sell candy bars. So, Shotwell agreed to produce a “Red Grange Candy Bar,” a milk chocolate nut bar that would be sold for five cents. Shotwell promotional ads for candy stores to buy the tasty treat read: “Another Shotwell success; a big 2 oz. maple caramel cream nougat center rolled in peanuts and chewy caramel with milk chocolate coating; lithographed glassine wrapper with individual picture of Red Grange; 24 bars in Red Grange display box.”

Promotional boxes were also produced with Red Grange candy bars to be sold at candy stores. “Remember at this time there were candy stores everywhere,” said Chip Shotwell. “So, you put a display up and my grandfather had salesmen who would travel around to these stores to sell candy and you go in and show it to the proprietor and ask for some space to set up your display, and so forth. The nicer they were, the more eye-catching it was.” 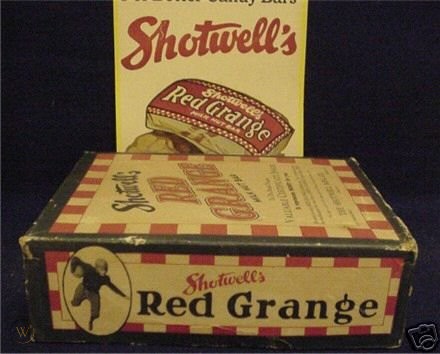 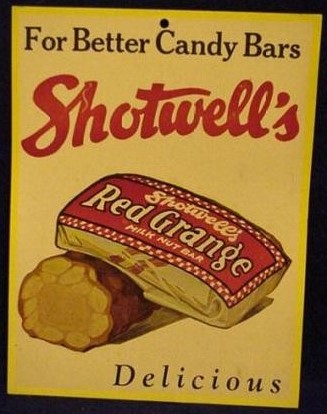 The candy bar would come in a Red Grange wrapper and within that wrapper would be a collector’s card. In early 1926 Shotwell produced a 12-card set of Red Grange cards. The cards measured two by three and one-eights inch, and pictured Red in many different football poses- passing, running, catching, kicking- plus images of him being the “Wheaton Iceman” and wearing his famous raccoon fur coat. Today the cards in good condition can sell between two and three hundred dollars each. In 1926 the card cost just five cents and it came with a delicious chocolate nut bar! 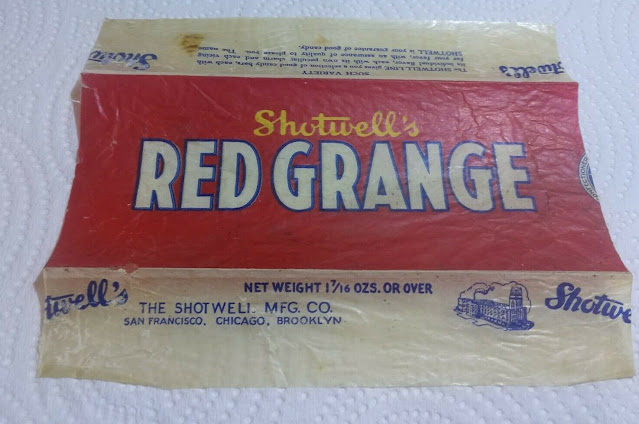 According to the cash statement expense sheet kept by “Doc” Coolley, Shotwell initially paid Red $12,000 for the right to use his name and images for their products. Accorded to the Shotwell family, after the retainer fee, Red was paid $62,000 by Alfred Shotwell. “It involved some royalties. He was paid, $62,000 dollars, which was a hell of lot of money back then,” said Chip Shotwell. “Oh yea, my grandfather would go to the games and take my dad with him. Red called my father ‘Shotsie.’ Dad always loved to visit and stop by to see Red (when he retired in Florida). He was the salt of the earth. The nicest guy you would ever meet. And very quiet about his history and his accomplishments he did, about how great he was, he didn’t do any bragging, he was very humble.”

Also in 1926 Shotwell released more collector’s cards within the wrapper of the Red Grange candy bar. This time (umber of cards) featured scenes from the movie “One Minute to Play,” starring Grange that was released in the fall of 1926.

The Shotwell family always cherished their relationship with the Galloping Ghost.

“It’s exciting,” continued Chip Shotwell. “He was a figure in the history of Chicago, University of Illinois and the history of the NFL. To have a family connection to that is very exciting. It’s some history that is really pioneering. Who knew the NFL was going to make for two seasons. You know. It did. It’s exciting.” 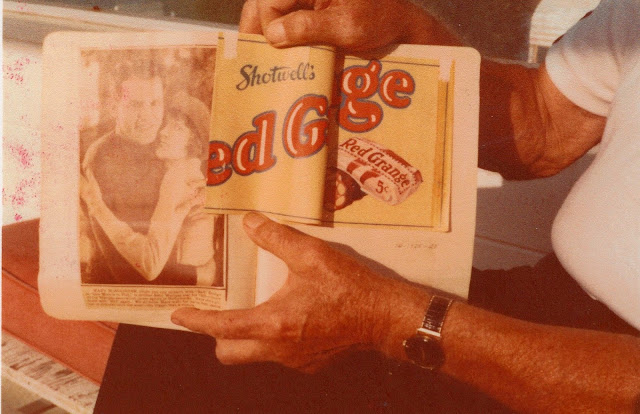 Its been nearly 100 years since the Red Grange Candy Bar was sold to the public. Who knows how much the Galloping Ghost would've made today with his NIL income. Back in 1926 he made a good penny! 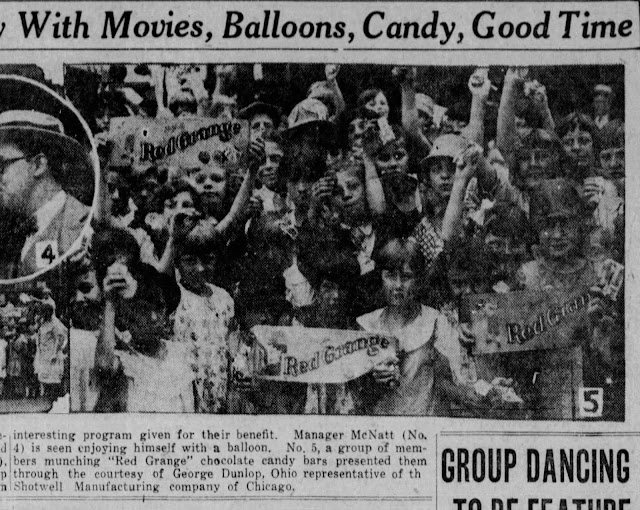 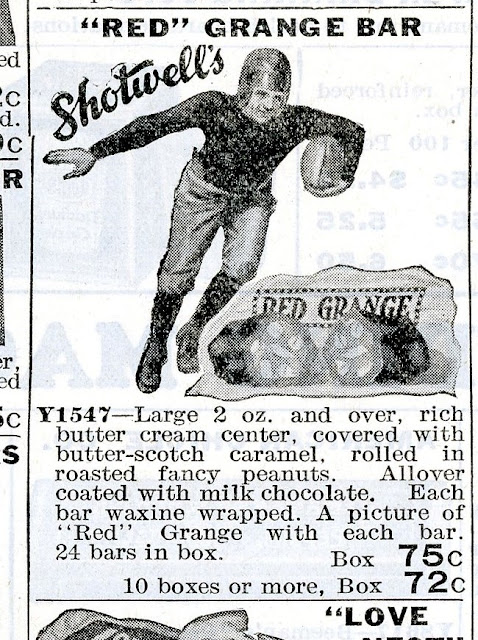 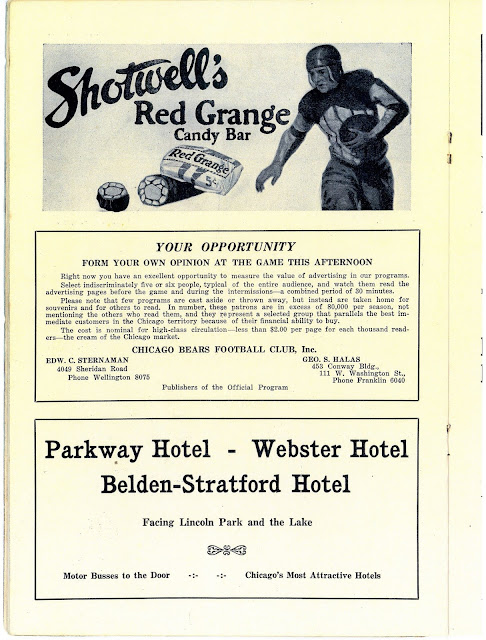