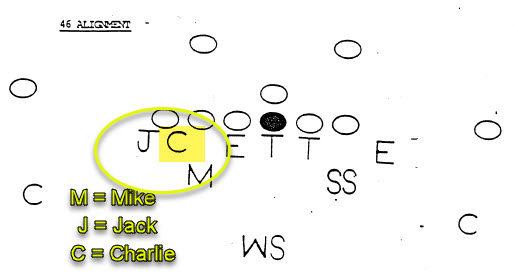 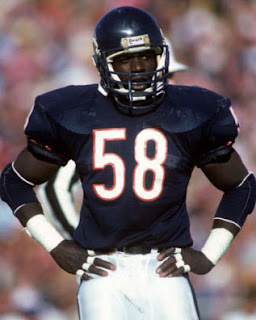 In the '46' Wilson, as the Jack, was the edge defender and rushed most of the time and Marshall was often in man coverage on the tight end as the 'Charlie', though he'd blitz as well at times making him the more complete linebacker of the two outside guys on the great Bear defenses of the mid-1980s.
Illustrating that completeness consider this—since 1960 Marshall is the only linebacker to have 4 or more sacks and 4 or more interceptions in a single season three times. He did it twice with the Bears (1985-86) and once with Washington (1991).
In the 4-3 base D (what Ryan called 'Pro') he was athletic enough to slot cover receivers and the best of receiving backs. He was also a devastating hitter, giving the proverbial Ronnie Lott "Wooo hits" with regularity. In our view, he was just a wonder to watch—certainly passing any 'eye-test' anyone would want to throw out there.
After the 1987 season, Marshall signed as a free agent with Washington and the Bears received two number one draft picks as compensation. The Bears actually tended an offer for Marshall but he signed with Washington anyway opting for the five-year, $6 million contract offer that made him the NFL's highest-paid defensive player ever. The Bears could not match the terms since Washington's contract was guaranteed and also had a no-trade clause in it as well.
All that kept Marshall from holding out in 1988 (like Al Harris did in 1985) as he had threatened to do if he didn't get the type of compensation he was worth.
In the Nation's Capitol, he was able to continue his high level of play. though there was an adjustment period in 1988 playing in Richie Petitbon's defense (George Allen's defense). 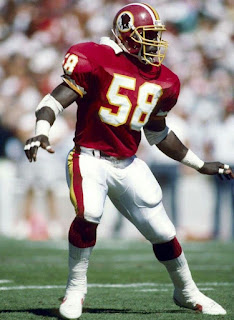 In 1991 he moved to the left side and got post-season honors that year and in 1991 and in 1991 he got his second Super Bowl ring.
At this point in his career his knee problems began. He re-joined Buddy Ryan's defense in 1993 with the Oilers and then followed him to the Cardinals when Ryan landed the head coaching job there.
Washington made Marshall their "Franchise player" after the 1992 season so he couldn't become a free agent. Mashall actually sued and then appealed that designation but lost the appeal. The saga dragged out for a couple of months until May when Washington and the Oilers were trying to work out a deal to get Marshall to the Oilers but there were differences in opinions as to the amount of money that was offered by Houston. The Oilers had offered (or not) Washington a first- and fifth-round pick if Houston could sign Marshall. 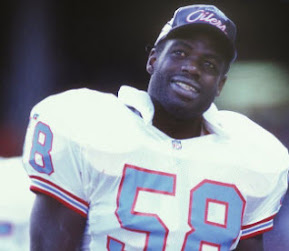 All this led to a lawsuit against the Oilers for breach of contract because he alleged there was a deal in place but the Oilers claimed they had retracted their offer before a key fax arrived in Houston. The fax allegedly was the agreement.
The parties agree to take the issue out of the courts and to NFL Commissioner'sPaul Tagliabue's desk. He decided to enforce the terms of the deal with a slight alteration in compensation (Washington got a third- and a fifth-round pick rather than the original first and fifth and thus after about three months Marshall became an Oiler.
He played well at times but had knee issued and a rib injury so he just was not himself and since he signed a one-year deal he became a free agent and Houston did not offer him a contract. 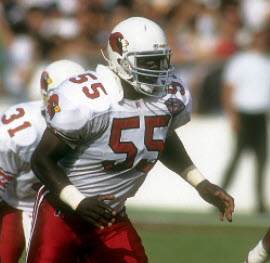 So, he was Buddy Ryan's Charlie 'backer again in the Desert and just like in 1993 he was good but not great and after that year he was once again a free agent but he remained unsigned until late August when the Jets had injuries at linebacker and signed marshall to fill in. With the ers he played 15 games but starting just a handful of those games. In none of his last three years was he able to perform as well as he had in his first nine seasons. 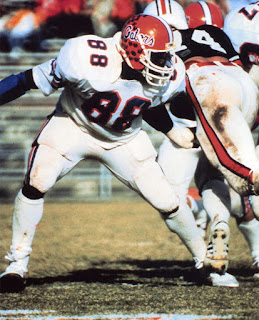 At the University of Florida he was All-American in 1982 and 1983 and was a three-time First-team All-SEC selection as well. He was also a finalist for the Lombardi Award in both 1982 and 1983.
He was a member of the Gainesville Sun's "Team of the Century" in 1999 and was inducted into the University of Florida Athletic Hall of Fame and to the University of Florida's Ring of Honor.
Marshall was elected to the College Football Hall of Fame in 2008.
He attended Astronaut High School in Titusville, Florida, and was a High School All-American. He is a member of the Florida High School Athletic Association named Marshall to its "All-Century Team".
Coming out of the Swamp Marshall was the  (11th overall) of the 1984 NFL Draft but he was almost the second-overall. The Patriots traded up for the first-overall and signed Irving Fryar prior to the draft. Since the Oilers had the top pick at that point (second overall) they had the right to negotiate with Marshall prior to the draft but the two parties we not able to work out a deal.
After his career Marshall's injuries left him disabled and he was treated for the pain with prescribed pain pills (always guarding against potential addiction), anti-inflammatory injections in his battered joints.
For his career, he had 45 sacks, 23 picks, 24 forced fumbles, and 16 fumbles recovered. He's one of three linebackers to have 45 or more sacks and 20 or more interceptions
Marshall was All-Pro in 1986 and 1991 and was All-NFC in 1986, 87, 91, and 92. He certainly was Pro Bowl/All-Pro level in 1985 and likely 1990 as well.
In 1992 he was the NFL Linebacker of the Year by NFL Alumni and the NFC Linebacker of the Year by NFLPA. He was voted as one of the “100 Greatest Bears of All Time” as well as one of the “80 Greatest Redskins.
Marshall has not gotten a ton of notice from Hall of Fame voters, likely due to the fact he tailed off at the end of his career. His greatness came from 1985-92 and even then he was a bit light on post-season honors (All-Pro, Pro Bowl, etc.) because it was an era that reward the 3-4 outside linebackers, the sackers rather than the complete linebackers that are common now and were the standard from the time the NFL defenses turned into a 4-3 league which was roughly the mid-1950s through the late-1970s.
In fact, in the mid-1980s there were just three teams that didn't switch to some form of the 3-4—Dallas, Washington, and the Bears. All other teams had switched (and some switched back at times) and by the time the NFL was back to a 4-3 league, Marshall's career was basically over.
Regardless, there is a big place for Marshall in the league's story—he was a major factor in two championships and was the best at his position, at least for a time, and he was a complete linebacker in an era of guys who were not three dimensional (played the run, covered and rushed). Additionally, he played well in the playoffs and made key plays throughout
So there is a lot to be said for Marshall. A lot.
Career stats— 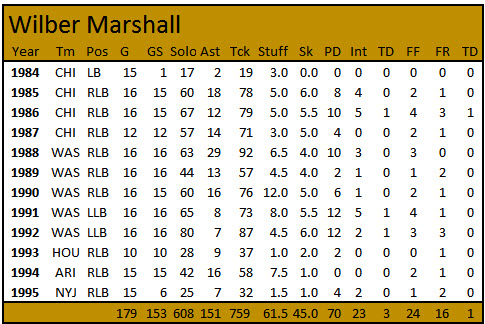