TUESDAY TIDBITS: "Back in the Saddle" 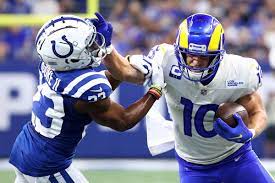 Middle of July attempted to order a ticket for the Rams @ Colts, and am convinced due to the lack of professionalism that the CEOs of both Vivid Seats & Ticketmaster they will both be able to find employment at a Wuhan Lab sweeping floors and taking out the trash.

Really wanted to attend this game, and as such contacted Matt Conti of the Colts. He had Ms. Katie Voelz contact me, and eventually, after making the drive Sunday morning got my ticket at the will-call window.

There are organizations that have sure enjoyed working with over the years, and the Colts are right at the top of the list—from my days communicating with the distinguished Mr. Craig Kelley to Matt Conti; these guys just know how to treat people.

Ok, back to the game. Lucas Oil Stadium is a terrific place to see a game, and sitting next to me is a young couple wearing Rams gear, and of course asked if they are from California? Michigan, oh, I get it—Matt Stafford fans shifting allegiance.

The hard-fought game was almost entirely free of penalties thus the "zebras" could not control the action, and flowed strongly all afternoon. So many outstanding players on the field. Where do I begin? How about d-tackle with massive DeForrest Buckner (who was able in pursuit) to squat Aaron Donald who played his usual strong game. Both Nelson and Leonard had their moments at guard and linebacker respectfully.

Then Indianapolis rallied to take the lead on the fumble recovery thought that this just might be an opportunity for Stafford to display his talents—and yes he did. He is building a synergy with Cooper Kupp, and after the Rams dedicated receiver had made numerous catches already, thus the Colts decided to double cover him. Stafford read the coverage expertly and immediately pitched to Woods.

One of my favorite songs by Aerosmith is "Back in the Saddle" and boy oh boy felt like I was back in the saddle on Sunday as I absorbed all aspects of the game. Not sure if the Colts are the best 0-2 team in the NFL, but their game on the road this Sunday in Nashville should be a dandy. Avoiding injury the rest of the season the Rams are certainly going to be a factor and taking on the defending SB champs from Tampa should be game of the week.

As for our historical journey; let's head to War Memorial Stadium on September 19th, 1965. The defending AFL champion Bills have been a strong team since the middle of the '62 season, and already have a victory over the Patriots. Buffalo is a team that wins on defense, and a powerful running game-—though strong-armed Jack Kemp can make every throw.

Late in the first quarter with a 3-0 lead Kemp lofts a long pass up the right sideline for flanker Elbert Dubenion who has raced paced future Hall of Fame corner Willie Brown for a 48 yard catch even with Brown having safety help from John McGeever. Buffalo punches it in, and goes on to a 30-15 win. Golden Wheels Dubenion caught 5 for 103 yards, and his race horse speed and improved route running enabled Buffalo to have the deep threat every team wants, and needs.

Though Dubenion had strong games against other opponents, the only team that he averaged 20 yards a catch against in his career was Denver. The next week (again at home) Dubenion made a sliding catch in the end zone against the Jets for 11 yards and a touchdown in the 3rd quarter, and severely injured his knee. He recovered to continue his career, but was just not the same receiver. Buffalo defended their title in December in San Diego, and were the dominant team in the mid-60s in the AFL.