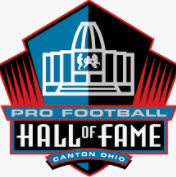 David Baker, the President of the Pro Football Hall of Fame, abruptly stepped down last week and was replaced by Jim Porter. By all accounts, Porter is a man of integrity who is from the Canton area and has been on the Hall of Fame board. He comes from the newspaper business which should give him excellent rapport with the Hall of Fame voters and should be able to remember their names and is likely already on a first-name basis with most, if not all of them.
Yesterday, Porter did an interview with Clark Judge and Ira Kaufman on "Eye Test for Two" and when asked about possible changes in the structure of Hall of Fame classes said, that he wanted to keep the integrity of the process and that it remains consistent and that was "important to him".  He wants all the players and coaches and contributors to go through the same process and that essentially all be vetted similarly so the standards remain high, at least that is our interpretation. We would agree 100%. No free passes.
Then, after some prodding by Judge and Kauffman, Proter said he was open to possible changes in the number of seniors being increased and perhaps even increases to the total number of inductees from right to perhaps nine adding that there would have to be a process of input from voters and that the changes be approved through the Hall of Fame and so on. But the bottom line is that changes were possible in the future.
So, if the number could increase from eight to nine—and we are speculating here—that could mean adding a senior without cutting a contributor and coach, meaning rather than raising the seniors to two, as it used to be, and rotating a coach and contributor every other year there could be two scenarios and one coach and contributor plus the five modern players which would be none total inductees.
Or, there could be two seniors and the rotation of a coach and a contributor and six moderns. Either way, nine would be good. We won't hold our breath on that one but it would be a good thing if it were taken seriously.
Porter then told the hosts "I want to know from our voters what we're doing wrong".
Well, we have nothing to do with the voting but these suggestions by Judge and Kaufman were spot one.
Here is what you are doing wrong, and yes, we are being facetious—You are delaying changes! You have been on the job for almost a week!
Here is what you need to do Mr. Porter—
Call an emergency meeting of the board. Have a zoom call with the voters and add the second senior slot. It is as simple as that.

Do not wait for the current structure that is in place through 2024 to expire. Get it done now. Yesterday, even.
It was errant to take away the second senior slot in the first place and worsened the problem of the senior backlog and the one we think was the architect of it is now gone so there is no one to lose face over a change back to the way it was.
Yes, yes, of course, the Hall must cross the "t's" and dot all the "i's" and give the appearance of due diligence but this is a no-brainer. No one we know thinks there are two few seniors getting in the Hall of Fame. Even when two-a-year when getting in there were still worthy players waiting.
The universe of worthy coaches and contributors is much smaller than the universe of worthy players by any objective measure.
So, even if the number of inductees stays at eight, two seniors must be part of the mix and the coach/contributor rotation can be instituted.
If the number can possibly be expanded to nine, even better—simply have two seniors and keep one coach and one contributor. Simple.
If the number can be nine and the new addition is a modern player (to keep the senior pool from expanding), then it should be two seniors and the coach/contributor rotation to reach the total of nine. Again, simple.
But do it now, not in 2024 or 2025
Not making this your FIRST order of business is what you are doing wrong.
Hall of Fame fans are counting on you and there will be close to 100% support from your HOF voters on some form of the versions we've outlined in this post.
Posted by John Turney at 10:52 AM