Rams Trade Kenny Young for a Swap of a 7th Round-Pick for a 6th—Or Did They?

By John Turney
We've written about trade strings before. How one pick can be exchanged for another, then another until the fill value of a pick can be realized by a team. Here is one post. Here is another. There are a few more we've done. You can search for them.
The Kenny Young one is interesting because it involves lots of low-round picks and current rosters members and for former top pick by the Rams that goes back a long ways.
So, where to begin?
The Rams acquired Kenny Young from the Ravens with a 5th round pick for Marcus Peters. That 5th rounder went to the Dolphins to take Aqib Talib's salary off the Rams' hands and in return, the Rams got a 2022 7th round pick.
Young was sent to the Broncos this week plus a 2024 7th rounder in return for a 2024 6th rounder.
Talib was acquired for a 5th round pick, so that was the 5th round out. Peters was acquired for a 2nd round pick and a 4th but the Rams got a 4th rounder back.
So, that is a 2nd, 4th, and 5th out, for Peters, Talib, and a 6th rounder in. Follow? We will clarify later.
Now, what was done with the picks? Of course, the 2022 7th and 2024 6th are in the bank, earning interest.
But the Rams had the 6th from the Peters as well, but we will get to that shortly.
The Rams had two 6th rounders in 2018 that they shipped back to the Broncos for that same 5th they sent to Denver for Talib. With that 5th they took linebacker Obo Okoronkwo.
How did they get those two 6ths? One they got from the Raiders for dropping two slots in the 3rd round and they took Joseph Noteboom who would have been there at 87. So, basically, it was a free 6th rounder. The other 6th came from sending Robert Quinn and a Rams 6th to the Dolphins. It was the lower of two picks the Rams acquired for their 2011 1st rounder. The other higher pick (a #4) was used to take starting center Brian Allen.
Back to the 6th round from Peters. It was a sweetener in the deal for Brandin Cooks. That 6th and a #1 went to the Patriots for Cooks and a 4th rounder. That fourth was used to acquire a 5th and 6th (#197) rounders from the Panthers—like splitting Aces in blackjack. The 5th rounder was used to take linebacker Micah Kiser.
It gets complicated here. That 6th (#197) rounder was pared with another 6th rounder
The Rams had a 6th round pick from trade former #1 Greg Robinson to the Lions for a 6th (#194) round pick. The Rams traded that to the Falcons for two 7th (#244 and #246) rounders. The Rams traded one those 7th (#256) rounders.
So, in one of those trade value chart trades the Rams sent Washington one of the lower 6ths (#197) and the 7th (#256) rounder for two 6ths in the middle that Washington owned (#205 and #231). Savvy?
With the two #6s the Rams took linebackers Trevon Young and Traven Howard and with the still unused 7th they took another linebacker Justin Lawler.
So, a 3rd out, Quinn out (former 1st), Greg Robinson out (former 1st), five 6ths out, two 7ths out, Cooks, a 3rd, a 4th, two 5ths, and four 6ths in two 7ths in.
Now the Rams had Cook. They sent him to Houston. What was the net-net of that? The terms of that deal was a 2020 2nd round pick and a 2022 4th rounder. That #2 was wide receiver Van Jefferson who is making excellent contributions to the club.
Now the real can of worms which we won't go into (but we could) but just remember this—Greg Robinson was part of the 2012 Robert Griffin trade. And that trade had implications in the Goff trade (as did Sam Bradford) which brought Matthew Stafford to the Rams with help from the Dante Fowler trade and his leaving to sign with the Falcons.
And Fowler going to the Rams was, in part, compensation for losing Sammy Watkins (the other part was Terrell Burgess). Also, in trading for Watkins in 2018 the Rams gave up E.J. Gaines (a 2014 #6) and a 2018 #2 pick but in return got a 2018 #6 selection which the Rams took Sebastian Joseph-Day—their starting nose tackle.
But again, this is kind of tangential to the original trade string but these things can really get entangled and confusing and this is one of the hardest we've tried to unravel.
Again, not going into super-duper detail the Griffin deal brought the Rams years of services from Alec Ogletree and Michael Brockers. Brokers will be bringing in a 2023 #7 pick and Ogletree brought in a #4 and a #6 and those were used to draft John Franklin-Meyers and John Kelly. The Rams cut  Franklin-Meyers in 2019 which seemingly was a mistake in that he's played very well with the Jets who picked him up right away and he just signed a big-money deal with them.
So, the Griffin deal won't be closed until that 7th rounder is used in 2023 since the Greg Robinson pick (#6-2018) has been completed unless Traven Howard gets traded for something. He's the last thread on that string.
So, let's total the "string"— 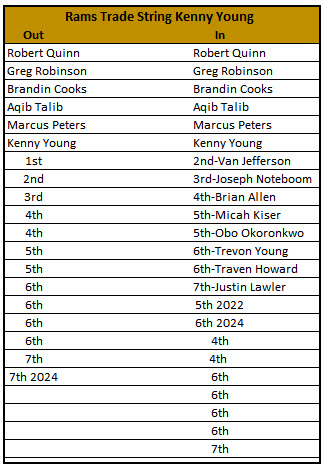 The Rams got good use out of the "in" players with the exception of Greg Robinson then unloaded them. Quinn is still productive but not what he was in his prime. Peters is still productive but is out this season with a torn ACL. Cooks is productive and Young, we shall see but his situation is set up for him to be a good player, knowing the Fangio system, more or less.
Allen and Jefferson are starters, Noteboom has started some and is penciled in to take Andrew Whitworth's place at left tackle but that remains to be seen. Howard and Lawler are backups. Kiser was a starter last year but was cut this year and replaced in the starting lineup with Young and was picked up by Denver and due to injuries ended up starting. Then he got hurt causing the need for Denver to acquire Young in the first place meaning Young took Kiser's place twice in one season for two different teams.
Certainly, Les Snead and Sean McVay don't look at these trades the way we just did. They just make the trades and look at them as inventory, not really connecting which pick came from where except in some cases.
When Goff was acquired Snead did make special mention that one of the #2s came from the Bradford trade (Rams also got Nick Foles and there was a swap of a #4 and #5 between the teams) and that one of the #3s was a compensatory pick for Rabbit Jenkins.
But nothing was mentioned that the #3 that went to Detroit came for Dante Fowler, at least that we could find, this making the Stafford acquisition a bit cheaper when explained as they did with Goff and the mitigation with the Bradford and Jenkins picks.
Nonetheless, it is fair to say Trader Les is working the picks, high and low to bring in players. In this case, it was mid-to-late round linebackers for the most part plus a couple of linemen and a really good receiver not to mention the loosely connected players Joseph-Day and Burgess.
He still has a couple late-round future picks plus the one for Michael Brockers. Let's see what happens with those and see how long this string can last.
Posted by John Turney at 7:32 AM