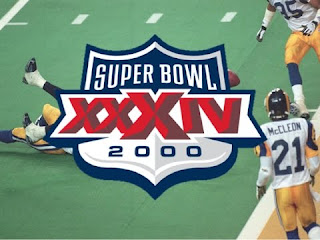 As we approach mid-season the standings now indicate which teams have a shot at the playoffs, which teams should be looking at the draft(and possible coaching changes), and the handful of teams that are truly strong enough in all areas to make a Super Bowl run. When the schedule came out not sure how many folks circled the Thursday evening clash between the Cardinals and Packers as must-see viewing?
October 28th, 1945 the Packers are defending league champions, and the Cardinals are now in the t-formation and going it alone after the debacle known as Card-Pitt in '44. Though slightly improved in 1945 no one believed that in three years the Chicago Cardinals would be one of the strongest teams in the league and that the Packers would rank with the worst teams in the league? So, here we are in 2021 and this game should be compelling football and I will have my Smokehouse almonds, and Dr. Pepper's ready.
Each week really enjoy going back in history and weaving my tales about games and teams of the past(bet you knew that). Ready for our journey into history?
Here we go—October 24th, 1976, and the Philadelphia Eagles under new coach Dick Vermeil are at home in Veteran's Stadium to take on a Viking team that has won 39 of their past 48 games, and were defending NFC Central Champions. 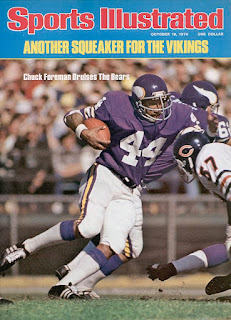 Versatile running back Chuck Foreman sets a Viking team record as he gains 200 yards in 30 carries in the Minnesota 31-12 victory. Do not have the complete game film, but one play stood out where Ron Yary down blocks and creates a running lane big enough for a Minnesota snowplow. Since Vermeil was mentioned, he is part of the rest of today's saga.
The Rams have played in Cleveland and won a championship, the Rams have played in Los Angeles and won a championship, but now in St. Louis as former showgirl Georgia F. moved the team they have had nothing but failure.
Enter Dick Vermeil. Much had been written about his coaching career in Philadelphia, and he had been away from the coaching wars for many years, yet here he is attempting to rebuild the Rams and make them contenders? Neither Street & Smith's or the NFL Insider magazines predicted much success for the Rams in 1998.
Vermeil won his first game in 1997 but had to endure an eight-game losing streak as St. Louis won just five games. Years ago received a letter from Steve Sabol asking me to join him in contributing to his next creative endeavor "America's Game". Humbled and honored and up to the task sent Steve detailed information on the best twenty champions that he should have on his list.
When handing him the paperwork in his office, the smile on his face told me that I had done my job well (and it was sure fun). Viewing America's Game on the 1999 Rams over and over and carefully listening to the comments by Kurt Warner, DeMarco Farr, and coach Vermeil there is no doubt this is one helluva tale to tell. No one, and I mean NO ONE, saw the Rams in '99 becoming champions.
The '98 season was much like '97, and in fact, the Rams won one less game. DeMarco Farr regales us with his views of the hiring of Vermeil, and how hard the practices were in those first two years, but only nine wins. Dick Vermeil had changed in some areas, yet his belief in "gotta go to work" had not. Before going any further, will briefly go back to Mater Dei High School and 1980. Though will be buried in navy blue & burnt orange, coach Armstrong of the Bears was just not my type of coach, but Vermeil having worked for George Allen and what he had accomplished at UCLA was!
When the Eagles beat the Bears in the playoffs in '79 was just so damn impressed with how Philadelphia played, thus—my Mater Dei Monarch sophomore football team in 1980 was going to be coached just like the Eagles were under Vermeil. To this day, and you can sure ask my former players, they would relate how demanding and unrelenting practices were. Those 41 young men hated, and I mean hated being on the practice field with me during the week. We hit, we scrimmaged, and the drills we did were not only challenging but draining. Add to that the conditioning, oh yeah, the conditioning...and game day was like a day at the beach. Had one assistant, so basically I, much like Vermeil in Philadelphia coached everything.
That team once they realized at such a young age that EVERY week was going to be like this, gave effort and "bought-in". The reward for them was very simple and basic, they continued to improve their skills, they came to realize they were tougher than every team we faced, and since there were 21 starters(only one player was deemed talented enough to start both ways), and substituted frequently they all were a part of a team that played for the league championship. To this day they are my favorites forever (for many reasons).
Now back to the Rams, and thanks for enduring my personal story in 1980. The pros in the NFL usually do not practice that long or hard, and when you are not winning, well, as Dick states if the Rams don't win in his third season, he would be out of a job. Philadelphia did not win in Vermeil's first two years, but in that magical third season of '78 he guided them to the play-offs and built off of that to continue the upsurge to the game for the silver trophy.
The Eagles in the mid-'70s could not stop the run, thus Vermeil had the defense changed from a 4-3 to a 3-4, and his d-line was the focus as he knew he had to have better players. His linebacking corps was superb with Bergey, LeMaster, and Bunting. Ah, John Bunting, a man who never got his due as a player, yet here he is helping Peter Guinta with the defensive game plans, and coaching the linebackers for the Rans. 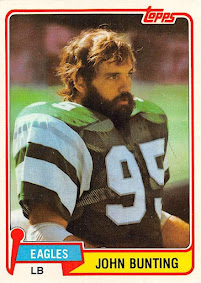 Vermeil relates in the America's Game saga that he had grown, adapted and adjusted in that he did not coach everying, and though at times still intense, he was so much more relaxed. The offensive coordinator Mike Martz had at one time coached at the Community College level (Santa Ana), and Vermeil also had Junior College football in his background, and yes the author also has that on his coaching resume.
Martz was aggressive in his attacking style of offense, and he had worked wonders with Trent Green in Washington, but Green is out for the season with a knee injury, and his replacement ("We will rally around Kurt Warner, and we will play good football")...Kurt Warner? Every scout goes to the HyVee market in Iowa to find the next all-pro quarterback, right?
Dick Vermeil tells us that only eight men were with him in 1999 from his first team! So, let's take a look at his personnel especially concentrating on the defense. 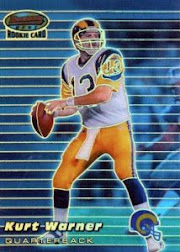 First up though his offense. Vermeil made a great/significant trade for Ron Jaworski and he was truly outstanding in Philadelphia, and Kurt Warner has his bust in Canton. Though they have very different styles in throwing the ball, the one similarity is the Bill Walsh credo of "decisive and accurate".
Wilbert Montgomery was an outstanding running back, and Vermeil sure gave Lawrence Phillips every chance, but his personal demons left the Rams searching, and again one of the truly significant trades of all-time—Marshall Faulk. The draft brought Torry Holt to join a once again healthy Isaac Bruce, and the St. Louis offense has firepower, playmakers, and versatility in so many weapons in the Vermeil offense.
Jim Hanifan is one of the best offensive line coaches in league history, and his men continued to improve, and grown, and with Warner's quick-release they had a chance to put points on the board. How many points you ask? How about 526, and no that is not a misprint. Not sure about that greatest show on turf stuff, but every defensive coordinator must have spent the midnight oil trying to figure out if and how to stop the Ram offense. Now to the defense, as Vermeil knew that improvement on that side of the ball would truly make them playoff contenders. 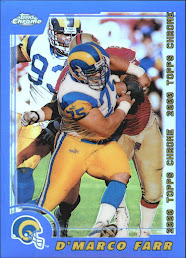 The Rams in 1998 allowed over 2,000 yards rushing, and 378 points. Since he had two excellent defensive linemen in Kevin Carter and DeMarco Farr and a stalwart run defender in Ray Agnew...he just needed a defensive end who could rush the passer, and pursue, and coach Vermeil already had him in second-year pro Grant Wistrom.
Much like George Allen who inherited a staunch defensive line-----Vermeil upgraded his linebacking corp. Mike Jones was rock solid, and though Roman Phifer had played well, he left the Rams and was replaced by Todd Collins, a player who learned under Parcells & Belichick, and could play the run, and tackle. Lorenzo Styles is discussed in the publications as the "new" middle linebacker in St. Louis, but the job goes to unheralded London Fletcher.
Was he the missing piece to the Rams defensive puzzle? No, since the Ram defensive improvement is the sum of the parts. Fletcher was a dramatic improvement as the Rams allowed only 1189 yards rushing in 1999. Keep in mind though since the offense had built big leads, opponents passed more in attempting to get back in the game. Still stopping the run was a key, and Vermeil had a front seven and some depth; thus some creative packages in the "nickel" defense, and rushing the passer (from 50 to 57 sacks 1998 to 1999).
The Ram secondary had a defensive passer rating of 80.5 in 1998(league average was 78.3), but in 1999 they ranked second at 64.1 (league average was 77.1). How did this happen you ask? Ryan McNeil was a ballhawk at corner, yet was replaced by Dexter McCleon, and though he would not be ranked as one of the best corner's in the league, he was feisty and was more than adequate in coverage. 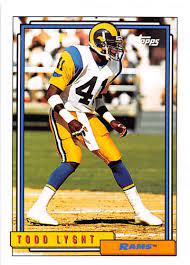 Todd Lyght finally reached his peak at left corner. Talented, athletic, and smart, he played just outstanding in 1999. The safety positions again were manned by Billy Jenkins at strong safety, and Keith Lyle at free. Jenkins did his job, and Lyle was excellent in pursuit, and played stellar pass defense, but was injured during the regular season (he returned for the playoffs), and Devin Bush did an adequate job down the stretch. The key was in the "nickel" as rookie Dre Bly was savvy beyond his years, and a playmaker. The St. Louis Ram defense scored eight times, yes EIGHT TIMES during the season—talk about opportunism.
The playoffs were dramatic in the difference in the games....86 points total in the Viking game, 17 in the NFC title game against Tampa Bay (thank you Rickey Proehl), and the ebb and flow of the Super Bowl XXXIV against Tennessee in the rematch of one of the three regular-season losses.
Was a guest of Steve Sabol for that dramatic victory, and at times reflected back to my many afternoons in the Coliseum and Angel Stadium watching the Rams play. Was one helluva game with the iconic finish. October 24th, 1999 the Rams destroyed Cleveland 34-3, but who knew that they would help change football history and win their only Super Bowl win at the end of the season under one of the best coaches ever, and a role model for me.
Posted by TJ Troup at 1:00 PM