Aaron Rodgers at Home in Win Over Pittsburgh

At what point in his illustrious 17-year career did Aaron Rodgers turn Lambeau Field into his home away from home?

Did that happen after his first victory there? Did it come about after he and his mates went unbeaten there in the regular season for the first time? When they finished without a loss for a second time?

Exactly when the future Hall of Fame quarterback from Chico, California transformed the 65-year-old stadium into his favorite playground may never be known. But he continued to excel there Sunday as he guided the Packers past the Steelers 27-17 before a partisan crowd that has come to expect victory whenever No. 12 lines up under center in the historic venue.

Rodgers has had better outings than he did against Pittsburgh. He completed 20 of 36 passes for 248 yards and two touchdowns for a passer rating of 95.8, an efficiency mark he has exceeded 66 times at Lambeau Field.

Rodgers has made more splash plays. He completed five passes of 20 or more yards, a total he has bettered on a dozen occasions.

But, as Rodgers has done since opening day 2008, he again proved all-but-impossible to defeat at Cheesehead Central.

For Rodgers, this was his 100th regular-season game at Lambeau Field. He joins Brett Favre (118), Mason Crosby (114) and Donald Driver (102) as the only Packers to have played in 100 or more such games at the site. 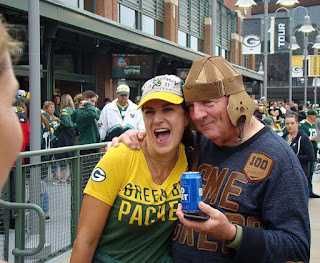 Just how important is Lambeau to Rodgers? He has 25 more wins there than he has on the road (52-46), and his winning percentage when out of town (.531) is markedly inferior.

Rodgers has thrown 420 touchdown passes. More than half (224) have come in front of the home crowd.

Rodgers has been picked 91 times. Fewer than half (37) have been waylaid when the mailing address reads 1265 Lombardi Avenue.

All this is reflected in Rodgers rating at home versus elsewhere. He’s nearly 10 points better in Green Bay (108.8) than when on the road (99.2).

Give him a lead at halftime, and he’s nearly invincible. Including Pittsburgh, where the Packers were up 17-10 after two quarters, Rodgers is 66-1-1 (.978) when Green Bay is out front at the break at Lambeau Field.

He’s not bad either when he avoids throwing an interception while tossing two or more touchdown passes. In firing a pair of scoring strikes to Randall Cobb against the Steelers, Rodgers improved to 43-3 (.935) under those circumstances.

Favre is the only Packers quarterback to go without a loss at Lambeau Field in three different seasons (1996, 1997 and 2002). Should Rodgers equal that accomplishment in 2021, Green Bay will likely be playoff-bound for the 11th time in his 14 seasons as a starter.