TNF: The Rams Blocked a Michael Dickson Punt, or Did They?

By John Turney
So, it looked like a blocked punt, it sounded like one. But it wasn't. Your eyes are not lying to you the official scoring is.
This is how it reads in the official Gamebook—

It reads like a dry, normal, albeit long punt and it was anything but that.
What really happened is Jones blocked the punt and the ball was spinning like a top on one of its points, Dickson scooped it up and ran upfield and just before he reached the original line of scrimmage he punted 68 yards downfield.
Many who saw it were sure it was going to be a penalty including Fox analysts Troy Aikman, "Well, that's coming back".
But it wasn't. Even Fox's broadcast official Mike Pereira, said that the play was illegal but he seemed to be unaware of a new rule.
Here is how the rulebook reads— 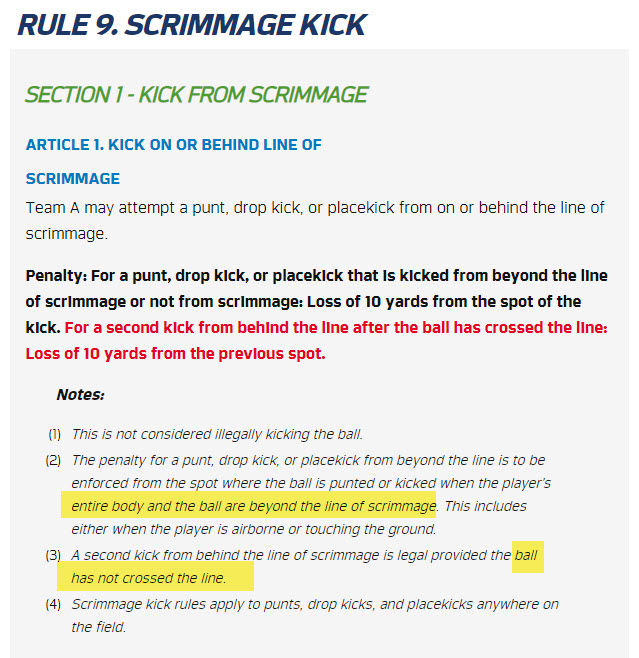 So, it was legal. We've seen it tried before, but this was the first time it was legal and a punter took a disaster of a play that often results in points, scooped up the ball and punted it again.
And to add insult to injury it was a 68-yard bomb of a pint that pinned the Rams at their own 11.
We feel bad for Jamir Jones who was just signed by the Rams ten days ago and he was active for the first time Thursday Night.
Had it stood it would have been the Rams first punt blocked since Cory Littleton in 2018 (he blocked two that season). But it would have been special for the young man to block one in his first Rams game—especially where he actually did it.
The scoring is odd since it was a block, a free ball picked up and then punted but the scoring is one punt for 68 yards.
We get it, there can be only one "official" punt per play, just like there can only be one sack on a play. But we've seen a few situations where a defender forces a fumble, it bounced back to the QB and that quarterback runs it for a gain. That is scored as a run, not a sack, a forced fumble a fumble recovery and then fumble recovery yardage which is what it is.
In this case, it seems like it should be a punt blocked, a recovery then another punt. But, alas, it is not.
It would be doubly odd if Jones blocks another one. That would have put him on the list for the most in a season by a Ram. But, officially, the next one will be his first.Another oddity we will bring up now is when a defender rushes a punter and he tackles him for a loss. Essentially it is the same as a blocked punt—the ball turns over behind the line of scrimmage but the player doing it gets credit for a tackle for a loss but no de facto punt block.
In 1967 Tony Guillory blocked two punts and also forced a punter to flush but tackled him before he could punt it. So, he does not get credit for three punts blocked, but really, it was three impactful plays, not two.
So, a new rule robbed Jones of his block but he will get his "points" by the special teams coach so his teammates will know he did the ob but the rules are the rules and once in a while guys get robbed of stats here than there.
It happened here. And it was esoteric, that is for sure.
Posted by John Turney at 10:39 PM