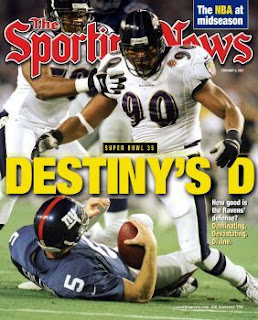 Rob Burnett fell to the fifth round in the 1990 NFL draft due to a disappointing senior season. As a sophomore he was dynamite. That year, 1987, he totaled 43 tackles and 11 sacks (including 4 on Halloween against Pitt) and honorable mention All-American honors and was Second-team All-Conference. Greatness was said to follow.
In 1988 Burnett recorded 63 tackles and 5.5 sacks and those numbers would again earn him honorable mention All-American honors and he was voted First-team All-Conference as well. Then, in 1989, he had that disappointing senior season, he had just 1.5 sacks but made 40 tackles. In his freshman year in 1986, he played in eleven games but recorded no statistics.
Burnett would finish his Syracuse career with 146 tackles (which ranks 10th all-time at Syracuse), and 18 sacks (which still ranks ninth on the school's all-time list). In addition, he was named a member of the Syracuse All-Century team. 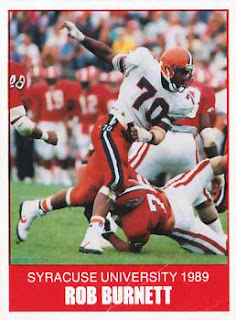 Looking back Burnett, was 6-3½, 245-250 pounds, and ran about a 4.9 forty pounds but said he was resting on his laurels later in his collegiate career. He did his duty, did his workouts, lifted weights but was not serious about it, and did not hit it hard. He grew, got somewhat stronger but not as he could have and his play leveled off.
So, rather than being a second-round pick in the draft, as he figured he was a mid-rounder. Some of it was unfounded rumors Burnett thought, coaches who had benched him for a few games talking to scouts that also caused the drop.
Burnett didn't light the NFL on fire as a rookie but he and fellow rookie Anthony Pleasant (a third-round pick) ended the seasons as starters but were just okay, but showing improvement 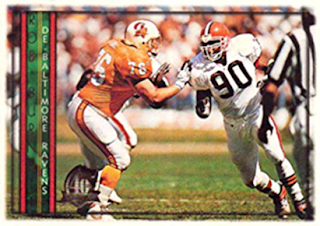 The Bud Carson (Browns head coach) defensive scheme was an up-the-field 4-3 where the linemen played the run on the way to the quarterback—the kind of scheme the Steelers and Rams enjoyed when he ran their defenses in the 1970s and early 1980s. It was fun for ends like Pleasant and Burnett to play that way just "pin their ears back and go". Had there been more success that year Burnett may have had an entirely different career in the NFL.
It was in 1991 Burnett became truly committed to football—that he learned to truly love it and it was Bill Belichick that ignited that fire.
Belichick had been hired by the Browns and he ran a tough football camp. "He put us through a training camp that was like no others I have ever seen". It made me ask how much I wanted to play football, how much I wanted to sacrifice to play for the Browns. You want to talk physical, that was physical".
Belichick was famous for a 3-4 defense the Giants used that brought two Super Bowl wins to New York but with the Browns, he used a 4-3 but it kept many of the same principles of the 3-4 scheme. "He still wanted pressure but he wanted his defensive lineman to play the run and play smart—it was a real adjustment".
In his mind, Burnett wondered if he would even make the 1991 Browns roster. Nick Saban, the Browns defensive coordinator said, "I don't know if he was in danger of not making the team but there was a question of whether or not he was the kind of player we could win with in our scheme. Rob has always had some ability but had some difficulty in our scheme when we first started because he was a one-gap type of player, both he and Anthony (Pleasant).
Burnett had to also hit the weights, gain some weight, get stronger, getting up to 280 or so pounds. After that work was done Saban said, "Now they are not one-dimensional guys—they can play with power to dome degree and that helps them with the pass rush because the tackles have to set on them a little differently".
In 1992 and 1993 the Belichick/Saban-coached Browns defense improved (third-fewest rushing touchdowns, sixth-fewest rushing yards, the fifth-lowest yards per rush while also the third-most sacks and Burnett had 9.0 sacks both seasons.
In 1993 he was an end in the base defense but with the development of rookie Dan Footman playing more and more Burnett began playing left tackle in nickel, something that would be a theme going forward in his career, and Footman would play left end.
By 1994 he was a Pro Bowl alternate and replaced Bruce Smith in the game. He was also named All-Pro by Rick Gosselin of the Dallas Morning News who wrote, "Burnett was the dominating player on the NFL's stingiest defense (league-low 204 points allowed). He had a team-leading 10 sacks and led Cleveland's down linemen in tackles."
Though generally a power player, Burnett had good quickness and
could swim a blocker and make a tackle in the backfield
The '94 Browns made the playoffs that season and the defense was on par with 1992-93 in terms of the "numbers". But, in 1995 the Browns announced they were moving to Baltimore and the wheels came off the club.
Later Burnett recounted that "Fans were going nuts. Sponsored pulled out of the stadium. They blacked out signs. They booed us. We got death threats. Everything possible that could possibly distract a team was done." A 1994 playoff team went 5-11 in 1995 and they were off to Baltimore. 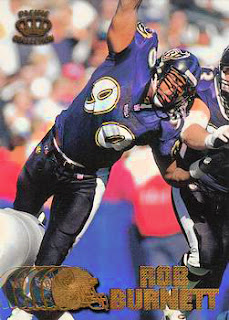 Burnett suffered a setback in 1996 with a knee injury and missed ten games but he returned in 1997 and under Marvin Lewis, the Raven defense got better and better every year and Burnett was the cornerstone on the line playing in front of Ray Lewis and opposite Mike McCrary and next to excellent run-stuffing tackles.
Marvin Lewis was very creative as the Raven coordinator, using all sorts of the popular schemes and gimmicks of the time. You could see Burnett dropping into coverage when the Ravens would zone blitz. When the Ravens used the Bear front of the 46 defense Burnett would play over the nose and in nickel, he'd usually play the right three-technique with Peter Boulware the Sam 'backer played left defensive end in Burnett's spot. Also, when the Ravens used a 33 nickel Burnett was again be the zero technique.
Clearly, Lewis thought Burnett was a mismatch for NFL centers in the 46/Bear and 33 nickel packages. In many ways, Burnett was playing the "Dan Hampton role" in the Raven defense in 1997-99 that Hampton did in 1985-87 forth Chicago Bears.
In 2000 when free-agent defensive tackle Sam Adams was signed he's play the zero-tech in the 46/Bear and Burnett's rule changed a bit. He would play the left three-tech in that front and also in the nickel with, again, Blouware as the left defensive end.
Six years after Gosselin named Burnett All-Pro, Sports Illustrated's Paul Zimmerman picked Burnett for his personal team, writing this, "Here's what Burnett means to the Ravens: He's the only member of their front four who can rush the passer and still stand firm at the point. Which allows the tackles, Tony Siragusa and Sam Adams, to slant away from Burnett and toward Michael McCrary, freeing him to rush upfield, a skill at which he excels. It's a terrific scheme, and Burnett, who never takes a play off and can put on a serious pass rush of his own, is the guy who makes it go."
In addition to Zimmerman, Peter King (also Sports Illustrated) and Gordon Forbes (USA Today), Dave Goldberg (AP), and Mike Sando (Tacoma News Tribune) named him to their personal All-Pro teams, and those made up more than half the votes he got for the AP All-Pro team, and it was enough for him to make Second-team.
That year the Ravens had one of the best defenses in NFL history and won the Super Bowl simply crushing NFL-caliber offenses every week and allowing just 165 points, 970 yards rushing, a 2.7 yards per rush average, five rushing touchdowns, and took the ball away 49 times—all tops in the NFL that season.
It was the middle season of a three-year run that was one of the top run-stopping teams of all-time—from 1999-01 the Ravens allowed just 75.3 rushing yards a game and 21 rushing touchdowns and a 3,1 yards per carry average—all NFL bests and also they allowed an NFL-fewest 707 points over that three-year span. 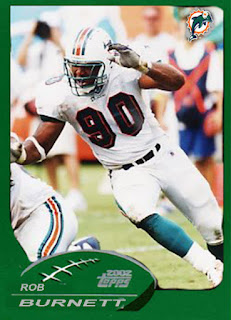 After the 2001 season Burnett, along with several Ravens was a cap casualty. He was making a lot of money and getting long in the tooth. The Ravens had to reload and could play 35-year old defensive linemen a ton of cash. So, in the off-season, he signed with the Dolphins after seriously considered signing with the Patriots but the money was better in South Florida since they offered a two-year $2 million with some incentives and it was reported that the Patriots were offering a one-year deal around the veteran minimum which was around $750,000 at the time.
Burnett spoke of his closeness to Belichick and what that relationship meant to Burnett's career but it was a matter of making the best business decision at that point. When the Dolphins played the Patriots in October that season Burnett told the media "I have nothing but love for Bill. If I hadn't have come here I'd be there right now".
Sidebar—
Anthony Pleasant, Burnett's partner in crime at defensive end in Cleveland did play for Belichick again. In New York in 1998-99 and with the Patriots in 2001-03 so had Burnett chosen the Patriots they would have been reunited with the coach who changed their style of play and making them more valuable than they might have otherwise.
Sidebar over
With the Dolphins Burnett was a nickel rusher for the two seasons he was there. The Dolphins had Jason Taylor and Adewale Ogunleye at the ends and two very large tackles in their base four-man line—Tim Bowens and Larry Chester who were both listed at 325 and were great run stuffers, but could not rush the passer a lick. So, Burnett would play left tackle and Jay Williams would play right tackle in between Taylor and Ogunleye in likely passing situations.
Burnett, in his prime, a 6-3 280-pound strongman would be a player today in a system that had some two-gapping or gap-and-half in it. No team plays pure two-gap all the time anymore, but there are still some elements of it that remain. Burnett's strength would always be an asset in a system that utilized those elements and he had did have good quickness, he was more than just a power guy.
He wouldn't have the speed to excel on the edge in passing situations but as an inside rusher, he'd do very well in our view.  We think his role would be similar to that of a Justin Smith when he was a 49er or a Calais Campbell when he was a Jaguar—NOT as a body-type comparison but as a role comparable. Another comparable might be Trey Flowers excelled in Belichick's system in New England and who got paid big-time by the Lions in 2019, but, we might suggest that Burnett would be superior to Flowers in terms of strength and pass-rush skills.
After his career Burnett was a businessman, getting into car dealerships, nightclubs, and as well as other commercial real estate ventures, and is very successful in those fields. He also tried his hand as a Ravens radio commentator for WBAL-AM for the 2006-2009 seasons.
Burnett was a tough guy, a strong guy with enough quicks to be a good edge rusher but his ability to sink to three-technique and even nose-up on a center in Marvin Lewis' version of the 46/Bear made him special. Additionally, he was a great kick blocker—knocking down five field goals and three PATs in his career to make our list as one of the better players at that in league history so he had value in special teams as well.
Rob Burnett—one tough dude.
Career stats— 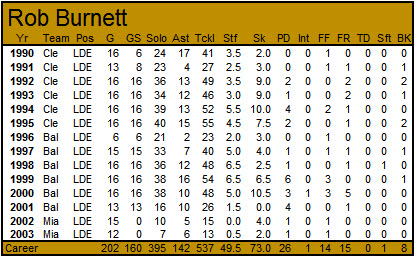