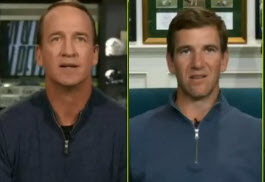 One can learn a lot watching Monday Night Football With Peyton and Eli. One can hear a lot, too.
Part of that ESPN2 Boradcasr is Peyton and Eli having guests join the Manning brothers. Tonight the first-quarter guest was Marshawn Lynch and Tom Brady was the second-quarter guest.
In both segments, there was an odd play at the snap. In the second quarter a snap ended up on the ground and Jameis Winston picked up the ball and threw it to Alvin Kamara for a touchdown.
When the ball was on the ground Brady uttered "Uh-oh".
Brady on the dropped snap by Winston
Credit: ESPN2
In the first quarter, there was a player where Geno Smith had to basically eat the ball and Lynch uttered something stronger than "Uh-oh"—
Lynch on the aborted play by Geno Smith
Credit: ESPN2
Posted by John Turney at 7:10 PM