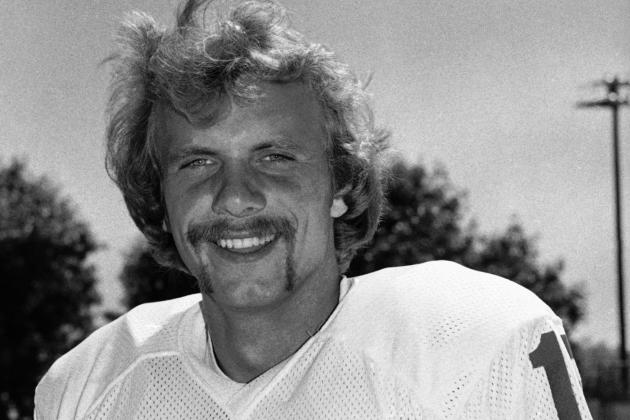 Tomorrow, on June 11th, Joe Montana will celebrate his 60 . It seems like yesterday Joe Cool was drafted in the third round of the 1979 NFL Draft, 82 , out of Notre Dame.

That year Bill Walsh was hired to rebuild a dysfunctional franchise. The 49ers were coming off an embarrassing 2-14 season where they had two head coaches and were outscored 350-219. Walsh made Montana his prized quarterback project for the future. Heading into the 1979 season he had Steve DeBerg as his starting quarterback and the third-year pro from San Jose State would be the bridge guy until Montana was ready to play.

In 1979 Montana mostly sat on the bench while watching DeBerg set 49ers team records in attempts (578), completions (347), and passing yards (3,652). All those passing records did not translate into wins as Walsh’s first season in San Francisco yielded an identical 2-14 record.

But Walsh was building for the future. He would remake the roster and eventually West Coast Offense to Montana after trading away DeBerg following the 1980 season.

Heading into the week 12 game against the Denver Broncos starting quarterback Steve DeBerg had thrown 407 passes, completed 244 for 2,593 yards for 12 touchdowns and 17 interceptions. He was completing 59.9 percent of his passes and having a career year. The only bad thing was that the 49ers were 1-10. Walsh knew he was calling too many passing plays and DeBerg’s consistent turnovers was leading him to try and get Montana some much needed experience. Going against the tough Broncos defense, led by linebackers Randy Gradishar and Tom Jackson, was not the game to do it.

The Broncos, coached by Red Miller, had a record of 8-3 heading into the game and were just two years removed from being in the Super Bowl. On paper this was a miss-match. In the end it was a Broncos the game did see history for Joe Montana and the 49ers- by the most unlikeliest player in franchise history.

Bob Bruer was an All-Conference wide receiver-tight end at Mankato State University in Minnesota. At 6 feet 5 inches and 235 pounds Bruer was looked at by coaches and scouts as an intriguing tight end prospect hands. He was drafted in the 9 (pick number 221 overall) in the 1975 Draft by the Houston Oilers, but was cut during training camp. The following year he spent time at camp with the Dallas Cowboys, but again failed to make the team.

In 1977 Bruer decided to give the CFL a chance. He played the next two seasons with the Saskatchewan Roughriders. In 1978 he caught 34 passes for 491 yards and two touchdowns.

This production, and his unique size, caught the eye of 49ers first year head coach Bill Walsh who signed the CFL stand-out. Walsh brought Bruer in to compete for a back-up tight end role next to 1978 first round pick Ken MacAfee. After the pre-season was finished Walsh decided to keep Bruer as the team’s second tight end. Then he cut him so he could pick up defensive end Dwaine Board who was just released by the Pittsburgh Steelers. Board would go on to play ten years with the Niners, winning two Super Bowls.

Just one day after being waived Bruer was re-signed. He would play in all 16 games during the 1979 season, but it was the game against the Broncos where he made 49ers history and placed his name next to the great Joe Montana.

On November 18, 1979 the Broncos were heavy favorites over the 49ers at Candlestick Park. But in the first half the 49ers were the team making all the plays. In the first quarter the Broncos took a 3-0 lead. Then the Candlestick Faithful saw a barrage of points. Early in the second quarter Paul Hofer plowed over from the one-yard line to give the home team a 7-3 lead. The Broncos responded with a 11-play, 69-yard drive capped by a Craig Morton to Rick Upchurch 13-yard score. After the Broncos were called for off-sides on the kickoff, the ensuing kick was returned 85-yards for a touchdown by 49ers rookie halfback James Owens (who was drafted in the 2 round ahead of Montana) to give the 49ers a 14-10 lead.

After forcing two Broncos punts the 49ers continued their stellar play as DeBerg guided the 49ers offense to another score capped by Wilbur Jackson’s 15-yard touchdown run. With just over a minute left in the half it looked like the 49ers would go into the locker room with a big lead. But these were the lowly 49ers who hadn’t found out how to win yet. Right before the half Morton completed four passes (big play a 30-yard pass to Upchurch) including the final 12 yards to Otis Armstrong as Denver only trailed 21-17 at the half.

The second half was dominated by the Broncos. In back-to-back drives to start the third quarter Morton drove his team to two touchdowns. The 49ers appeared to respond after the second touchdown as the Broncos helped the cause by fumbling away a punt return- as Upchurch muffed the catch at his own 28-yard line. Walsh’s offense then had a first-and-goal at the 8-yard line. Halfback Paul Hofer tried a run off left tackle but was hit by Broncos defensive tackle Don Latimer who punched the ball out. Broncos linebacker Bob Swenson dove on the ball. Since no 49ers player touched him Swenson got up and rumbled 88-yards untouched for a touchdown. Ball game over.

The Broncos had turned a 21-10 deficit with just over a minute remaining in the second quarter to a 38-21 lead heading into the 4 quarter.

In the 4 quarter DeBerg threw 13 passes on one drive, but to no avail, as the Niners turned the ball over on downs at the Broncos 5-yard line. Backed-up the Broncos punted to 49ers safety Dwight Hicks who returned the punt five yards to the Broncos 30-yard line. A good starting spot for a rookie quarterback to see some action. With 2:47 left in the game Walsh sent in Montana. At this time Montana had only played quarterback in two games and threw only two passes. In week three against the Rams he completed his only toss for 8 yards. In week 8 against the Falcons he completed his only pass for negative 8 yards.

On the drive Montana ran five plays. All five were passes. His first three attempts were:

Now came the magic moment. On first down and ten from the Broncos sixteen yard line the 49ers lined up in a split backfield with two wide receivers and tight end Bob Bruer in tight on the right side. Montana took the snap from his center Fred Quillan and took a 5-step drop. With prefect pass protection he looked left first, then peak right and fired a dart over the middle into the end zone. The pass looked to be too high. But not for the 6-foot-5 Bruer who put his right hand up as high as he could to grab the ball with one hand. He then brought the ball into his body in the end zone for a touchdown. Playing in zone coverage Broncos defensive back Louie Wright was too late in getting over to cover the big tight end as he ran a route down the middle of the field behind the linebackers.

After the game Bill Walsh didn’t have much positive things to talk about- except for his quarterback of the future. “Joe Montana was a bright spot, “said Walsh to the media even though Montana only played five plays.

Aftermath for Montana and Bruer

Montana would go on to throw 318 career touchdowns (273 in regular season; 45 in post-season)- with 283 of those as a Niners quarterback (35 total with the Chiefs).

Bob Bruer would return to the 49ers in 1980 but played in only one game before being released by Walsh. He was quickly picked up by his hometown team, the Minnesota Vikings, as he replaced veteran Stu Voigt. Bruer would go on to play four seasons with the Vikings scoring 7 more touchdowns. 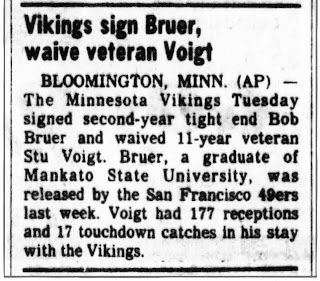 As we celebrate the birthday of Joe Montana, we can also praise Bob Bruer. Although he played in only 17 career games with the 49ers he goes down in history as the player who caught Joe Montana's first career NFL touchdown.