STATS YOU NEED TO KNOW
By John Turney
When a quarterback is sacked at the line of scrimmage it counts as a sack, it's a sack for zero yards. Traditionally, tackles behind the line of scrimmage are a key stat as well. NFLGSIS calls them "tackles for loss". Stats, LLC., call them "stuffs". We at Pro Football Journal add in stuffs on pass plays, for example when a screen pass is dropped for a loss.

But, there is no real consistency in plays for losses since sacks count of they are not for a loss. In this excercise, we've counted all the tackles that result in no gain or less, whether a pass play or a run play and we include sacks. We count solo and assisted tackles the same since we don't desire to break out and analyze a few thousand plays and feel it makes a good apples-to-apples comparison list. It is the reason the sack totals may differ from official totals slightly, the "search criteria" was different than usual. Perhaps at the end of the season we will take the time to make the list more prefect.

We think it shows the players that are making plays that are considered by coaches a big play, one for no gain or less. We began with 2011, J.J. Watt's rookie season and totaled the plays that fit the criteria with a big assist from Pro Football Reference.com.

You'll see we have sorted the list per 16 games, to make up for players who may have missed a year or have retired such as Jared Allen and others. 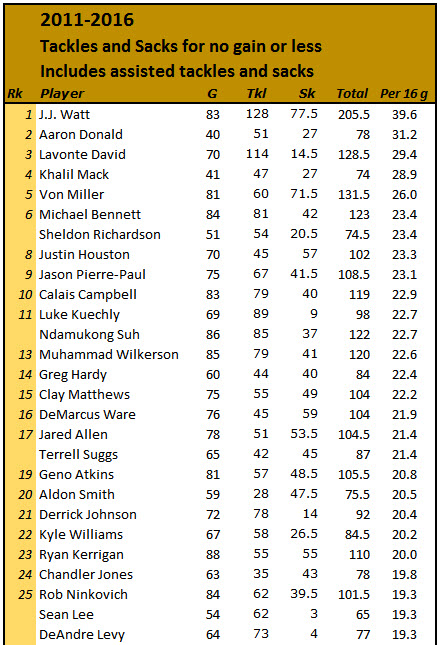 Behind Watt in total number of plays made are Von Miller (131.5) and Lavonte David (128.5). Aaron Donald and Khalil Mack have only played 2½ seasons but their per 16-game average are both in the top five. They certainly have both lived up or, or even surpassed their expectations.
Posted by John Turney at 4:52 PM