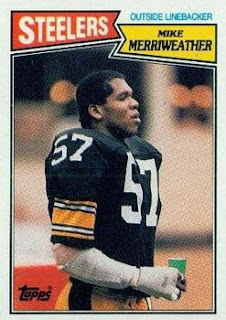 Steeler and Viking outside linebacker Mike Merriweather, is we think, one of the more underrated players of his era. He garnered post-season honors from 1984-87 then he sat out a season due to a contract dispute, then was traded by the Steelers for a First-round pick and had a few fine seasons with the Vikings, gaining Second-team All-Pro status from College & Pro Football Newsweekly in 1990.

He was more than just a rushbacker, he dropped in coverage and was adept at knocking down and picking off passes and ran four of them back for touchdowns. 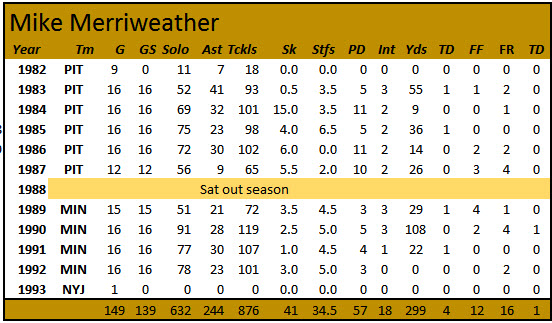 Tackles and assists and other stats in the above chart come from NFL Gamebooks and differ from the seasons the Browns used stats based on coaches' tape review. We try and keep our charts with an apples-to-apples comparison when possible.