Which Offensive Tackles are Hall of Fame Worthy?

Recently, the Talk of Fame Network has been interviewing and writing posts on Hall of Fame candidates who are worthy in many ways but yet to be in the discussion by making the Final 15 list or even the Final 25 semi-finalist list.

We decided to put up some numbers of the Hall of Fame tackles and compare them to those who are waiting for their chance to perhaps be inducted.

Ron Mix atop the there should be an explanation. It until 1967 or so that combined All-AFL-NFL teams were selected, so many of Mix's selections are All-AFLs. In most of his wasn't competing with Rosey Brown or Forrest Gregg for an All-Pro slot. But, it is also very likely his numbers would have been excellent regardless of how All-Pro, All-AFL, and All-NFL teams were selected. The 1960s are an where historians need to be accurate in to be neither biased against the AFL or for it. In this case we just listed his we are not suggesting he's the best offensive tackle of All-time by atop this list, just that he was honored many times. Maybe he was the best, but numbers alone wouldn't make that determination in our view. 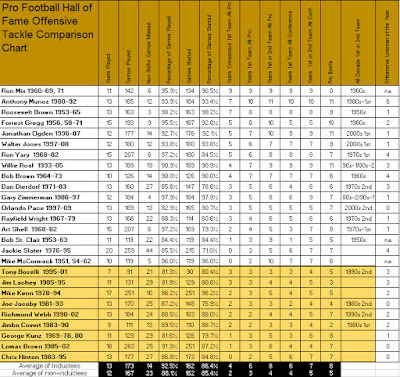 Note: Jim Parker split his career between tackle and guard, we put him with guards. He was a guard on the NFL 75th Anniversary team, so we let him there, though he could also be on this list as it is a close call.
The final category is one we think should be included in any analysis for linemen and it's the Offensive Lineman of the Year Awards. From the mid-1960s through the mid-2000s there were several groups, including the NFLPA and the NFL Alumni and a couple of others selected, through a vote of players, former players or writers who the best offensive linemen in the league or conference was, regardless of position. Anthony Munoz won one of those awards in six different seasons and we think these awards, along with the consensus All-Pro selections and other factors shed light on players and who may be a cut above, a group of great players.

Tony Boselli had career-ending injuries and as a result, ranks very low in the longevity part of this table. However, he was a consensus All-Pro three times and was an NFL/AFC Lineman of the Year those same three seasons.

Mike Kenn ranks highest in the longevity portion and in the All-pro portion. His Pro Bowltotal is five, but in one of those oddities that sometimes occur, in 1991 he was a consensus All-Pro but was only a first alternate to the Pro Bowl, so his Pro Bowl number would be higher if not for that.

George Kunz, Lomas Brown and Chris Hinton ranked high in Pro Bowls but were not and only Kunz was ever a Conference Offensive Lineman of the Year.

We do not envy the position the Hall of Fame voters are in, they have piles of excellent players and when they are compared to those in the Hall they see that sometimes the separation between those in and some of those out is very small.

This chart it shows that the average HOF tackle played 13 years and started 86% of the games they could have in their career. The averaged four consensus All-Pros and six First-team All-Pro selections to go with an average of 8 Pro Bowls. Those not in do have lower numbers, albeit it's a matter of opinion how great the separations.

We fully understand there is more to selecting Hall of Famer than numbers, there are , the "what they said" type of things where opposing defensive ends may have a comment about who was the toughest they faces, there is team success, the "rings" and other things, but this, we feel gives some perspective for the votes and fans.

We welcome your comments.
Posted by John Turney at 6:52 PM