STATS YOU NEED TO KNOW
By Nick Webster 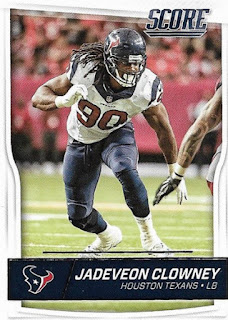 Jadeveon Clowney has arrived. Clowney has been playing well against the run all year and it shows as he’s second in the league in stuffs, tackles of runners or receivers behind the line-of-scrimmage. Remember, his signature play in college was not a sack, it was blowing up a running play in the backfield, we’re starting to see that Jadeveon Clowney emerge this year. The prospect of 2017 with a healthy J.J. Watt, Jadeveon on the upswing and Whitney Marcellus able to take advantage when an offenses's focus is elsewhere should have Texans fans relishing next season. 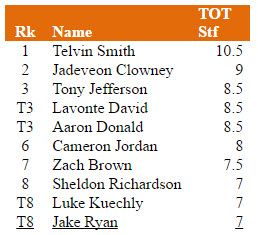 Lavonte David has returned to where he belongs. Under the radar in Tampa, David has been spectacular at making plays in the backfield in his still young career.  In 2012 through 2014 he was 2nd, 1st and 1st in the NFL in Stuffs. But last year, after signing a big contract in the offseason, he finished tied for 42nd in the league with just 7 sStuffs.  However, it appears David is back, already exceeding last season’s figure with 8.5 so far tied for 3rd in the league – welcome back Lavonte.

And, of course, the incomparable Aaron Donald is also tied for third.  Toiling through a difficult season in LA as they manage their relocation and breaking in a new QB, Donald continues to show he’s the best interior Lineman in the NFL.

Luke Kuechley was having another fine season – it remains to be seen what will happen to Luke as he heals from the concussion he suffered a few weeks ago, we wish Luke well, he’s a great one, and appearing on this list even after missing time for injury supports that. 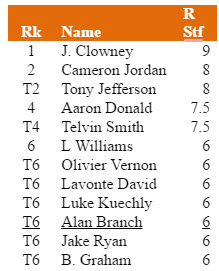 On running plays – Clowney leads the league and receiver hawkers Telvin Smith and Lavonte David begin to drop down the list. 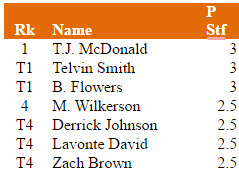 On passing plays, you can see part of what supports Telvin Smith’s overall stuff lead. The speedy undersized LB is excellent at tracking receivers and taking them down in the backfield. Lavonte also shows up here, the trend to speedy small LB’s and box safeties has placed many players on this type of list in the last couple of years – Mark Barron (box safety) dropping out this year in favor of Telvin Smith. Many defenders are tied with two pass stuffs.

This year 16% of stuffs have been on passing plays, actually down from the 18 to 19% rate we’ve seen over the past few seasons – but still up versus longer historical trends.