Jared Goff: You're Up, Kid 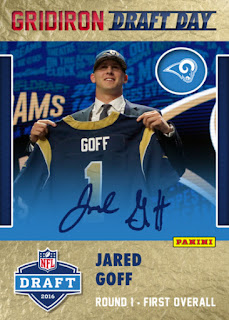 Like spiking the ball and sack dances, Los Angeles Rams quarterback controversies are part of the American football culture. As long as most Rams fans can remember the most popular quarterback in town is the one backing up the starter. 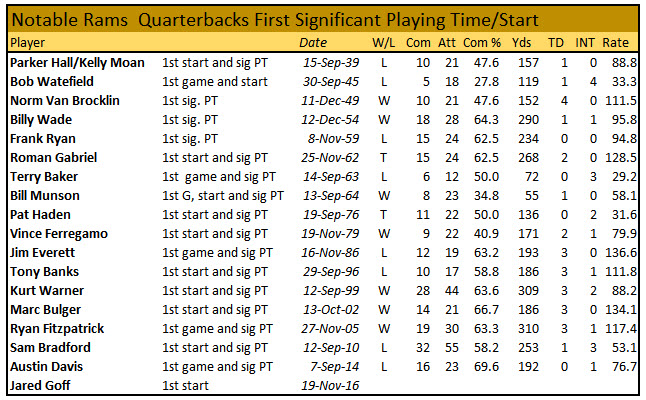 For Hall it was the single-wing era and he started his first game at halfback. We know he didn't throw the touchdown pass in the game, Kelly Moan did. Articles about that game don't give details of the passers, but we know Johnny Drake had a good game. Hall played well his rookie year, in fact he ended up breaking some of Sammy Baugh's passing records and was voted the official NFL MVP for 1939.

We are making an assumption about Waterfield in 1945. He is given credit for the passing statistics and we are reasonable sure he played the whole game, but until we see a play-by-play we are leaving ourselves a little wiggle room. Waterfield likely threw all 4 INTs in the game, but he recovered in that season was won the NFL Championship and was the official NFL MVP that season.

Norm Van Brocklin's first start was in 1950, but in the final game of 1949 he came into the game early and tore apart the Redskin secondary for 4 TD passes. Since he came into the game so early we are calling it his first significant playing time. In general, we called that 15 passes attempted.

Billy Wade started the week before the entry you see here, but he only threw two passes in his first start, so we are going with when he attempted his significant amount of passes. That is the case for Ryan Fitzpatrick, Frank Ryan and the others noted.

Haden had WFL experience so he wasn't necessarily a typical inexperienced rookie, like most of these others, but we included him and Kurt Warner, who had experience in pro football, but little NFL playing time.