In 1976 Sport Magazine chose NFL Players of the Week, the only publication we know of that did so. They were announced on the weekly NFL Films show "Pro Football Playback" with the exception of week one.  The winners were given a small crystal award designed by Tiffany & Co in the shape of a rectangle embossed with "Sport MVP" on the base: 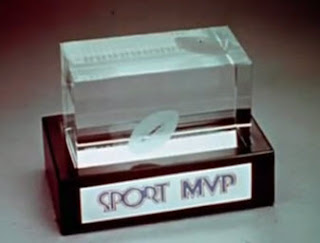