The Yucks: Two Years in Tampa with the Losingest Team in NFL History 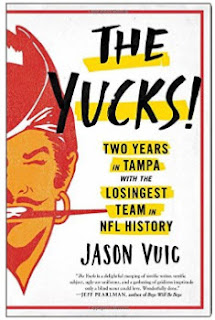 One of my favorite baseball books is Seasons in Hell: With Billy Martin, Whitey Herzog and "The Worst Baseball Team in History"—the 1973-1975 Texas Rangers. Why? Because sometimes when things are going wrong for a franchise it makes for a great read.

The same is true for Jason Vuic's new book  The Yucks: Two Years in Tampa with the Losingest Team in NFL History. It is a well-written volume documenting the twenty-six game losing streak the Buccaneers established in 1976 and 1977.

I enjoyed the read of this well-footnoted book and the anecdotes within. As a fan of those teams it gave some insight I didn't have about the foundation of the team and it's establishment. It has lots of quotes from players on that team and from the coach, John McKay. The team in 1976 had a talented defensive line composed of Council Rudolph, Lee Roy Selmon, Dave Pear and Pat Toomay and there are good stories about them and the power struggle between Steve Spurrier and McKay because of Spurrier's reluctance to throw to McKay's son, J.K. McKay.

The book chronicles the ten weeks of two-a-day practices (McKay quote "Football players don't like two-a-day practices, calisthenics or  coaches.  They like ice cream and dances"), the losing streak and the day-to-day struggles of the franchise.

As someone who has over a thousand volumes in his football book collection, this one ranks above most.
Posted by John Turney at 3:05 AM