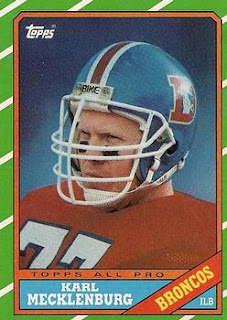 Broncos inside linebacker Karl Mecklenburg was a jack-of-all-trades in their front 7. He was a player than when he earned his starting job as an inside linebacker, he would often move and play outside and on passing downs would usually line up at right defensive end, but sometimes he'd play the left end or even inside.

Six times he received post-season honors and he went to six Pro Bowls, all in the same seasons he was All-Pro by various organizations.

He ended his career, in 1994, as a 4-3 middle linebacker, though by that time he came off the field on passing downs.  His career was certainly a unique one and he's been recognized as a Pro Football Hall of Fame semi-finalist (Top 25) five times. 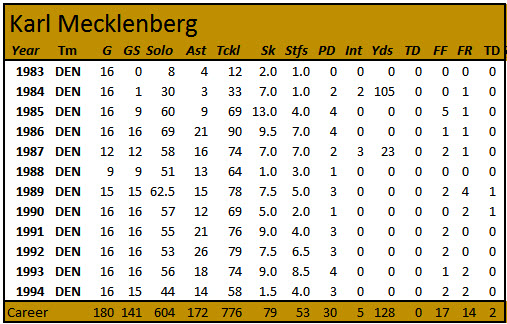 Tackles and assists and other stats in the above chart come from NFL Gamebooks and differ from the seasons the Broncos used stats based on coaches' tape review. We try and keep our charts with an apples-to-apples comparison when possible.