UPDATE: December 7, 2016. Miller was officially credited with the sack and forced fumble.

We don't have a screenshot of the original scoring from the Gamebook that credited  Jared Crick for the sack but that's how it was originally shown.

The Gamebook has been "corrected" to take credit away from Crick (which is proper) but does not give credit to  Von Miller, who made the play:

We know, Elias will say there is some protocol they are following, as they were when they shorted Robert Quinn a sack in 2014 but there is that compared to what actually happened, which is right there on film. They will probably stick with the ruling that it is a "team" sack.

Here are a couple of screenshots: 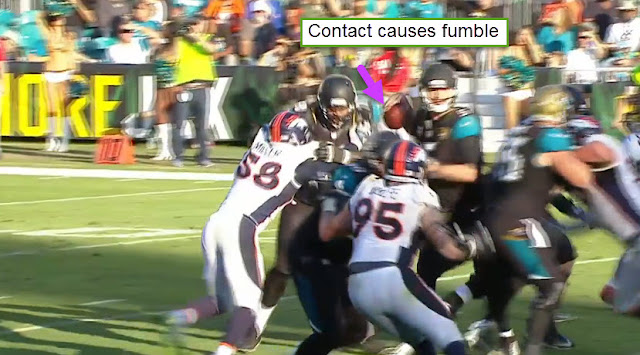 In the short term it does not matter, and likely not in long term, either, but sometimes rules on scoring are arbitrary. I doubt Elias will even give an explanation, but it would likely go like this "since the player never made contact with the ball, he didn't cause the fumble and cannot be given credit for the forced fumble and sack".

Miller is, in our view the top candidate for the NFL Defensive Player of the Year awards, followed by Khalil Mack and perhaps a couple of the Broncos defensive backs. His season won't be significantly enhanced if he were to get credit, but statistics are, in part, a way to track big plays. And this was a major play that mattered in the game.

So, it will now be one of "those things he does that does not show up in the scoresheet". That is fine, there are lots of those things in football, pressure interceptions, coverage sacks, etc., but if there is clear evidence a player caused a fumble then it should be scored that way.

That's just our view, scoring protocols should be subservient to the game and not vice-versa and in this case we think all of Newton's Laws of  apply. The ball was acted on by some force and that force was caused by Von Miller.
Posted by John Turney at 10:06 AM