Media is Finally Catching up to Johnny Hekker's Season 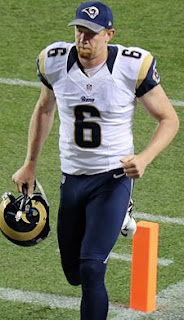 The L.A. Daily News and Deadspin have done features this week, and there have been a few others.

Yesterday, Hekker placed six punts inside the 20-yard line to bring his season total t0 46, tying the NFL record set in 2012 by Dave Zastudil, who reached the mark with the Cardinals in 2012. It was the fifth time he's had 5 or more in a game this season. Zastudil's mark was achieved in 112 punts, Hekker, 79.
But his season goes further than just the punts that ended up inside the 20, for starters he has 16 that have ended up inside the 11. Add to that the fact he only has one touchback which computes to a 46-1 inside-the-20 to touchback ratio (NFL average for 2016 is 5-1).

However, in 2013 the Rams played in a dome, ensuring at least eight games were in perfect conditions. This season he's playing outdoors, though Fall in Los Angeles does not compare to say, Buffalo, there is more to the elements than in the St. Louis dome.

The 2016 average for a punt (net) is 40.2 yards (the highest in NFL history) and Hekker is almost 6 yards above that. So, for 79 punts that amounts to over 450 yards of what Bill Parcells called "hidden yardage".

Add to all of the above he has a 75-, 76- and 78-yard punt to his credit this season and none went for a touchback, resulting in net-70 plus yards in each instance.

Add to all of that the fact that he's not had one blocked or had one returned for a score this season (he's only had one of each in his career thus far) showing he's not outkicking his coverage and is getting his punts off on time.

Bill Belichick is a coach who has noticed stating, "Hekker is a tremendous weapon. This guy looks like as good a player as I’ve ever seen at that position. He’s a tremendous weapon in his ability to punt the ball, punt it inside the 20, directional kick it, involved in fakes, can throw, can run, very athletic." Belichick added, "Hekker is a tremendous punter. He can change field positions" and "But I mean this guy, [Johnny Hekker], this guy is a weapon. I mean he’s not a good player; he’s a weapon."

Pretty effusive praise for a specialist. If Hekker were left-footed Belichick's head might explode.

Hekker has three games to add to his laurels, and with the Rams offense performing as it has he will have plenty of opportunities. We certainly hoped we have not jinxed him because one super-negative play (a block or a return for a touchdown) would certainly spoil what is, so far, the best punting season in the history of the NFL.
Posted by John Turney at 10:17 AM