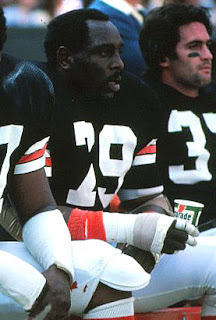 In 1976 Coy Bacon was traded from the San Diego Chargers to the Cincinnati Bengals for Charlie Joiner and it was a trade that worked out for both teams, at least for 1976 (and beyond for the Chargers).
Joiner had first for 1,000-yard season and averaged 21.1 yards on his 50 catches for San Deigo. Bacon had 21½ sacks in a 14-game season, of of the best seasons ever for any defensive linemen based on PFJ research.
Here are his game-by-game totals— 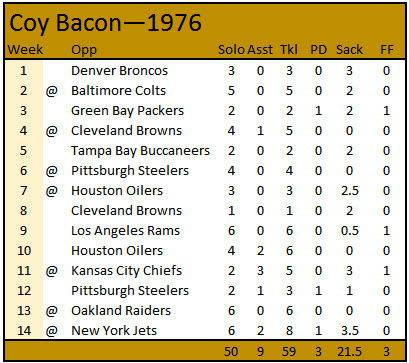 For his efforts, he was named to Paul Zimmerman's New York Post All-Pro team and was Second-team All-Pro on most of the major All-Pro teams as well.
Posted by John Turney at 12:07 PM