The Return of Golden Wheels? 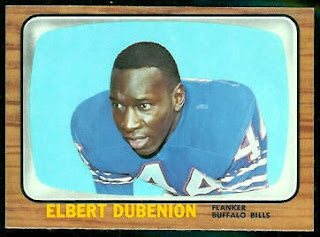 a new franchise with the AFL in the 1960's, along wlers in Houton and the Chargers in LA, then San Diego, the Buffalo Bills were one of the cornerstones of the burgeoning league  one of their most versatile was Elbert "Golden Wheels" Dubenion.

was a classic speedster but with a size unusual for of the day. In his 1964 season Dubenion on the AFL Champion Bills team averaged over 27 yards per catch, third highest in NFL history for a player with 2 or more receptions per game.  But in 1961 he something that has not been done in the 55 years since - he had at least one rushing attempt and one reception per game, AND averaged over 10 yards on each. Fifty-five years accomplishment might be equaled. 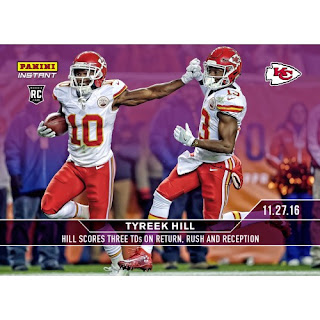 WR Tyreek Hill of the Kansas City Chiefs after a big game in NFL Week 15 he now has a rushing average of 12.0 yards per carry on 21 carries, so he already qualifies with more than 10 YPC and one attempt per scheduled game. Ironically, the out actually has fewer yards per reception than yards per carry on the season. He will need to up his 9.8 average yards per reception in the final week of the season to join Golden Wheels in the 10/10 club. Clearly a gamebreaker, though with a troubled past, Hill's skills combined with Andy Reid's offensive mind make the Chiefs a team to watch.
Posted by Nick W at 9:13 AM