The Los Angeles Rams traveled to Nashville and took on the Titans and also took away a victory and a NFC Western Division Crown. That is Donald's "Big Gift" this season.  The lump of coal is the official scorer took away a sack from Donald.

Yes, I know, there is something about no more miscellaneous yardage in the NFL anymore or some such thing but for all intents and purposed Donald sacked Marcus Mariota late in the Second Quarter but was given credit only for the forced fumble but not the sack.

It went down like this:  On nd and nine on the Rams 21-yard line dropped back to pass and before he could get the pass off to his running back Aaron Donald hit his arm and the ball flew a bit forward. There was a mini-scrum for the ball and eventually, Mariota picked up the ball and ran with it for three yards (to the Ram 19 yard-line) before being tacked.

Since the play took place in the final two minutes of the half Mariota was the only one who could legally advance the ball, which he did. However, since he was able to get it past the original line of scrimmage it was no longer a sack. Mariota was credited with a three-yard gain.

But here is the fumble recovery yardage for the game:

Here are stills of the sequence, all credit to NFL GamePass

Over the years I have had several discussions with Seymour Seywoff of Elias Sports Bureau about what is and isn't a sack. His main contention always was that there had to be an attempt to pass for a play for qualify for a sack. But what about a run? Shouldn't the same rules apply?

Mariota had no intent on a run play, he attempted to pass and was stripped of the ball. And by a chance recovery, he is credited with a run for three yards? Please. It was a sack and the yardage given to Mariota as rushing yards should be credited to him a fumble recovery yardage for the simple reason it was not a run, it was a fumble recovery.

Does THIS look like a rushing attempt? Picking a ball off of the turn then rolling and getting up for three yards? Again, it's fumble recovery yardage. 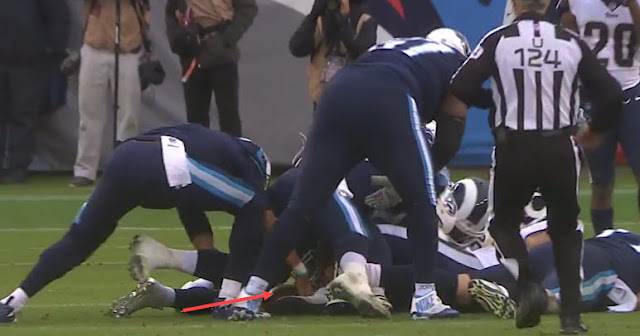 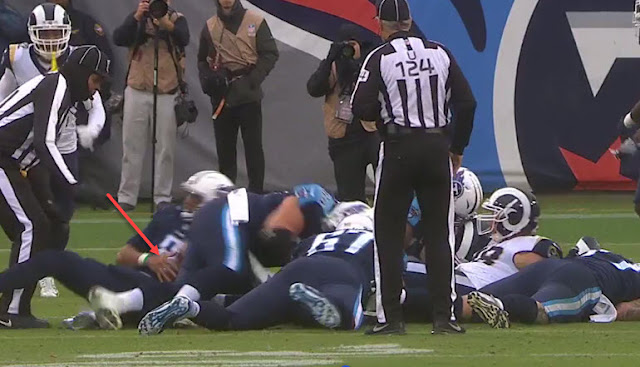 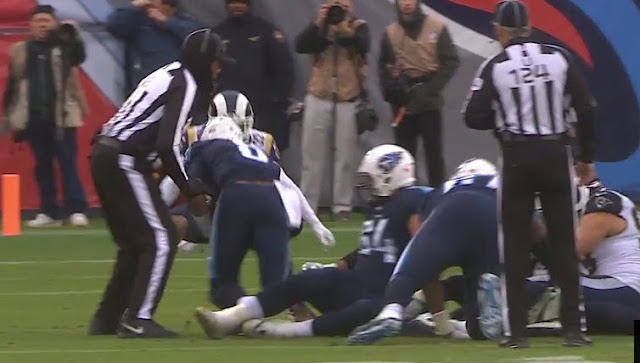 The Rams coaching staff can appeal to the NFL but they will likely lose, just like they did in 2014 but a fluke scoring by a fluke rule really cannot dissuade fair observers that Donald, a possible NFL Defensive Player of the Year by AP, PFWA, and SN, will be shorted one sack. It won't make tons of difference, but if Siwoff's policy for Elias all those years is "to be right" then this is a chance to get it right. It was a strip sack and a fumble recovery for three yards.
Posted by John Turney at 10:39 PM