Chesapeake Fog and a Miracle over Miami

Great Games of the 1970s
By Joe Zagorski 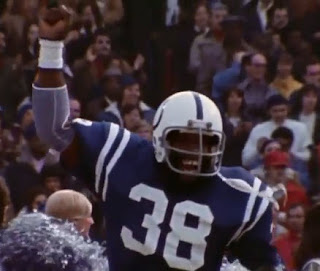 The Baltimore Colts began the decade of the 1970s in the greatest fashion that any team could hope for—by capturing the Vince Lombardi Trophy in Super Bowl V. The following year (1971), they managed to return to the playoffs as the wildcard entry in the American Football Conference. For the next three seasons, however, they had become good at only one thing, and that one thing was losing.  The Colts were in a series of transitions, make-overs, rebuildings, and annual visits to the blackboard during the 1972, 1973, and 1974 seasons. They accumulated the grand total of only 11 wins during those three years. Their fortunes appeared to look no better in 1975. They had a rookie head coach who had plenty of experience as an assistant coach in the NFL. But Ted Marchibroda was new to the fraternity of head coaches in the pro ranks, and for a team that had very little experience on their roster, his work was certainly cut out for him. 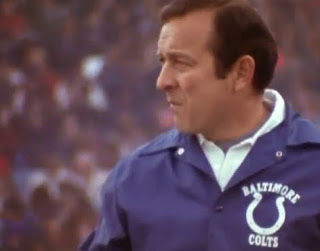 The 1975 Colts began the year in the fashion that most onlookers expected, losing four of their first five games. They appeared to be done. Stick a fork in them, packing it in, and dealing with another head-scratching off-season. Then out of nowhere, the Colts offense suddenly woke up, and the team scored six touchdowns in a 45-28 win at New York against the Jets. A miracle came into their huddle, and they became a completely different team from that point on. The Colts strung together eight straight wins, and their offense scored an average of 35 points per game from weeks six through 12.  The Colts were now poised on the precipice of winning the AFC Eastern Division crown.  But before they could earn the title of division champions, they had to knock off the defending division champs – the Miami Dolphins—on December 14th, 1975. 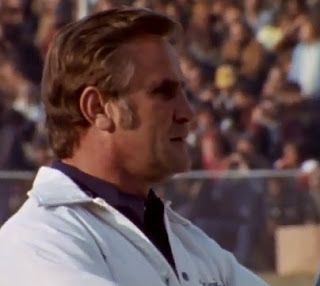 Miami had experienced more recent success than any other team in the NFL in the early 1970s. But in 1975, they were dealing with more injuries to key players than they had ever had to deal with before. Dolphins head coach Don Shula had to plug quite a few young and inexperienced players into his starting lineup when nine of his veteran starters on defense were lost for the season to various injuries. Nevertheless, Shula had his team vying for another division title by the 13th week of the season. A victory over the Colts on December 14th would give Miami their fifth straight division championship.

The Dolphins would definitely not be taking the Colts lightly. They had lost to the Colts in their earlier meeting on November 23rd at the Orange Bowl by a score of 33-17. In a game that was emblematic of Baltimore’s entire 1975 season, the Colts came from behind in the second half and dominated the Dolphins in that first contest. This rematch in Baltimore’s Memorial Stadium would give Miami a much-desired chance for revenge.

The Colts would certainly go into the make or break game versus the Dolphins with a healthier overall lineup on both sides of the ball. They had the momentum, and they had the home field advantage. Yet it was Miami’s defense which really outdid itself, especially when one considers how many of Coach Shula’s rookies and reserves were starters in this game. The No-Name Defense limited the explosive Colts offense to zero points through the first three quarters. Baltimore’s dynamic halfback Lydell Mitchell would once again earn a hero label in this game, but during the first three quarters, he was effectively stifled by the Dolphins defense. Colt quarterback Bert Jones was similarly stumped by the resilient pass rush from Miami’s front four, and by the determined and aggressive zone and man-to-man coverages from the Dolphins’ defensive backs. Jones—who was playing with injured ribs – would account for 206 net passing yards in this game, but he was having more difficulty than usual at putting points on the scoreboard. 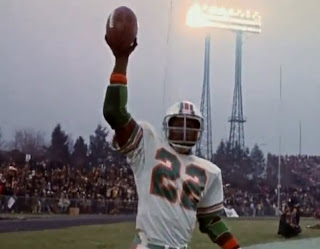 This defensive battle was scoreless at halftime. Then Miami, led by third-string quarterback Don Strock, mounted a scoring drive late in the third quarter.  A key third-down pass from Strock to punter and reserve wide receiver Larry Seiple gave the Dolphins a much needed first down deep in Baltimore territory. Miami tailback Mercury Morris then ran a sweep to his left, and beat the Colts’ cornerback Nelson Muncie to the flag for a touchdown.  If the Dolphins could hold onto their 7-0 lead for one more quarter, the AFC East title would be theirs once again.

But Baltimore head coach Ted Marchibroda knew that he had a key weapon on his side. He described his young team as such: “This is the most emotional, spirited pro team that I’ve ever seen,” Marchibroda claimed. “We have something everybody wants...enthusiasm.”

The Colts would display that enthusiasm on one particular offensive possession late in the fourth quarter. Starting from their own 14-yard line, the Baltimore never-say-die offense converted on several third downs. Bert Jones threw to setback Lydell Mitchell in the flat for 13 yards and a first down to ignite the drive. On the next play, Mitchell caught another Jones swing pass for 11 yards and another first down. Veteran Baltimore tight end Raymond Chester would catch two more passes as time wound down, placing the ball at the Miami 11-yard line. Two pitchouts to Mitchell resulted in the tying score. Mitchell plowed through Dolphin defenders Jake Scott and Jeris White from six yards out for the Colts’ first and only touchdown of the game. 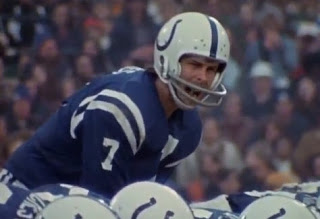 Neither team could score again during the remainder of the fourth quarter. The struggle went into overtime, where the first team to score would be declared the winner. Also making an appearance as the game delved into the early evening hours was a chilling fog off of nearby Chesapeake Bay. The visibility diminished to just a few yards downfield. Baltimore’s defense played strong once again, limiting the Dolphins to just one first down. Baltimore’s offense then put together another crucial drive. They once again converted on several third down situations.  Colts fullback Bill Olds ran up the middle for 11 yards and a first down. Then Bert Jones connected with Raymond Chester on a third-and-15 for another first down.  Two more key catches by Baltimore wide receiver Roger Carr placed the pigskin at the Miami 34-yard line. Colt running back Don McCauley then ran off right tackle for 13 yards.

All during these tense moments, it became increasingly obvious that this game would come down to a field goal attempt to provide the winning points. Miami placekicker Garo Yepremian had missed two field goals earlier in the contest, while his counterpart on the Baltimore sidelines, Toni Linhart, had failed to make one earlier field goal.  Linhart would now have a chance to redeem himself.  Just prior to his 31-yard attempt, Linhart tried to psyche himself up...in his own particular way. 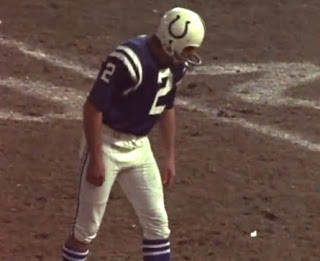 “I separated myself from the rest of the team and concentrated,” Linhart said. “I stretched a little bit.  You feel the pressure when you kick the ball. You hear the sound and you know if you kicked it good or not.”

The sound of the kick was definitely heard, but from the Baltimore sideline, the scene was difficult to view, thanks to the increasing amount of fog covering the field. “We could hardly see our kicker Toni Linhart lining up to kick the winning field goal,” recalled Colts linebacker Jim Cheyunski. “It (the kick) sounded real good,” said Linhart. “It was a beautiful kick.  It was a big thrill.”
Hundreds of Colts fans invaded the playing field as soon as the referees signaled that Linhart’s kick was good. Baltimore had with their clutch 10-7 victory over Miami taken a big step towards winning the AFC Eastern Division. Even in defeat, Miami head coach Don Shula had to admit that the better team won on this December day. “They (the Colts) deserved to win,” Shula said. “We didn’t take advantage of our opportunities.”

Baltimore head coach Ted Marchibroda beamed in the glow of victory, and happily lauded his players. “I’m very proud of our guys. They came back against the champions in the last quarter.  They never lost faith. This was a great football game. We beat a great Miami team.”  The Colts would go on to beat the New England Patriots the following week to claim exclusive ownership of the division championship.  But it was the victory in the fog over Miami that the players on that Colts team remember the most.

About the Author:
Joe Zagorski, a long time member of the Pro Football Researchers Association (PFRA), is also the author of the book The NFL in the 1970s: Pro Football's Most Important Decade, published by McFarland and Company, Inc., in 2016. It was ranked as one of the top ten football books in 2016 by The Library Journal.  He has written numerous pro football articles over the years for The Coffin Corner, the official newsletter of the PFRA. He was also a former sportswriter for The Coatesville Record (in Coatesville, Pennsylvania) and The Evening Phoenix Newspaper (in Phoenixville, Pennsylvania). In his free time, he does volunteer work on several charitable causes for the Tennessee Chapter of the NFL Alumni Association. He lives in Oak Ridge, Tennessee.
Posted by John Turney at 1:15 PM