WADE PHILLIPS: The Collapse of the Broncos 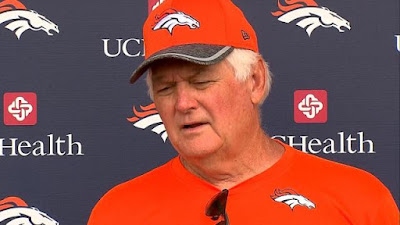 Usually, my stories here are subtitled "Looking Back" and concern men or teams from the past. Not so today, as the subject is two-fold: Wade Phillips and the team he left. Phillips learned his lessons well from the days with his dad through all the stops he made.

Most folks that truly dissect the game, and understand defense, would rank him as one of the top defensive coordinators of the past 25 years. The defensive passer rating is a tool to evaluate the efficiency of TEAM pass defense, and this tool has served me well over the years.

Let us take a look at the Broncos defensive passer ratings for 2015 & 2016. When the Broncos won it all in 2015 the rating when they won was 74.5 which of course was better than the league average, and when they lost it was 90.7. Last season Denver played even more efficient pass defense as the rating in victory was 62.0 and in loss 81.1.

Phillips is now in Los Angeles teaching his concepts to a hungry group of men who have all the traits of a playoff team and are ranked 5th so far this season in the defensive passer rating category. These are challenging, yet fun days for the boys in the helmets with horns. Not so in Denver. Much has been written concerning the quarterback position, and no doubt Mr. John Elway will address that situation in the offseason, but this short story is about team pass defense.

Denver not only is on an 8-game losing streak, they have plummeted in the rankings in trying to stop opposing quarterbacks. In the 3 wins this year the Broncos defensive passer rating is 80.4—about the league average, but in the 9 losses, it is a woeful 107.6! Blaming the quarterback when your secondary cannot stop ANY and ALL quarterbacks is a very narrow view.

Wade Phillips is sorely missed in Denver.
Posted by TJ Troup at 3:55 AM