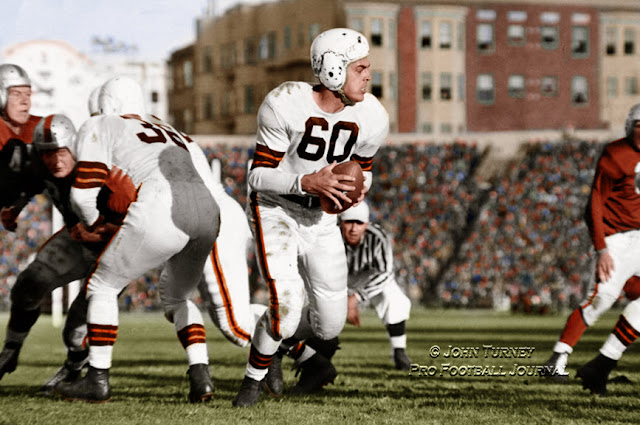 On this day (Dec. 6th) in 1921, Otto Graham was born in Waukegan, Illinois. Nicknamed “Automatic Otto” Graham played for the Cleveland Browns from 1946 to 1955. He won four All-America Football Conference (AAFC) titles and three NFL championships in 1950, 1954 and 1955. In his last game, the 1955 NFL title tilt against the Los Angeles Rams, Graham passed for 209 yards and 2 touchdowns and rushed for 2 more scores in a 38-14 victory. Graham guided the Browns to 10 division or league championships in ten seasons. In 1965 Graham was inducted into the Pro Football Hall of Fame.

Despite these great credentials Graham has only two books written about him. One authored by himself, while the other authored by his son. Here is a look at both books.
Otto Graham: T-Quarterback
Published in 1953 by Prentice-Hall publishers Otto Graham: T-Quarterback was written by Graham himself near the end of his career (maybe helped by a ghostwriter). It’s a 223-page look at how to play the quarterback position. The volume is broken down into 12 chapters.
Graham gives much detail and insight into playing the quarterback position and what it takes to be fundamentally sound. This book shows why Graham went on to a coaching career, eventually guiding the Washington Redskins for three years (1966-1968) finishing with an overall record of 17-22-3.
Also within T-Quarterback are 24-pages of photos with many images showing the reader how to play quarterback. Many geared towards beginning players, and even veteran players, T-Quarterback gives a very unique and insightful look at the Hall of Fame passer. 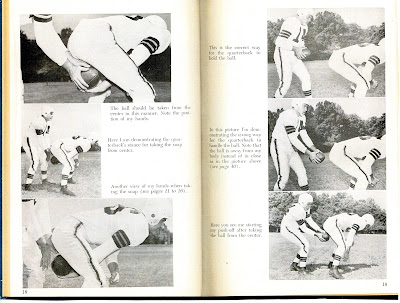 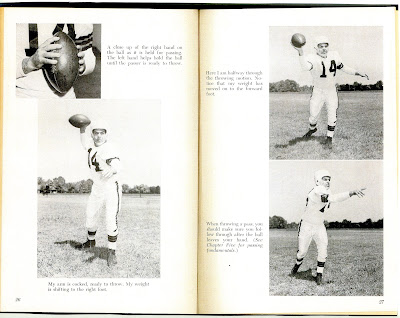 “The Graham book is a masterpiece for study by young footballers, coaches and those who teach the game. It deals with all the tricks of the trade from mental attitude to execution.” Book review from Salt Lake Desert News & Telegram.
Ottomatic: The Remarkable Story of Otto Graham 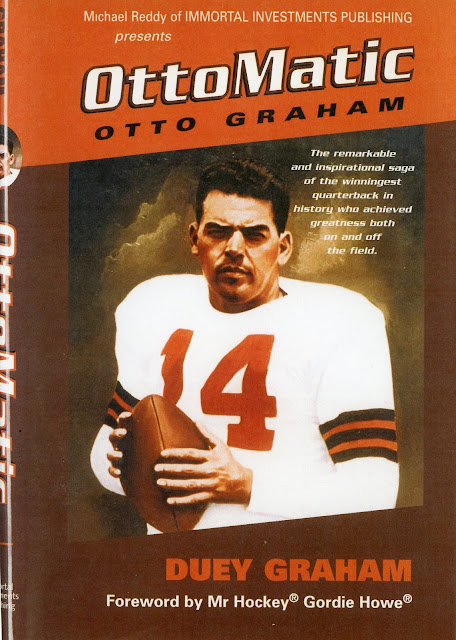 Published in 2004 by Immortal Investments Publishing, Ottomatic was written by Duey Graham, the son of Otto and Bev Graham. In this 252-page volume, Duey Graham writes a biography based on interviews with his father and his mother Bev Graham. Their voices and words carry the whole volume. Nine chapters long that cover Graham’s career from Waukegan High School; to Northwestern; his stint in the Navy; the Cleveland Browns in the All-America Football Conference; and his Browns years in the NFL. The last four chapters go into detail about his time coaching in the College All-Star game in Chicago; his career at the Coast Guard Academy; his time as head coach of the Washington Redskins; and the final chapter on his legacy (1970-2004).

One of the best parts of this book are the photos. Because of his access to family photos and material.

Over 100 images appear in the book with tons never before published, including Otto as a young boy; high school images; playing at Northwestern, in the service; and much more.
The book also features a Forward by hockey great and Otto’s good friend Gordie Howe.
On his birthday let's remember one of the NFL's all-time greatest quarterbacks.
Posted by cdw83 at 6:07 AM