"I Don't See How Kansas City Ever Loses A Game": The Significance of the Chiefs Defense in 1969

The above quote comes from the "Dancing Bear" Ron McDole after Buffalo lost to the Chiefs on December 7th, 1969. Reading online a story by Michael DiRocco of ESPN, he stated that the 2017 Jacksonville Jaguar defense could become the first team ever to lead the league in scoring defense, total defense, takeaways, and sacks. He mentioned previous great defenses, and that the Elias Sports Bureau stated no NFL team in the SB era had ever accomplished the above criteria.

ESPN is in the process of laying off folks, and Mr. DiRocco's inability to research might prove costly to his career. For ten years there was another league playing pro football, and though there were some putrid defensive teams there were also a handful of truly excellent defensive teams.

I learned from a college history professor years ago that being first is always SIGNIFICANT. That said—let's examine the best defensive team in AFL history and the only team that is truly significant in the SB era.

Kansas City allowed only 3,163 yards in total offense. Though very impressive, a detailed game-by- game breakdown in run defense tells us so much more about how dominant the Chiefs were. Only three times during the season did an opponent run the ball more than 30 times in a game—a rarity in this era of run dominant play calling. Two of the three were in the losses to the Silver & Black Raiders.

Now that we have the stats, shall we take a look at the personnel and scheme employed by the first second-place team to win a Super Bowl. Bart Starr exposed the three weak links in the Chiefs chain mail in January of 1967. Corners Willie Mitchell and Fred Williamson struggled the entire game, while middle linebacker Sherrill Headrick got his butt kicked by the Packer offensive lineman. Only Willie Mitchell was still on the Chiefs roster in 1969.

Aaron Brown had size (6-5, 255) and speed, and was very disappointed he did not start as a rookie in 1966 in the Super Bowl. Brown led the team with 14 sacks, and his month of November is one of the best in team history as he has great pass rushing games against Buffalo on November 2nd, and Denver on November 27th. He was an explosive, big-play lineman and does receive some All-AFL recognition. 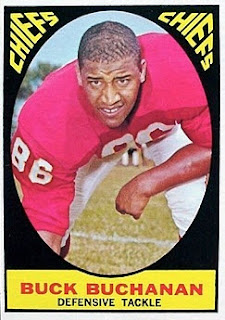 Buck Buchanan recorded 6½ sacks and was extremely difficult to move due to his size and strength. He was recognized as First-team All-AFL for the fourth year in a row 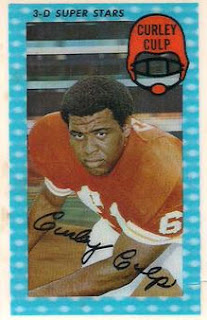 The trade with Denver for Curly Culp (for just a 4th rounder pick) gives Buchanan a running mate at tackle, as he is just as strong and even quicker than Buck. Culp records 8½ sacks (dominant performance against Buffalo in early November), and was learning how to shed blocks, and pursue. Culp ended the season with 69 tackles with nine coming behind the line of scrimmage.

Left defensive end Jerry Mays was not selected to the Western Conference All-star team, yet does receive some All-AFL recognition to go along with his 11 sacks. The veteran has seen in all and has never missed a game. The 40 sacks by this group means that the Chiefs do not have to blitz to put pressure on opposing quarterbacks. The heat applied sure helped the secondary. 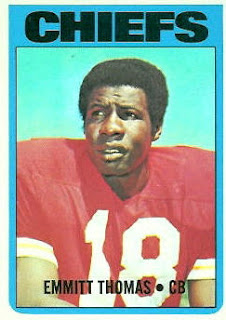 Let us take a look at the revamped secondary. Emmitt Thomas earned a berth on the Western Conference All-star team at left corner in 1968, yet he is moved to right corner in 1969 and leads the league in interceptions. Though he is not a great tackler, he is willing when asked. Thomas is more than adequate as a zone defender, but he is outstanding in man coverage and alert in playing the ball in flight. First-round draft choice Jim Marsalis has an outstanding season at left corner. Quick, athletic, and tough (ask Bobby Crockett) he is tested, and proves he is the final piece the Chiefs defensive puzzle.

Jim Kearney had much to learn, and as such the Detroit Lions let him go, and he is no doubt a work in progress at left/strong safety. A fine run defender, he is swift enough to play man coverage on tight ends, and has proven to also be a big play man (ask the Broncos). 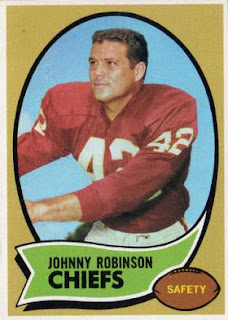 Johnny Robinson is the best safety in the ten-year history of the AFL. Savvy, resilient, and very instinctive—JR is always in the right place. He is superb at covering running backs out of the backfield in man coverage, demonstrates the ability to play the deep pass in weak side roll coverage, and is an experienced deep pass "centerfielder". Robinson records 8 interceptions and is again All-AFL.

The Chiefs defensive passer rating is a league-leading 42.1 under the guidance of Tom Bettis. Tom learned defense as a Green Bay Packer middle linebacker under Phil Bengston, and a season with the champion Bears under George Allen. Bettis can mix and disguise coverages with the best of them. Though he is not listed as defensive co-ordinator—film study shows Bettis learned his lessons well.

Finally to a group that over time has become known as one of the best linebacking trios in pro football history. Jim Lynch played very well in 1968, and even better in 1969. He didn't blitz often, though he was very effective opening day against the Chargers. A fine tackler, he understands his role at right outside linebacker. 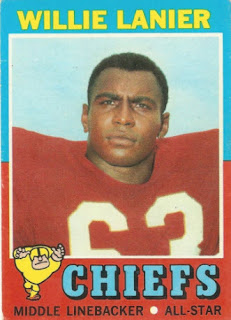 Willie Lanier in just three seasons has proven himself to be the best middle linebacker in the history of the AFL. A leader, this explosive tackler can blitz if asked, but more importantly can play coverages most middle linebackers cannot. "Banjo" is not used frequently simply because you are asking the middle linebacker to take the tight end man to man when the strong side linebacker is blitzing or has the back to his side man-to-man. Lanier has the quickness to do this coverage. Willie also can play zone pass defense, and this is never more evident than against the Vikings in the SB.

Finally, the key to the entire defense: BOBBY BELL. Opinions vary concerning who is the best strong-side linebacker in league history. Bobby Bell still is ranked among the very best. Much has been written about his versatility; that Bobby could do this, or do that or play any position—hell, he could probably fly the plane, and drive the team bus if asked.

The Chiefs at times play a gap control defense with their lineman and align Lanier and Bell almost side by side inside between the tackles. Thus, no team is going to have much success running inside. This alignment invites opponents to sweep strong side, but Bell is so quick for a man his size—he pursues properly to stop the sweep (81 tackles). Bell is effective on the blitz with 5 sacks and can play either man or zone coverage. 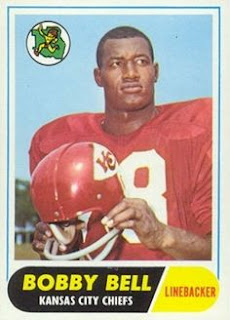 He is the poster boy for big plays and is again First-team All-AFL. An aspect that has never been discussed, but will be listed here:  durability. All eleven Kansas City starters play in 14 games, this is unheard of. In summation; possibly someone will read this saga and let Mr. DiRocco know it exists. The Super Chiefs defense of 1969 is significant.
Posted by TJ Troup at 4:37 AM