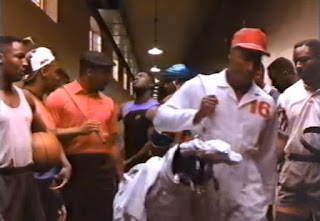 Bo knows football. Bo knows baseball. Nike made a great commercial showing Bo knew all sports. And maybe he did.

Today, Bo Jackson Tweeted (verified account) this, "If you’ve never strapped on the pads you have no business commenting on something you know nothing about."

Well, of course, we get the obvious point and yes, Twitter is not a format known for complete thoughts and essays into subjects. So, we give Bo a break. But it does raise a question.

And to limit this to the NFL, is Bo suggesting those who didn't play on an NFL level "have no business commenting"? Or could you have strapped on pads in college and then be able to "have business commenting" on this kind of subject matter? What about high school? Pee Wee?

Jackson is saying something similar to what we've heard over the years from NFL players. Not all of them, of course, but some. It's the notion that sportswriters (and other media) don't know enough to comment on the NFL. And maybe they are right.

We've had conversations with people who want NFL players, especially Hall of Famers to have more of a voice when it comes to voting players into the Hall of Fame. And we get the sentiment. And there are some players who would be good at it (and there are two now, Dan Fouts and James Lofton).

However, we've spoken to Gold Jackets who have not followed the game for 2-, 30 or 40 years. We've asked the question to players "Who do you think should be in the HOF who is worthy?". We got a response from one player that was a bit odd. We later found out that the two were best friends and whose families vacationed together.

We've heard scores of stories of Gold Jackets pushing for their teammates, or guys they coached or drafted (in the case of the GMs who are now in the HOF). It can get partisan.

So, in our view, it's a poor idea. But still, Jackson's comments remain. At what level does someone have to have played to earn the right to comment on Luck's retirement?

Would Paul Zimmerman who played semi-pro ball qualify? What about Peter King? Rick Gosselin? Ira Miller? Or the late Bob Oates? Ira Miller? All these are in the writer's wing of the Hall of Fame and they have no business commenting in Jackson's view?

Can a man be a good OB/GYN? Can a woman be a fine urologist who treats both sexes? We will stop there before this gets into politics but you get the idea.

Is Jackson right? Are any of us qualified to write about the NFL? Are fans able to comment about Luck's decision?

It seems that it's okay if you respect Luck's decision but what triggered Bo's support of Aikman was Troy's response to Doug Gottlieb. 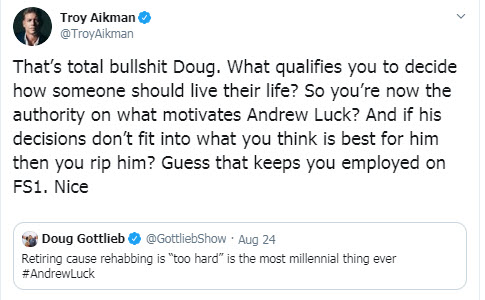 Gottlieb had a "hot take" that we don't agree with and neither did Aikman. And Aikman was a bit masty about it, and that's fine. All's fair on Twitter #LoveandWar. But Jackson took it to a higher level. We don't know Gottlieb's grid career but he played college ball and some minor league basketball but if he played in high school would be it okay with Bo for him to give his view?

Our view is all of us have big mouths. All of us comment on things we no little to nothing on whether it be politics, sports, dating, raising kids, you name it. But maybe Bo fits in that category as well.

Maybe Bo should respect people like the late Dr. Z or King, or Judge, or Miller, or Gosselin, of  Charean Williams. Men and women who have dedicated their careers to covering the NFL and who have brought us a lot of entertainment, insight, and opinion.

Right or wrong, whether they "strapped on the pads" or not they are qualified to report their views or to summarize the views of people who did wear the cleats who may or may not agree with Luck's decision. And they shouldn't me told they are "less" because they "didn't play the game".

And remember Bo—It's just football. It's not quantum mechanics and string theory. If you put your mind to it, you can understand it enough to comment. Just saying.