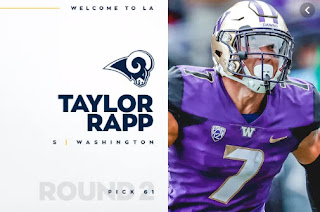 Rams second-round (pick #61 overall) Taylor Rapp started tonights preseason game against the Raiders as a strong safety in place of usual and expected starter John Johnson. And like Johnson Rapp spent a good portion of his night as a linebacker.

When the starters return to lineups Eric Weddle and Johnson will be the safeties and then we will learn the role Rapp will have for the season. At this point, we don't know what the role will be, but after game one of the preseason do know from the film that he played Johnson's hybrid role from 2018—strong safety in one base, an inside linebacker in the alternate base.

Johnson, however, was usually a safety in sub-packages (Mark Barron and Littleton were in ILBs in sub) and tonight, at least, we saw Rapp as a 'backer in sub defenses.