Who Are the Top Senior Defensive Tackles That Could be Considered for the HOF Centennial Class? 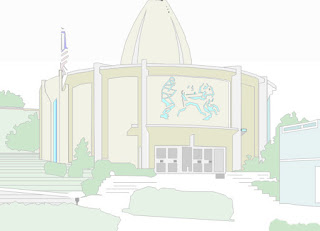 As we've recently discussed there are a number of players that will be considered for the expanded 2020 Centennial Class for the Pro Football Hall of Fame. In this post we preview the defensive tackles. 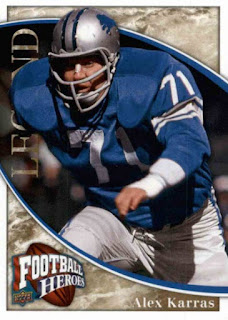 Karras was as good a pass-rushing tackle as there was in the 1960s, maybe was the best. He played on a fine defense that was good at stopping the run and getting to the quarterback year-in and year-out.

He had a 'hop-and-d0dge' style, like a basketball player using short-step footwork to get by an opponent—which was a unique style. Karras paired with Roger Brown in the early-to-mid-1960s and were as formidable pair of defensive tackles as there have ever been in the NFL. The Lions didn't get much edge pressure, what they did have was from right outside linebacker Wayne Walker. If they had defensive ends that were even Pro Bowl level the Lions 1960s defensive line would be remembered as one of the best ever.

From 1960-70 the Lions were top three is fewest yards rushing allowed and in total sack yards and were second in yards per rush allowed.

He played a dozen seasons and was a 1960s All-Decade pick and was a four-time First-team All-Pro and was a Second-team All-Pro five additional times. We have his career total for sacks at 98½ but records are spotty for his first couple of seasons, so we are convinced he had over 100 sacks, maybe as many as 105, 110. But the exact total is unknown. However, that number of sacks in 12 seasons makes him among the best pass-rushing tackles ever. 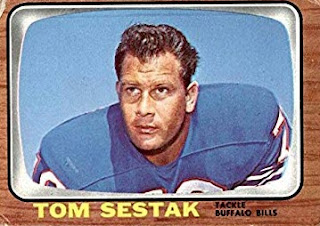 A big man who was like a combination of Bob Lilly and Merlin Olsen of the AFL but a knee injury felled him. He was not as big as Olsen not as quick as Lilly, he was right in between.

He was very solid versus the run and could get after the passer, totally 17½ sacks one season.

In the mid-1960s the Bills were the top defense, especially against the run and in getting to the quarterback. In his career, the Bills were top five in top run defenses in pro football.

They would vary their fronts, using a goodly amount of 3-4 defensive looks putting Sestak at the end sometimes and on the nose sometimes. It would have been great to see what kind of career he might have had, if healthy.

He may be the best AFL player (peak value anyway) not in the Hall of Fame. 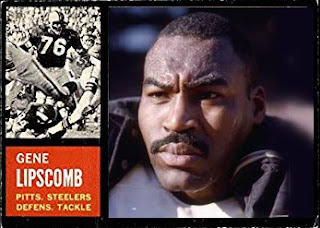 Big Daddy could have been the best All-time, or at least the best of his era. Effort on the field and drinking off the field spoiled that. He began as a Ram and played both tackle and end but got released.

The Colts picked him up and being surrounded by Gino Marchetti, Art Donovan and Don Joyce brought out the best in him. He was All-Pro in 1958 and 1959 and according to Coach Weeb Ewbanks' statistics, he led the Colts in tackles both seasons. He would even, at times, play inside linebacker in a quasi 3-4 look. In that era when teams played a 3-4 they usually dropped one of their ends as an outside linebacker. Not so with the Colts, they moved the Daddy to linebacker and the ends stayed put.

With the Colts he was a sideline-to-sideline player (a cop or 'policeman' as it was called), often running down plays from the backside of the play. When he when to the Steelers, his play changed into more of an up-the-field player, evidenced by his 1961 season when he had 17½ sacks, leading the NFL (unofficially) and would have been a great candidate for Defensive Player of the Year, though such an award didn’t exist. He followed that up with 10 sacks in 1962, his final year.

In all, Lipscomb played ten seasons and 112 games. He was a four-time First-team All-Pro (three consensus). 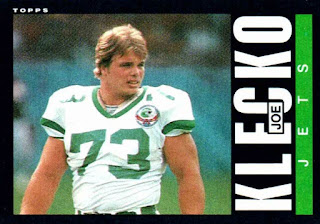 He was All-Pro as an end in 1981 and as a nose in 1985. He also went to the Pro Bowl as a tackle. So, in the end, we put him with the tackles and included his nose tackle work as part of the evaluation—making him the exception to our rule. Regardless, he was a fine player and deserves Hall of Fame consideration.

A closer look at his Proscout, Inc. scores does show that Mark Gastineau was very close to Klecko, however. Gastineau bears the brunt of the criticism for that but Kelcko (and Marty Lyons and Abdul Salaam) also deserve some of the blame. One man cannot make a run defense as bad as the Jets were in 1984 in stopping the run, for example. 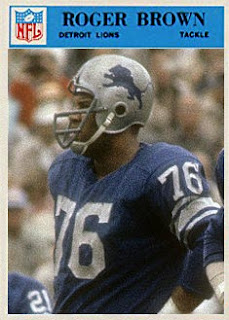 Brown would be a star today. Massive size, good quickness. He might be compared to a Ndamukong Suh or Jerome Brown. He had six sacks in the famous 1962 Thanksgiving massacre of the Green Bay Packers and was also great the rest of that season. He was named the LA Times NFL Lineman of the Year and he also got AP and UPI Player of the Year award votes (rare for a defender in those days).

Brown played ten years and 138 games and was a First-team All-Pro twice, a Second-time All-Pro three times and was a six-time Pro Bowler. 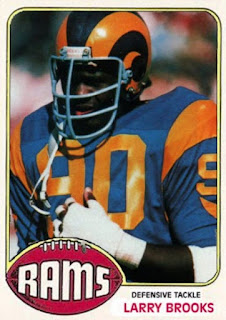 Also overlooked. Was a dominant player versus the run, he was a master of the “butt technique” where he just slam a guard’s momentum. And if pass showed he’d convert to a pass rush move. He also could twist his upper body and quickly slip (usually swim) a guard a move that impressed his teammates.

In all, he played eleven seasons and 131 games, was a First-team All-Pro twice and a Second-team pick one additional season. He went to five Pro Bowls and was a First- or Second-team All-NFC pick six times. He led the Rams defensive linemen in tackles from 1973 through 1980, except for 1975 when he was out half the season with a knee injury.

“A fine interior rusher with fine moves and body control. Guards swear it is impossible to block him” according to Buchsbaum.

We are not suggesting he will get any Hall of Fame support because that's very unlikely, but we are saying he was as good a defensive tackle, if not better than then any listed here and the same applies to a few who are in the Hall of Fame according to him study. 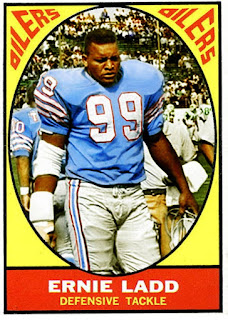 The Big Cat who was a pro wrestler as well, was 6-9, 335 pounds. At times he was dominant (he had a 4½-sack game) but also didn’t always seem to give full effort. He, at his peak, could have been the best, but gripes about pay and other issues held him back, he was an all-time talent but not quite an all-time great. 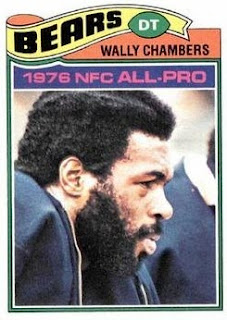 Chambers played a bit of defensive end early in his career but moved to tackle and was a dominant one from 1974-77 (hurt a knee mid-season 1977). He was traded to the Buccaneers where played left DE until the knee gave out for good. 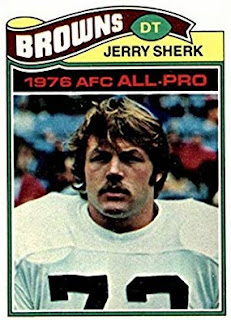 Another player who had knee issues. A solid player who often totaled over 100 tackles a season ended his career with 69½ sacks and was the 1976 UPI AFC Defensive Player of the Year. He was First-team All-Pro that year and went to four Pro Bowls. He reached double digits in sacks four times (1972, 74, 76 and 79) and was credited with 6 blocked kicks/punts (one was a tackled punter which is the same as a block).

Sherk was a prolific tackler averaging just under 90 tackles a season from 1970 to 1979. He missed significant time in 1977 with the knee injury and almost all of 1980 with it. In 1981 he came into games as an inside rusher in the nickel defenses of the Browns. In the mid-1970s some writers like the respected Cliff Christl felt that Sherk was the most consistent defensive tackle in the game. 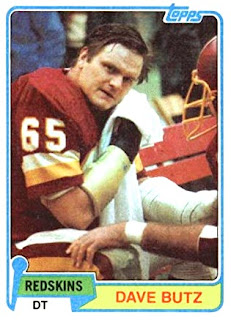 At 6-7, 295 (or more) Butz was a classic 4-3 tackle for the George Allen scheme. Much like Ndamukong Suh, he’s one who opposing guards judged by how sore they were the days after the game rather than the tackles or sacks they gave up.

Butz began his career as a defensive end with the St. Louis Cardinals, making him one of the biggest players at that position for his era. He injured a knee and signed as a free agent with the Redskins (Redskins had to give two first-round draft picks as compensation) and was a backup for a year with the Skins before taking over the left defensive end spot in 1976. He was a Second-team All-NFC pick in 1979 and a Second-team All-Pro in 1984 but 1983 was his ‘career year’. He was also a Second-team selection on the Pro Football Hall of Fame All-1980s Team.

That year he totaled 69 tackles and 11.5 sacks and forced five fumbles and was a consensus All-Pro. Notes from George Allen’s playbooks note that Allen loved Butz’s play versus the run but wished he would perform the “Jet” technique better. This was just after the 1977 season, his second as a starter when he totaled just one sack after having 3½ sacks in 1977. Perhaps it was communicated to Butz because from 1978-86 Butz averaged 6½ a season, not a stunning total, but an excellent one for a man of his size.  Butz ended his career with 63 sacks and deflected 40 passes at the line of scrimmage.

Butz's teammates felt he was the ideal left tackle for the George Allen/Richie Petitbon defense—"he played defensive tackle the way it was supposed to be played".  He was also hard to move. Right guards and even tackles always mentioned that when we asked them about Butz—he was a "mountain of a man" they said. 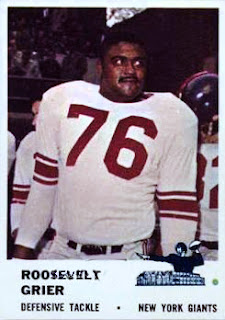 With the Rams fearsome foursome, he was the “cop” or “piano player” who watched from draws, screens, and traps while Jones, Olsen, and Lundy got up the field.

Grier began with the New York Football Giants in 1956 and played there through 1962. As a Giant, he was a First-team All-Pro once and a Second-team selection twice and counting Pro bowls and All-Eastern conference selections garnered post-season honors in six seasons. With the Rams he was an All-Western Conference pick and Second-team All-Pro. It was with the Rams that he made history with the Fearsome Foursome.

Grier was a big man for the day, 6-5, listed at 290 but was like heavier, especially with the Rams but had excellent quickness. It’s said that he taught the head slap to Deacon Jones, who then perfected it.

Grier was a HOF Finalist in the past but his active candidacy was short-lived.

The challenge for the Blue Ribbon committee that will come up with the list of ten senior players is how to rank the candidates. Do they go by peak value or career value?

In this case, we'd say the top peak players are Tom Sestak and Big Daddy Lipscomb but Lipscomb's career did have the period of lack of effort and Sestak was felled by an injury. Karras likely has the highest career value, being very good for a long time and also some high peak seasons.

Klecko is unique in that he played three positions well, actually more than that but he was First-team All-Pro and two of those positions and a Pro Bowler at one more. However, his peak does not match that of some others and he didn't have the career value of Karras.

The rest are in-between, Brooks and Ladd had high peaks but Ladd, like Lipscomb there were some negatives. Chambers and Sherk both won AFC/NFC Defensive Player of the Awards and Chambers career was cut short by injury and Sherk's was, too, though he was able to come back to get a few more years but really, only 1979 was to his previous level and that was injury marred, too.