Maybe We Were Wrong and Bo Was Right 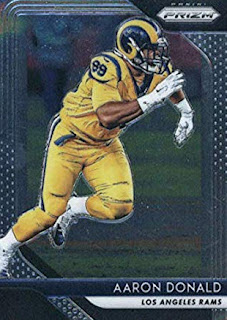 Maybe Bo Jackson was RIGHT.  Yesterday we opined that Bo Jackson erred when he expressed a view that one had to have played football to give a valued opinion about Andrew Luck's retirement. Skip Bayless took a step back for non-players commenting on football this morning.

Skip Bayless stepped into it this morning with his rant about Aaron Donald not being worthy of being called the NFL's best player on some meaningless list. And to be fair, maybe no defender is as good or valuable as the best quarterbacks. But that is a topic for another day. 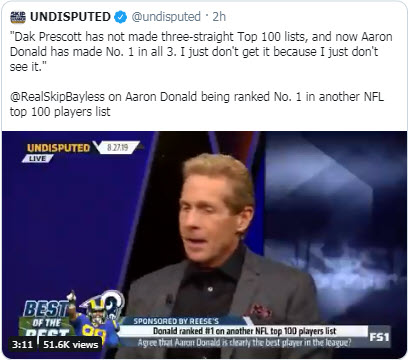 Bayless, a sickening Cowboys homer in our view but as a television baffoon, he serves his purpose—to create buzz and ratings for his employer.

Among his "points"was that "he'd" never need Donald "take over a game" like he saw Charles Haley or Reggie White or Lawrence Taylor do. Leaving aside Bayless picked three edge rushers (though White would move inside in the 46 defense and played some inside in base as well) while Donald is a three-technique, almost always aligning on or just outside the shoulder of a guard it just shows Bayless (and his staff) doe not do his homework.

In Lawrence Taylor's first five seasons he was a five-time All-Pro (though 1985 was iffy), five Pro Bowls and was a two-time Defensive Player of the Year and totaled 50½ sacks.

Donald in his first five totaled 59.5 sacks and two Defensive Player of the Year Awards and was a four-time All-Pro and five Pro Bowls.

Charles Haley totaled 56.5 sacks in his first five years was All-Pro once and went to two Pro Bowls.

Bayless has always been a sketchy guy in terms of his opinions, some of them so off-the-wall you have to ask if he's playing a role, a guy who says silly things in order to create buzz for himself in order to further his career. But we've listed and read enough of his stuff, starting in the 1970s in the LA Times to think he actually believes some of what he spews. But we don't know what's in his heart.

We do know that if this kind of thing, the stuff he spoke today, is what's on his mind then it is easy to see why he no particularly liked in NFL circles (based on our conversations over the years with fans and writers, not to mention Troy Aikman's public comments about Bayless).

In this case, we think Aikman probably has it right. And maybe Bo was, too. Bayless, more or less, proves his point if Bayless is unable to see the rare player Donald is.
Posted by John Turney at 11:09 AM