LOOKING BACK
By Chris Willis, NFL Films
Last week the final five members were selected by the Pro Football Hall of Fame for the Class of 2020. Also selected last week were the new members of the Kentucky Pro Football Hall of Fame. NFL players, coaches, executives who either played, coached or were born in the state of Kentucky can be selected. The 19th class inducted includes six individuals, Leeman Bennett, Bob Fry, Elois Grooms, Cletidus Hunt, Eric Wood, and Glenn Presnell.

I was happy to see Glenn Presnell get this deserving honor.

A borderline candidate for the Pro Football Hall of Fame, PFJ ranked Presnell number 10 on the list of Pre-WW II halfbacks this past year. Here is the bio that was written up on him.


Glenn Presnell (1931-1936) After playing 3 years with the semi-pro Ironton Tanks, the 5-10, 195-pound Presnell played 6 seasons (74 games) with the Portsmouth Spartans-Detroit Lions. Severely underrated, Presnell has two things that has kept him out of the Hall of Fame. His first years were played out of the NFL, although with a good Tanks team that defeated NFL teams during this era, and the fact that he played behind the number one player on our list- the great Dutch Clark. Excellent all-around player, Presnell excelled in many areas; was a productive runner, above-average passer, solid defender, and was one of the best kickers in the NFL during his time…Member of the 1935 Lions team that won NFL Championship—22 career TDs, including 18 rushing; and had 17 passing TDs…to show how great Presnell could be, when Dutch Clark decided not to play in 1933, Presnell became the focus of Potsy Clark’s offense. Had a career year leading the NFL in rushing TDs (6) and scoring with 64 points. He was named First-team All-Pro by the NFL, UP, Brooklyn Eagle, Collyers and the GBPG…in 1934- with Clark back on the team- he finished third in the league in scoring (63 points) and rushing TDs (7).

“Presnell was a good player. He was hard to bring down when he had the ball. You couldn’t hardly bring him down.” – George Musso, former Bears Hall of Fame lineman.

“Glenn Presnell was a brilliant football player. Outstanding on offense and defense.” – Ralph Kercheval, former Brooklyn Dodgers back.
After his playing career was over Presnell went into coaching, first as an assistant with Kansas, Nebraska (one year as head coach in 1942), and then at Eastern Kentucky (1947-1953). It was at Eastern Kentucky is where he made his mark. He was head coach there for ten seasons (1954-1963), compiling a record of 42-49-3, winning two Ohio Valley Conference championships (1954, 1962), and taking the Colonels to the 1955 Tangerine Bowl (losing a close 7-6 game to Omaha).

Presnell stayed on as Athletic Director from 1963 to 1971 when he retired, eventually moving back to the Buckeye State, living in Ironton, outside of nearby Portsmouth. It was because of his tenure at Eastern Kentucky that got him elected to the Kentucky Pro Football Hall of Fame.
I was fortunate to interview Presnell twice while he was still living, once in 1999 and again in 2002. His interviews became a short chapter in my book, Old Leather: An Oral History of Pro Football in Ohio, 1920-1935. He was always very accommodating and told some good stories about his playing career in Ironton, Portsmouth, and Detroit. Once he told me about the Spartans traveling by bus to play games on the east coast.

"We didn’t travel by train much in those days; it was mainly by Greyhound bus. Some of our road trips east would be pretty long and we wouldn’t have a chance to work out, so Potsy (Clark) told us to pack a pair of shoes and a sweatshirt on the bus with us. We’d be going along sometime in the middle of the afternoon and he’d see this open field, so he’d have the driver stop the bus. We’d put on our shoes and sweatshirts and practice in this open field. We’d get back on the bus after the workout smelling like a bunch of goats. Those were great days."

Only a player from the Great Depression would think smelling like a goat would be great days. 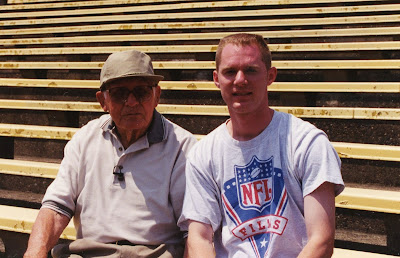 Presnell also told about the playing equipment for his era and how he would want to be remembered.

"Our equipment was nothing like today. Ours was made out of leather, which made the equipment much heavier. By the time you got on the heavy shoulder pads, the heavy hip pads, and other pads, you felt like you gained 30 pounds. I was fortunate. I was never really injured like some of the players from my era. I remember our helmets didn’t have any facemasks back in those days and if a guy got hit in the face, he would lose some teeth or maybe got his nose broken. That happened to several of my teammates at different times, but I was lucky. I must have been a good dodger because I was never really hit hard in the face. But I enjoyed it.

It was a challenge to me to see whether I could make it in pro football or not. I enjoyed my nine seasons of pro ball very much and made a good living while doing it. I’d just like to be remembered as a good football player. That’s all."

I cherish those two interviews I had with Presnell. Looking back at an era of NFL history that was worth preserving. Presnell passed on September 13, 2004, at the age of 99. Congrats Mr. Presnell on your election to the Kentucky Pro Football Hall of Fame.
Posted by cdw83 at 8:30 AM