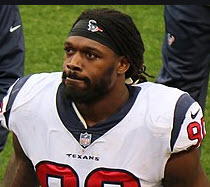 Without a doubt, Jadeveon Clowney is an elite rusher, either from the edge or as a "joker" or "spinner" from the inside (a standing 3-technique if you will).

Pro Football Journal named him First-team All-Pro on 2016 and Second-team All-Pro in 2017 for not only his rush skills but his knack for nailing runners in the backfield for losses. We think he has the best swim move in the NFL, bar none. And his long arms help him stand off tackles until he sheds them to make a tackle in the run game.
Our only question mark is his durability. Not his toughness, his ability to play 60 minutes for 16 games. Of course, no one goes 60 minutes, it's shorthand for playing almost all the snaps for all the games. And Clowney has only done that once in his six seasons. He's played 75 of a possible 96 games, starting 66 and played about 61% of his teams snaps in his career, When healthy (2016-18) he played about 82% of the snaps and was a dominant player in our view (and many others' view as well). But was it enough for the big-time money contract he is seeking?

Clearly, Jadeveon Clowney one of the top (if not the top) free agents available in the 2020 offseason and he's stated he wants to play for a contender.  He's just 27 so he presumably has at least say, four to six prime seasons left. But at how many games a year? Fourteen? Sixteen? Thirteen?

Unknown, of course. But we think a team would be wise to make sure they are covered with plenty of incentive clauses based on games played or snaps played in this case due to his penchant for being nicked. There have just been too many times when we wanted to watch him play and for whatever reason, he wasn't in the lineup.

We'll wait and see, but he will get top dollar, but we're curious to see the fine details when they come out to see if the performance incentives revolve more around playing time than tackles and sacks.
Posted by John Turney at 1:29 PM