LOOKING BACK
By Chris Willis, NFL Films
OTD fifteen years ago, in 2005, well-known football historian-author, Richard Whittingham passed away of a heart attack at his home in Wilmette, Illinois. He was 66 years old. Growing up in Ohio, Whittingham was one of my first football writing heroes. Over his lengthy career he wrote over 30 books, mostly about pro football. I was around 15 years old when I read his book, What a Game They Played: Stories of the early days of pro football by those who were there, for the first time.

The remaining chapters were filled with stories from borderline Hall of Fame candidates, including Joey Sternaman, Glenn Presnell, John “Shipwreck” Kelly, Harry Newman and Jim Benton. What a Game They Played was 235-pages in length, had 29 photos, and each chapter had a short bio and an average of 5-11 pages in length. At the end of each interview was a colorful anecdote.

Over the past 30 years I’ve read and re-read What a Game They Played more times than I can count. It’s one of the few books I keep next to me while I write. Actually, it was my inspiration when I started writing about football. My first book, Old Leather: An Oral History of Early Pro Football in Ohio, 1920-1935, was an homage to Whittingham’s work.

I’ve listened to Whittingham’s tapes of his interviews for What A Game They Played and you can just hear the history coming through the voices of some of the NFL’s greatest pioneers. The book that came from these interviews is one of the best football books ever written. Sports Illustrated in 1984 wrote: “Anybody who skips Richard Whittingham’s What a Game They Played…just about has to be un-American…Whittingham turned on the tape recorder…and the result is pure pleasure.”

The ability to preserve the history of pro football with oral history wasn’t new, as The Game That Was (1970) by Myron Cope and Pro Football’s Rag Days (1969) by Bob Curran had been published over ten years earlier than Whittingham’s book. But just like those volumes of work, What a Game They Played continued on that legacy of preserving the early history of the NFL. Old stories re-told by the likes of Red Grange, Johnny Blood and Don Hutson was mixed in with fresh new interviews with Ace Parker, Joey Sternaman, Glenn Presnell, Jim Benton and the colorful John “Shipwreck” Kelly.

As a young fan of the NFL reading these early stories brought me close to the game’s early years. It gave me a front seat of the era in which the NFL was founded and was played on dirt fields by players who played both offense and defense for just a few bucks. I loved reading What a Game They Played in 1984 and I continue to love reading it in 2020. I thank Richard Whittingham for that.

Richard Whittingham was born in 1939 on the North Side of Chicago, growing up in Bears country. He attended Loyola University and quickly made a career as a freelance writer. Something he always dreamed about doing. “He always knew what he wanted to do. He wanted to be a writer from the first time I met him,” once said his long-time wife, Ellen.

A soft-spoken man, Whittingham was a voracious reader and a passionate writer. We interviewed him once in 1999 for nearly ninety minutes. His interview appeared in many NFL Films production that season and in future years.
I never really told him what his writing and research meant to me. But his influence is definitely felt in reading and learning about the early days of pro football and the NFL- as well as in my career and in my writing. I’ll remember him well and his legacy lives on in his many volumes on the NFL, its teams, and players.

Other books by Richard Whittingham that I highly recommend are:

Sunday Mayhem: A Celebration of Pro Football in America (1987)
Meat Market: The Inside Story of the NFL Draft (1992) 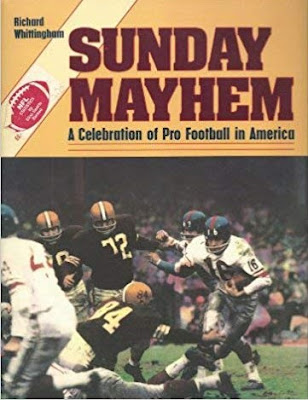 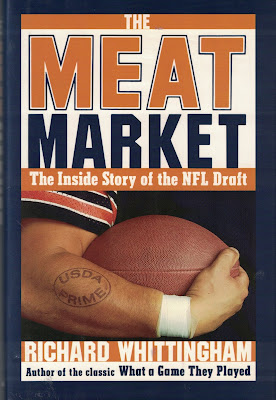 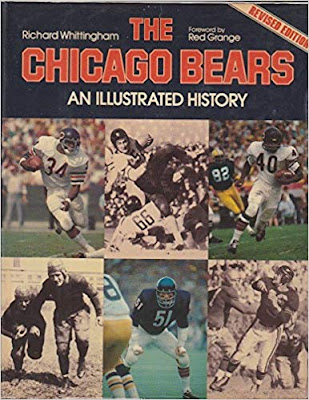