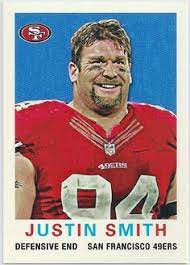 Six years ago when Justin Smith retired his team, properly, made a big deal of it.  49ers CEO Jed York said, "Justin was "Tough. Physical. Durable. Hard-working. Dedicated. Selfless. Whether it was chasing down a wide receiver and forcing a fumble to seal a win, or driving a tackle back into the quarterback's chest, he gave everything he had every play."

49ers general manager Trent Baalke added, "Justin is the consummate professional whose impact on this organization can never be measured by statistics alone. His durability, competitiveness, work ethic, strength, and rare stamina helped set him apart over his 14-year career. Cowboy will go down as one of the best to ever wear a 49ers uniform and his candidness, work ethic, and pure passion for the game will be missed"

"As a football coach, you will always be searching for the next Justin Smith, knowing full well you will never find a player quite like him," said 49ers head coach Jim Tomsula. "Justin never concerned himself with personal accomplishments, his unselfish nature made that impossible. People like to say 'they broke the mold with him' but there was never a mold. Justin Smith is a hand-crafted football player."

Robert Saleh said, "Justin Smith is pure strain and violence that he played with inside. I mean he was just a Brahma bull in there, just so strong." 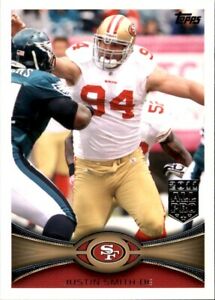 In 2021 he was on the Hall of Famer's preliminary list but this year he's already fallen off of it. That does not mean he won't be back on it and also, he may not be a Hall of Famer ultimately. And right now there are two extremely qualified 49ers on the list Bryant Young and Patrick Willis that will hopefully get in soon.

However, whether he ever gets into the Hall of Fame or even Final 15 or Semi-final list of 25 is necessarily relevant to remembering an excellent player. After all, not all great players end up in Canton, sad to say, especially if you are a blocker or tackler. Skill players have an easier route because they have "stats" even if the stats are skewed due to the extreme passing league the NFL has become.

When he joined the 49ers he became a player like Howie Long, Dan Hampton, Richard Seymour, .. Watt—like that. He was a base 3-4 end and a defensive tackle in nickel situations and in doing that he was one of the best, In fact.

In 2011 and 2012, he was named to the Associated Press All-Pro team both as a defensive end and as a defensive tackle. That was one of the flaws in the AP voting system and continues to this day—it does not handle players who play different positions in the nickel packages. 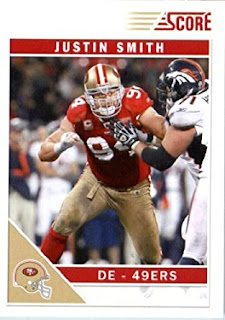 Upon Smith's arrival to the Bay area—2008 through 2014, the 49ers allowed just 3.71 yards per rush, tied the best in the NFL in that span, and were second in the fewest rushing yards allowed. They also allowed the third-fewest points in the NFL and were second in sacks. Smith (and Willis) were a big part of those achievements

They also got to the Super Bowl but lost to Baltimore.

In his dual roles as a run-stopping end in the base defense and the interior rusher in the sub-packages Smith was great at both. He had great base—the ability to take on blocks and stay low, so he couldn't be moved and as a rusher, he was relentless and could take on double teams and still push the pocket.

Starting around the time Smith went West organizations like Football Outsiders, Pro Football Focus, the 49er coaches themselves began tracking hurries and pressures and Smith was almost always among the league leaders among interior defensive linemen. The hurries/pressures numbers are not in agreeance among the different organizations, it is a subjective stat, but they all agree he had top-notch numbers.

Smith began in the NFL as a 4-3 end with good speed and strength. Here are some quotes around NFL draft time 2001 when he was the fourth overall pick— 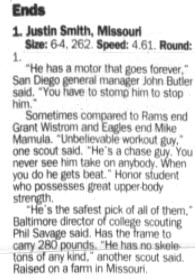 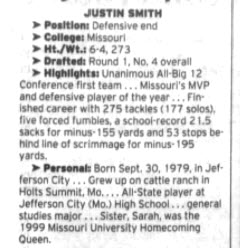 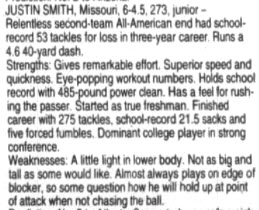 He had reported 40-yard dash times of 4.59, 4.64, or 4.7 depending on the report you read. He had good strength with 26 reps of 225 pounds. Dick LeBeau told the press, "I couldn't be happier we got the fastest defensive lineman in the draft".
With the Bengals, he was a 4-3 defensive end, and though he didn't have the sack production hoped for he put good pressure on the quarterback. He had a great ethic, smarts.
From watching footage Smith was mostly a weak-side end his rookie year and the next year he was usually on the tight end side in the base defense. There were exceptions, of course, but he did drop into zones quite a bit in Dick LeBeau's zone blitz calls.
After that, he settled in at right defensive end with the exception of 2005 when he was the left end in their base. He was amazingly durable in his Bengals career, never missing a game due to injury (he missed one his rookie season due to a holdout) and usually playing over 90% of the team's defensive snaps.
He was franchised in 2007 and that year he had just two sacks (though he played an NFL-leading 97.9 percentage of plays among defensive linemen), and that low sack total likely led to him not being signed by the Bengals to a long-term contract and becoming a free agent where the 49ers signed him to a six-year contract for $45 million.
In Smith's first year in San Francisco was a 4-3 end and a 3-4 oustide linebacker in what Mike Nolan called a hybrid 3-4 scheme— 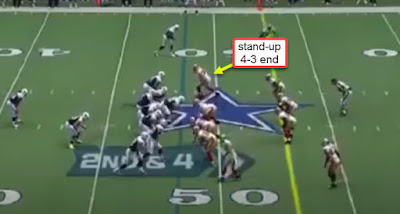 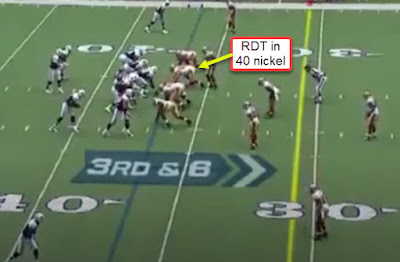 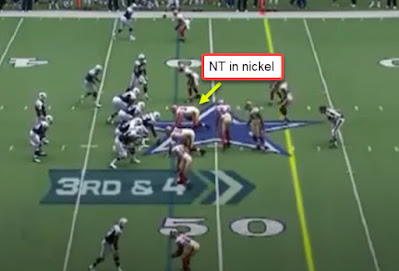 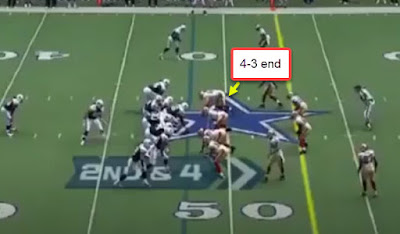 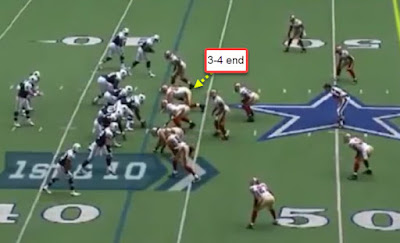 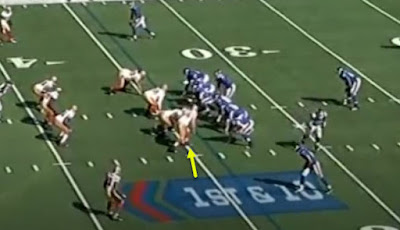 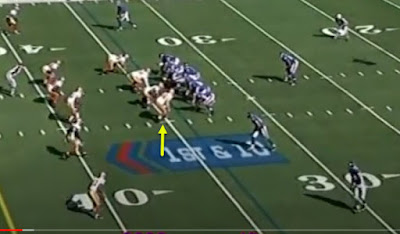 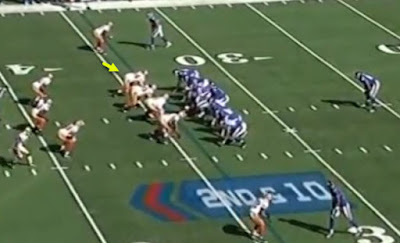 In that scheme, as seen in the stills above Smith would play end, stand-up (de facto outside linebacker) and began playing tackle in nickel/dime situations.
Statistically, he was his usual self, 73 tackles, 7 sacks and, we suppose, between 26 and 52 pressures—basically the same as a couple of previous seasons but in was in 2008 that Smith seemingly found the role that suited him—30 end and nickel right tackle.
Career stats— 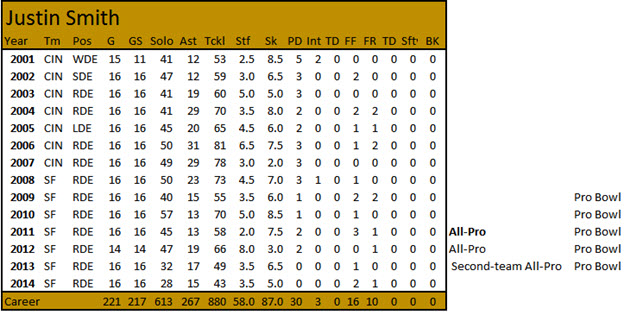 Smith's pressure numbers (and yes, we're aware of the diverse numbers but it shows a lot of pressure no matter what source you prefer)— 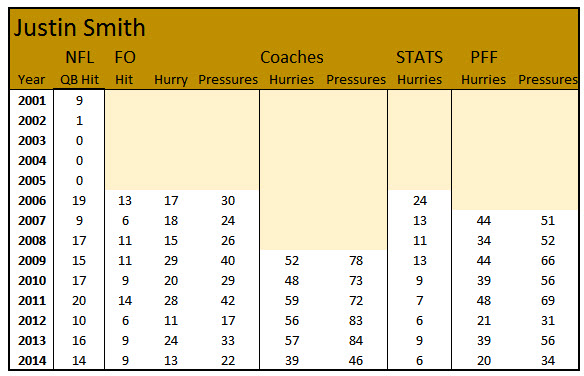