By John Turney
Former NFL  player Roger Brown died around this morning at 2 A.M. Friday according to media reports, no cause of death was announced. He was 84.
Brown played in the NFL from 1960 to 1969 for the Detroit Lions and the Los Angeles Rams. He'd been inducted into the College Football Hall Of Fame, the Black College Hall Of Fame, and the Virginia Sports Hall of Fame. He also was voted to the Pro Football Researchers Association's  Hall of Very Good in 2007.
Brown, a Virginia native, went on to play for Maryland State College (now Maryland Eastern Shore). Brown the team to a conference title in 1957 and an NAIA All-American in both 1958 and 1959.  He also was named twice to the Pittsburgh Courier Black All-America selection,
He was drafted 42nd overall in the 1960 NFL Draft by the Detroit Lions.—he was a huge man, 6-5, 300-pounds (34-inch thighs for whatever that is worth), but could still run well. Teammate Harley Sewell said he could "run like a deer".
He started 124 of 138 games in his NFL career, amassing 78 sacks, 2 interceptions, and 3 safeties. He had double-digits in sacks in four seasons with a career-high 14½ in 1964. In 1962 he had two safeties and one in 1965 and retired tied for the most in NFL history in that category.
Brown was First-team All-Pro in 1962 and 1963 and was Second-team All-Pro in 1961, 1964, and All-Conference in 1964, 1965, and 1966 and a Pro Bowler from 1962-67.
Right defensive tackle Roger Brown (#76) manhandles the left guard
In 1962 he was the leading rusher in the so-called Thanksgiving day Massacre when the Liones routed the defending NFL champions Green Bay Packers 26-14, sacking Bart Starr 11 times and giving the Packers their only loss of that season.
On that day Roger Brown had at least five sacks and possibly one more but since the full game has not been recorded we may never know for sure who got the one sack that was not identifiable by gamebook or film. Anecdotal evidence suggests he had six but it has not yet been confirmed.
The Lions report that he had seven sacks that day, however, the gamebook suggests that five of those are accounted for by other players so it does, as we mentioned, leave room for a sixth sack for Brown.
Regardless Brown forced two fumbles and scored a safety as well.
That year he was named the NFL Pro Lineman of the Year by the Los Angeles Times and receiver two votes for MVP by both the AP and UPI. Had there been an award for Defensive Player of the Year, Brown would have likely won it.
In 1967 Brown was traded to the Los Angeles Rams as a replacement in the Fearsome Foursome for Rosey Grier who had gone down with an Achilles injury.  Grier was injured on September 1st and the Rams acquire him on September 8th. The price for Brown was steep, a first-, second-, and third-round pick but George Allen wanted to ensure that his front four did not lose a beat.
It didn't. In 1967 and 1968 the Rams defense was better than ever with Brown, who was younger than Grier (who was still a fine player in his time with the Rams 1963-66).
One uniform oddity is Brown should also be credit as one of the first, if not the first NFL player to wear short sleeves on his jersey to make it harder for offensive linemen to grab him. That became more and more common throughout the 1970s and now, no one has sleeves.
Brown was available because the Lions were concerned about his left knee which was hurt in 1964 but had to have surgery again in the 1967 off-season. Also, though listed at 300 pounds he weighed more than that, and at that point in time teams didn't want players that were "too big".
Lions head coach told the media, "We are looking to the future and we feel the younger players will be adequate replacements". Brown, however, was not please, at least initially telling newsmen "I hope I am around long enough to hurt the Lions". 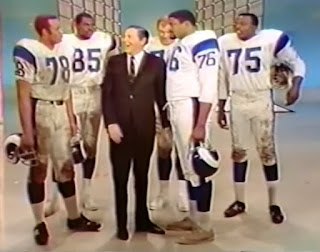 In 1969, perhaps sensing he was getting older, reported at 285 pounds, the lightest he'd been as a pro. But he broke his hand and missed most of the preseason and when he came back he'd lost his starting job to Coy Bacon though they rotated some and Brown got a lot of snaps on running downs, by then his forte. Bacon was the "rusher".
In late August 1970, Brown retired. He was not able to get himself into "playing shape". He reported to camp weighing 334 pounds. And he also likely had an eating issue. Rams players have told us he'd order pizzas after lights out and consume them voraciously.
The issue continued after his career and his weight reached 450 pounds and a related health scare caused him to change his lifestyle. He had his stomach stapled and then maintained his diet dropping to 225 pounds for essentially the rest of his life.
After football
Brown became a restauranteur as the owner of Roger Brown's Restaurant & Sports Bar in Portsmouth, Virginia. He owned several fast-food restaurants as well.
Detriot Lions owner Sheila Ford Hamp released a statement reading, “Roger Brown will always hold a special place in our team’s history. Roger’s career accomplishments solidify his legacy alongside some of the all-time greats of our game. We are deeply saddened to learn of his passing, and we extend our heartfelt condolences to his wife, Kay, and the entire Brown family.”
We interviewed him a time or two and found him to be a smart, funny, charming, and a, ahem, handsome man.
Rest easy Mr. Brown.
Posted by John Turney at 12:51 PM