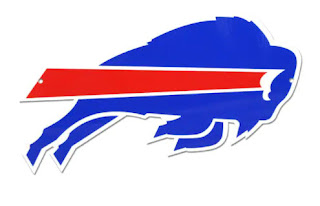 The recent play of Dawson Knox, the Buffalo Bills somewhat unheralded tight end, has many of the team’s followers thinking they have finally found the long-sought replacement for the men who held down the position during the team’s first golden era. If his outstanding performance against the Chiefs on Sunday Night Football (10/11/21) serves as an indication, they just might be right.

The tight end position has been a historically weak one for the Bills. Sure, they have had a handful of solid men play the position over the years, most notably Pete Metzelaars during the team’s Super Bowl run of the early 1990s, but how many others can the average fan name? In fact, the Bills’ search for a viable tight end compares with the team’s recently fulfilled search for a quarterback, a journey that lasted from Jim Kelly’s retirement in 1997 until the arrival of Josh Allen in 2018. The difference is in the case of the tight end, rather than 20 years, it is more like 55! To put it in perspective, the Bills have not had a tight end voted to a Pro Bowl since 1966 and have not had one recognized as perhaps the best in the league since 1964. 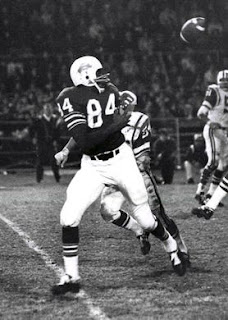 A little background:  Ernie Warlick was the Bills’ starting tight end during the team’s first American Football League championship run, when the team captured back-to-back titles in 1964 and ’65.  Warlick still holds the top-two best season averages for yards-per reception among Bills tight ends (minimum 20 catches) with 20.8 in 1964, and 20.0 in 1963. Paul Costa followed in Warlick’s footprints, taking over the position midway through the 1965 season. Costa still holds the club record for yards in a season by a tight end, chalking up an efficient 726 in 1967, when the leagues were still operating within a 14-game schedule. The Notre Damer also holds the distinction of being the last Bills tight end to receive a post-season accolade, being voted to the AFL All-Star game after the 1966 season. 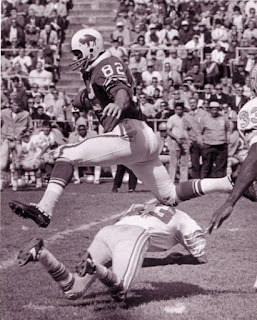 Since then … well, uninspiring might best describe the team’s performance at the position. Aside from Metzelaars, who enjoyed a ten-year career with the Bills that included four Super Bowl appearances, a handful of others have performed decently at the end of the line. Reuben Gant, Keith McKeller (the man for whom the famed K-Gun was named), Jay Riemersma and Scott Chandler each put in a solid year or two, but all failed to attain a level of performance that could be remotely considered elite.

Until now?  Hopefully. Knox has shown flashes of brilliance over his first two years in the league but was prone to an off-putting propensity for dropping the easy ones. As a rookie in 2019, the Mississippi product was considered by many to be the answer to the Bills’ tight end conundrum, but a sophomore lull led to some in Bills Country to beseech the team to go out and select a hot college prospect or sign a big-name free agent. 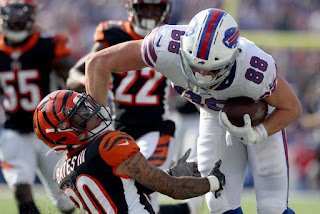 Dawson Knox bowls over Cincinnati defensive back Jessie Bates in
Buffalo's 21-17 win over the Bengals, September 22, 2019.
The Bills coaching staff and, perhaps more importantly, quarterback Josh Allen never lost faith in the six-foot, four-inch, 254-pounder, and Knox was the unquestioned first stringer going into the 2021 season. Thus far, Knox has played like the tight end the team and its fan have been coveting since the mid-1960s. A man who can make clutch catches, be that reliable third-down option, and provide another deep threat for opposing defenses to stop.

Knox’ breakout performance on the nationally televised Sunday Night Football, in which he out-shone future Hall-of-Famer Travis Kelce, had Monday morning pundits standing up and taking notice.  In the Bills convincing 38-20 upset win, Knox connected with QB Josh Allen on three catches good for 117 yards (a 39.0 average) and a 53-yard touchdown strike. Through the first five-game of 2021, Knox has 18 catches for 261 yards (a 14.5 average) and five touchdowns. If he can maintain this pace, he could end the season with 61 receptions for 887 yards and 17 scores, which would set new standards in all three categories. That just might be good enough to give the Bills their first Pro Bowl tight end in five-and-a-half decades!