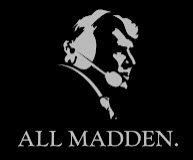 "I am also picking Fred Warner, he's 6-3 and 230 and can run like the wind. He's a sideline-to-sideline guy. And that 49er defense is also a tough one."
"De'Vondre Campbell is also worthy of All-Madden. He makes so many big plays for the packers. If the Packers can win a Super Bowl, say what you will about the offense, it will be  because of the defense and this guy is the reason the defense is much-improved."
"Sure, I know it's three inside 'backers, but it's my team and you need guys that can play and these guys can all play".
Outside Linebackers
"Rookie Micah Parsons does it all. he plays outside linebacker in their normal defense where he plays the run and drops into coverage. But on third down he rushes the passer, he gets after the quarterback. Many are comparing him to Lawrence Taylor's rookie year. Now, he's not Lawrence Taylor yet, but remember, even LT was not "LT" until a few years later. So this kid is special. He's earned All-Madden."
"Darius Leonard's nickname is "Maniac" and you have to have someone named 'Maniac" on any All-madden team. But it's more than that. He's making tackles, picking off passes, forcing fumbles, recovering fumbles, just going crazy on offenses. He's like Wilber Marshall was for those 1980s Bears."
"You need rushers from your linebacking group and TJ Watt is that guy. He's been making big plays for years. Sacks, hits, hurries, pressures, forced fumbles, everything. He's always making them, it seems, in the fourth quarter when the game is on the line. You want that—clutch players."
"My other rusher from the linebacker position is Joey Bosa. Hey, if one Bosa on your All-Pro team is good, then two are better. Joey is Nick's older brother and plays down the coast from San Francisco in Los Angeles and he's someone you can count on to get after passer and to cause problems for opposing tackles. Whether he's a linebacker in the Charger's 5-1 base or a defensive end in their nickel, he's a great one."
Cornerbacks
"Jalen Ramsey is one of my guys, he can play inside, outside, he can play a "Star" or even as a linebacker. He can cover, blitz. he does it all. Welcome to All-Madden, Jalen."
"Trevon Diggs reminds me of Lester Hayes. He gives up yards, but he also turns games around. Lester did that. After I left the Raiders and saw my friend Tom Flores coach the Raider to a Super Bowl win,  Lester would give up some yards but when you play man coverage that happens, but turnover are at a premium in today's NFL, even more than ever before and this guy (Diggs) is the best at it. Hey, as a coach I will give up some yards if you can get me that ball. Diggs is an easy choice."
"In today's game, you have to more than two corners and I want one who changes games. Rasul Douglas is that guy. He picks off the ball and takes them for scores. And he's dropped a couple more. He's been a big part of the Packers defense. He's 6-2, 210, but plays and has the quickness of a guy who is 5-11, 185."
Safeties
"Tyrann Devine Mathieu is a perfect name. 'Devine'—you have to have a slice of Heaven. Honey Badger is his nickname and I always wanted that kind of guy. Honey Badger plays safety but also in the slot. he does it all. He is a perfect All-Madden safety."
"My other safety is Budda Baker, another great name, but he's also a great player. He has great speed but he can play coverage, blitz and in today's game they cannot hit like they did when I was coaching but when he gets a chance Budda will give a good hit. Also, you need a guy for 'luck' and according to tradition when you rub Budda's belly you get good luck, so we'll do that with Budda Baker."
Kicker
Pat Summerall is my kicker. If I have to pick someone alive it's Justin Tucker. You gotta have some class and sophistication on your team, so it's Justin. He can kick a 66-yard field goal and sing opera. SO, for me, he's a twofer. He can kick a game-winning field goal and sing an Aria. I think that is what they sing. I don't know but whatever it is, he can sing it."
"That's it. That;'s my team. We've got big uglies and good-looking guys. We've got tough guys and fast guys. I will take these guys to battle anytime."
Posted by John Turney at 12:36 PM