by Jeffrey J. Miller
It was with a combination of excitement and trepidation that Bills fans learned their team would be meeting the hated New England Patriots in the Wild Card round of the 2021 NFL playoffs this coming Saturday (January 15, 2021).  The excitement was due to this being the Bills’ second straight East Division title, thus securing home field advantage in the first round.  Additionally, the Bills had beaten the Patriots in three of the last four meetings, so prospects for a win leaned in their favor.  The trepidation is due to the fact that the Patriots and their head coach, Bill Belichick, pretty much owned the Bills for the two decades prior to the last four meetings between the clubs.  Then there is the fact that the Pats have been experiencing a bit of a revival this year after missing the playoffs in 2020, the first time since 2008.  Oh, and the fact that, well, it’s Belichick.  'Nuff said? 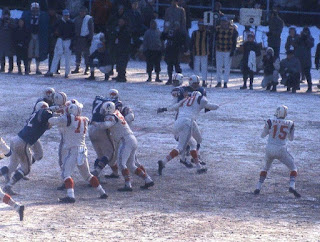 Boston quarterback Babe Parilli looking for an open
man.  He found plenty on this day.
This bitter rivalry goes back to 1960 and the very first game ever played in the American Football League.  For the league’s inaugural game, the then-Boston Patriots came to Buffalo on July 30, 1960, for an exhibition encounter at old War memorial Stadium (Boston won, 28-7).  Amazingly, in all the years since, the Bills and Pats have faced each other in the post season a grand total of one time.  That meeting (December 28, 1963) occurred in a divisional playoff after the teams finished the regular season with identical 7-6-1 records.  Unfortunately for Bills loyalists, the Pats prevailed 26-8 in a biting 24-degree day on a snow-covered field. Boston quarterback Babe Parilli threw for 300 yards and two touchdowns, while Larry Garron caught four passes for 120 yards (and both of Parilli’s TD tosses).  Gino Cappelletti caught four passes for 109 yards, while kicking two extra points and four field goals.  (Sadly, there is precious little film of this game, only a two minute and ten second snippet at the end of the Bills' 1963 highlight reel.  The Patriots did not produce a highlight film that year.) 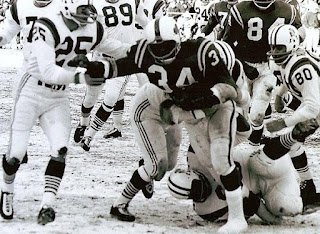 The Patriots went on to face the San Diego Chargers, winners of the AFL West, in the league championship game.  Bills fans took solace when they saw the Pats get steamrolled 51-10 by the high-flying boys in powder blue.
Fifty-nine years later, the Bills and their bitter rivals will finally meet again in the post-season.  This time, instead of Jack Kemp, Cookie Gilchrist and Elbert Dubenion, the Bills will be led by Josh Allen, Devin Singletary and Stefon Diggs.  The Patriots of Parilli, Garron and Cappelletti are now being led by Mac Jones, Damien Harris and Jonnu Smith. 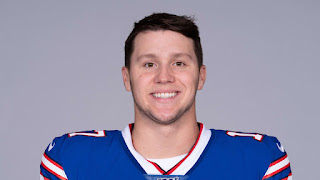 Bills quarterback Josh Allen
So here we are.  Plenty of water under the bridge over the past six decades.  The current Bills possess the #1 defense in the league, along with the #5 offense.  New England boasts the fourth-best defense and the #15 offense.  The Pats have surprised observers with an outstanding season considering where they were last year (7-9) and having a rookie quarterback under center.  They beat the Bills in Orchard Park in December in a blinding windstorm, and the weather forecast for this week’s game is calling for more inclement weather.  Weatherfolks are forecasting as game time temperature of just 8 degrees!  But this is Bills country, and as Darryl Talley famously said, “When it’s too cold for them, it’s just right for us!”   The Bills are 4 ½ point favorites and should be able to beat that handily.  Their playoff experience (this will be their fourth post-season appearance in the last five seasons), smothering defense and fire power on offense will tip the scales in their favor.
Posted by Jeffrey J. Miller at 1:59 PM