Rams Teams Who Played Three Games in the Playoffs—Is This The Best Defense?

The Rams beat the 49ers 20-17 last night because they were a wild card team it was the third playoff game they have been in in the 2021-22 season.
Since the merger, only six Rams teams have done that. Of course, that means little in that a lot of Rams teams played in NFCCG weekend like the 2021 iteration but they didn't win and get to the Super Bowl like the 1979, 1999, 2001, and 2018 teams. The 1989 Rams didn't make the Super Bowl but won a Wild-card game and a Divisional round game.
The point we are making is how good this Rams defense has been in the playoffs. It has been oft-criticized with many Rams fans calling for his firing during the season. His defense was not the best in the NFL like in 2020 but it was solid in most aspects, stopping the run, getting picks, saving the quarterback, hurrying him, knocking him down. It has proven it was always good enough to get to the Super Bowl.
So we've looked at the past three-game playoff game Rams squads and this is what the numbers show:
Here are the charts—
Here are the more traditional figures—

The 2021 Raheem Morris-led defense is tops against the run by a wide margin—54.0 yards a game and a 3.1 YPC. They also led in the fewest total yards allowed. This makes the case that they are at the top of this selected group. They are also third in sacks and third in picks, had the lowest third-down conversion marks of this group, and have a defensive passer rating of 67.0—excellent for this era.
The 2001 Lovie Smith defense allowed the fewest rushing TDs, fewest passing yards, picked off the most passes (thank you Brett Favre)—and created the most turnovers with ten.
The co-led 1999 defense had the most sacks and sack yardage. The run game coordinator was John Bunting and the play-caller was Peter Giunta.
Fritz Shurmur was the DC in 1989 and his unit tied for the fewest points allowed with 50; They tied with the 1979 Rams in allowing 16.7 PPG. They also allowed only two TD passes,
Carson's 1979 Ram defense holds the passing marks including the lowest defensive passer rating fewest attempts and completions. His group also stopped his opponents on fourth down on all four tries (0.0%).
Wade Phillips was the defensive coordinator for the 2018 Rams and though they didn't lead in anything they still played good run defense—the best until last night.
Of this group, only the Giunta/Bunting bunch won it all with Sam 'backer Mike Jones making "The Tackle". Morris' defense has a chance to do the same and if they play like they have in the last three games they should win a Super Bowl on their own home turf. 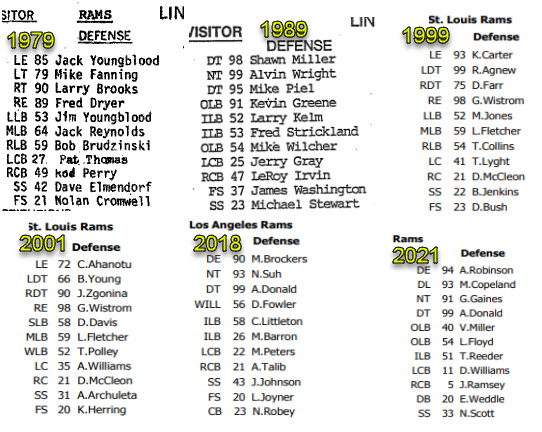 Above are the starting defenses in the playoffs, for the most part. In the 2018 NFCCG Rams opened in nickel. Last night they opened in a 4-3 Pro (6-1) which they use versus teams that run the ball well. They also used their base 3-4 defense, which they don't use much, preferring their 5-1 (33 nickel) front.
The 1979 Rams were a 4-3 team. It was the Ray Mayavasi defense but Bud Carson, who joined the Rams in 1978 played much more Cover-2 than Malavasi did because he had Nolan Cromwell, who had the range to play it. In the 1979 playoffs, Carson employed the Rams Dollar defense which was seven defensive backs on the field but it was really just a nickel defense with two defensive backs playing linebacker—Ivory Sully and Dwayne O'Steen.
The Dollar was used to face the Cowboys thrid-down spread offense which the Cowboys they were so successful in using. Carson thought that a safety or corner, playing linebacker, would cover Preston Pearson better than linebackers Jim Youngblood and Bob Brudzinski. Also, it should also be noted that this was the game Jack Youngblood sustained an oblique fracture in his left leg and it limited his effectiveness in the 2½ games he played with the broken leg.
In 1989 they were a 3-4 base but used a lot of nickel and dime personnel, which flustered Randall Cunningham. They also had two versions of their "Five linebacker" packages.
One was the Eagle which could be converted to their "Hawk" by simply stemming their nosebacker (Fred Strickland) to an inside linebacker position. That converted a 6-2 (safety was usually in the box) to a 5-3, or rather a 6-1 to a 5-2 in your a purist. But the personnel was five linebackers.
Additionally, they had a five-linebacker dime defense with four linebackers as defensive linemen and Mike Wilcher, the usually right outside linebacker playing the Mike 'backer.
Bud Carson's defense was the one being used in 1999 by Giunta. It was a 4-3 with multiple fronts, even, overs and unders, a Bear front (46), and so on. On passing downs Charlie Clemens often came in as what is now often called a "Joker" or he'd play LDE and Kevin carter would sink to left defensive tackle and Ray Agnew would go out of the game. The nickel back as Dre Bly and Taje Allen was the dime.
The defense played poorly in 2000 so Lovie Smith and his Tampa-2 scheme was imported after leaving Tony Dungy's staff in Tampa. In addition to the starters above, Leonard Little would replace Ahanotu in the nickel. Again, Dre Bly was the fifth DB.
The 2018 rams with Wade Phillips used a 3-4 one-gap scheme, often the undershift called Will Wink. It performed well in the playoffs but struggle in the regular season against the run. Ndamukong Suh was out-of-position at the nose tackle spot and had a so-so season but he was ignited in the two playoff games before returning to his regular-season form in the Super Bowl
Morris runs the Brandon Staley defense for the most part. The 5-1 and the 40 nickel with All-Pro Jalen Ramsey as the nickel or "Star" as they call it. It's a gap-and-a-half scheme with the nose and Aaron Donald and A'Shawn Robinson playing their gaps but squeezing the one next to them but pushing and learning enough to get the linemen cooking them to move into or at least partially block the pathway of a runner trying to hit the A-Gaps.
Match-quarters are the basic coverages for the Rams but they often rotate to a Cover-3 robber and some Cover-2 in the red zone is used as well.
We've covered the basics of the schemes with some highlights. More could be posted but we hope the broad strokes will give readers some food for thought.
Your comments welcome below—
Posted by John Turney at 3:32 AM