By John Turney
With both conference's title games later today it is an exciting time for NFL fans and fans of the four teams involved—the Kansas City Chiefs, the Cincinnati Bengals will battle in Arrowhead Stadium in Kansas City and the San Francisco 49ers and the Los Angeles Rams square off in SoFi

Chiefs Offense
Mahomes, we speculate, will be tremendous. Everything has already been written so anything we add is superfluous.  He didn't have his best year (we predicted that he would be the MVP) but it was a very good (not great) year. We think he will be on. He has the weapons, a bug TE, fast receivers, and a decent running game when his backs are healthy. 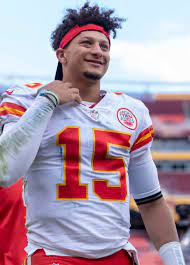 The Chiefs were 3rd in total offense and 5th in yards per play. Their passer rating, as a team was 98.1 and the opponents had a defensive passer rating (DPR) of 92.0. They allowed the third fewest sacks in terms of percentage in the NFL and had the 10th lowest interception percentage. Only the running game lags.
We think the Chiefs will move the ball and score their points (28.2, fourth in NFL) and we predict will get more than their season averages in yards and points. 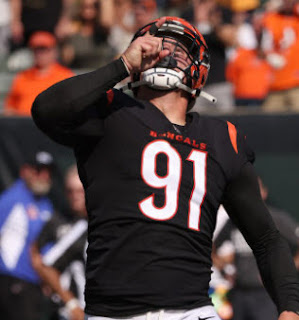 Bengals Defense
The Bengals have some talent on defense and some size in their front six. Sam Hubbard is, in our view, a player, and Trey Hendrickson (a free agent signee from the Saints) is a Pro Bowl-level defensive end.
Look for Trey Hendrickson to play his joker role on some third downs as both a spy on Patrick Mahomes and also to pick his gap and rush. This is in addition to his base role and a defensive end in the 4-3 and a stand-up linebacker in their 5-1 (which is spreading around the NFL).
DJ and BJ (Reader and Hill) are the defensive tackles. Hill spent most of the year as a third-down rusher and we picked him to our All-Role Player/Backup Team. Now, he's a starter because Larry Ogunjobi, a free agent pickup from the Browns, got hurt.
Hill is more than capable and at times, can dominate. The Bengals can stop the run—seven times they held opponents under 80 yards. But then in the season final two games, they gave up 360 yards to the Chiefs and the Browns and that cause their rush defense to drop from 92.2 yards a game to 102.5.
Which will it be versus the Chiefs? The good run defense or the bad one?
The linebackers are decent but are not Pro Bowl-types. The secondary and their numbers are almost all in the 20s—the bottom 1/3 of the NFL.
so we predict the Chiefs will score at least 35 points.
Bengals Offense
Joe Burrow is Joe Namath in a modern passing game. But with all the hoopla about him, his passing yardage (4611), and his passer rating (108.3) he still needs to be careful today. His run game is not great though Joe Mixon is good, very good, even. But they move the ball in rushing yards that ranks 23rd in NFL and their average yards per carry is just under average.
The Bengals don't need Mixon to gain 100 yards. The Bengals need for Burrow to not have to throw every down. And a run game that is efficient and does not turn the ball over will go a long way to keep the Bengals in the game.
Bengals Special teams
McPherson is an excellent kicker. Their punter is decent, not special. The return and coverage units are about average both ways. No advantage for them. The Chiefs have that in special teams.
Chiefs Defense
The Chiefs defense was not good early in the year they became very good, though the Bills Playoff Game didn't show it. But, overall they were in the bottom third in yards in most categories. So, we think the Bengals can make some hay. But if the Cheifs defense, under Steve Spagnuolo, can muster a game like the seven he called in the second half of the season when the Chiefs held opponents to around 300 yards in offense but there were some poor games in there as well
We predict the Bengals will score 27 points.
Chiefs Special teams
Townsend and Butker, the punter and kicker are both excellent. The Chiefs are at one on of the best on punt returns and at covering the, The same is also true of the kickoff units.
This is a big advantage for the Chiefs.
NFC
49ers Offense
49ers offense is special in terms of what they do. Garoppolo's hand, we are convinced it hurt more than he's saying. While that does not account for every poor throw he's made it has to be a big factor in some of the errant passes he's thrown recently.
The 2021 49ers remind us of the 1979 Rams. They both had seven losses and had a quarterback who could be very good and could be very poor—Vince Ferragamo.
Both had/have great running games but had injuries to backs during the season but replacements took over and played great.
Both had dominating front sevens. And both had injuries in the secondaries that skewed their defense stats somewhat.
However, the '79 Rams didn't have someone like Deebo Samuel. he's nothing like the NFL has seen since Lenny Moore from 1957-64. They both are excellent runners and gifted pass catchers. Deebo does more though in being part of the run blocking game (as is Cooper Kupp).
We like watching the run game of the 49ers that still uses a fullback and a tight end a lot of the time and when they are on their game precision passing, at least inside the numbers. Our eye test suggests that Garrapolo is less effective throwing outside the numbers. Inside he gets the ball off quickly, as quickly as any quarterback in the NFL and he fits it into tight windows.
So, smashmouth, play-action offense versus the Rams defense.
Rams Defense
In 2020 the Rams were, statistically the best in the NFL—fewest yards allowed, fewest points allod, a good pass rush, a low DPR. They did it all.
This year it is a good but not great defense. They still do some things well—they stop the run, they get to the passer, they pick off passes but during the regular season they had issues on thrid down. In the playoffs they seem to have rectified that.

But they are playing their nemesis and that changes things.
Aaron Donald still can make a claim that he's the best player in the NFL and Greg Gaines has come on as well. Donald in, obviously one of our All-Pros and Gaines was part of our mock All-Madden team and made our Almost All-Joe, and our All-Role Player/Backup Team team as well.
It looks like linebacker Troy Reeder will have to share time with Ernest Jones who has been on IR. he's designated to comeback and will likely get quite a few reps. He's a rookie and with that came some mistakes but he is athletic and smart and was improving until he got hurt.
The Rams are banged up at safety but Nick Scott is playing well in place of Jordan Fuller, knocking balls loose, picking off a pass in the playoffs. Terrell Burgess is playing in place of Taylor Rapp who is still in concussion protocol at least on run downs. Eric Weddle plays on passing downs in a platoon situation you don't see that often in an NFL secondary.
Von Miller is coming on and looking like his former self. Leonard Floyd is solid. Justin Hollins has been spelling the outside linebackers and in one package he plays a joker as an inside linebacker who can drop but really is there to rush—picking a hole and dogging, much like the position we mentioned Trey Hendrickson will play.
So, we still thing the 49ers will be bullies and grind out 25 points.
Rams Offense
It is mostly on Matthew Stafford. If he played well they will win. If he throws up a stinker, Rams lose. it is as simple as that.
In five years as Rams head coach Sean McVay has run the ball 4o% of the time, year-in, year out. Against the Cardinals in the Wild Card round the Rams ran the ball 67% of the time as he channeled Chuck Noll and Don Shula. Stafford threw just 17 passes but still threw for 200 yards.
The next week it was different because they got a big lead (27-3) and then proceeded to lose it (to a 27-27 tie) and then on the final drive Stafford did what he was hired to do, go deep.
The Rams quick-snapped the ball, one of the Bucs linebackers didn't get the blitz call and Kupp ran a decoy rout that became the target. He whipped Antion Winfield, Jr. on perhaps what could be called a skinny post and flashed for Stafford to see and he threw a dime to Kupp and the rams pulled the game out—one that could have been a high embarrassment. They made chicken soup out of chicken shit.
Cooper Kupp is the Rams offense. We thought he should be the MVP, not just the Offensive Player of the Year. he was always open, rarely dropped a ball, blocked in the running game.
still, after that sidebar, in the playoffs, the Rams have run the ball 53% of the time, a far cry from what we're used to seeing from the Rams.
We predict the Rams will score 29 points.
Rams Special teams
Matt Gay and Johnny Hekker are both excellent. Branden Powell coming in from the PS has been a godsend. before him, it was such a mess that Cooper Kupps had to field punts just to prevent disasters. In the middle of the season, the Rams fell for a couple of fake punts and couldn't field an onside kick.
Most of that was straightened out, however. We will see if poor special teams play rears its ugly head. The 49ers may try a fake, or the Rams might. No punter is better at it than Hekker.
With the Super Bowl on the line both teams will be pulling out all the stops and that includes gadget plays and special team gadget plays.
49er Defense
The 49ers defensive line is so fun to watch. Nick Bosa, the best 40 end in the NFL is relentless. Arik Armstead is really coming on closing the season with 9 sacks in the last 10 games, including the playoffs. Arden Key is a fine nickel rusher who comes in in likely passing downs.
Fred Warner had an off-year but in the last month has been playing at his former All-Pro level. His sump is over. Dre Greenlaw needs to keep a cooler head, last game he cost the 49ers 30 yards n preventable penalties and had one more that could have been called. If he makes those kinds of mistakes again it's unforgivable.
The 49ers are in the top seven in the rankings in the traditional statistics and have the third-best pass rush in the NFL according to sack percentage.
But, like the weakness of the Bengals, the 49ers have had problems at cornerback. AT times it was ugly. The safeties are decent but again, this year anyway, they are not close to a Pro Bowl level.
Special teams
Wishnowsky is fine, Gould is excellent. Their punt returns net little either way. But Holy Cow!. The 49ers gave up over 1,200 yards in kickoff return yardage and a touchdown. This is a legitimate weakness you know the Rams will try to exploit.