Today PFJ is looking back at the Oorang Indians. This year, 2022, is the 100th Anniversary of this special pro football team that played in the NFL for two years starting in 1922. Throughout this year PFJ will write about this unique football team that was organized by a dog kennel owner, Walter Lingo, in his hometown of LaRue, Ohio, and was coached by the great Jim Thorpe.

These two men put together a NFL team that consisted of all Native Americans and traveled the country playing football games- as well as advertise the Oorang dog.

On this day, January 5, 1922, the first-ever mention of the Oorang Indians football team being formed was written in the Marion Star. 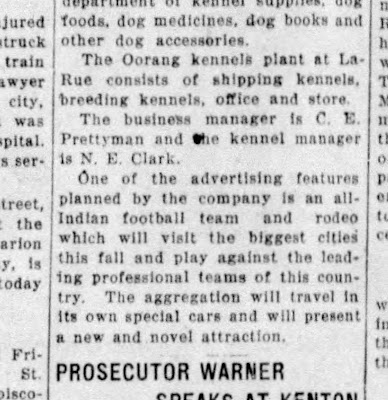 A few weeks before the announcement was made in the Marion Star, Walter Lingo had to convince his good friend Jim Thorpe to join him in the unique promotional idea. In December Thorpe had just finished the NFL season playing with the Cleveland Indians. On December 11th the Indians lost on the road, 7-0, to the Washington Senators in front of a large crowd of 5,000 spectators. Thorpe, although he was past his prime at the age of 33, was still the sport’s biggest gate attraction. On that day Thorpe showed his age, missing a 46-yard drop kick, as the Senators scored a touchdown late to win. Also on that team were Pete Calac and Joe Guyon, former teammates of Thorpe at Carlisle.
Shortly after returning to Ohio Thorpe was contacted by Lingo to see if he wanted to go hunting. He told Thorpe to come to La Rue and he’ll take him on a hunting trip that he’ll remember for a long time. Thorpe agreed, telling Lingo he was bringing Calac with him. It had been a long season, after leaving the Canton Bulldogs and playing for a different team, Thorpe needed some relaxation and a hunting trip with his good friend was just the right medicine.
Cleveland had finished the 1921 season with a 3-5 record, losing five of their last six league games, so Lingo was excited about getting Thorpe to his hometown to cheer him up and present to him his next big promotional idea.
Thorpe’s trip to La Rue made headlines in one newspaper. On December 22, 1921 the Altoona (PA) Tribune wrote:
“Jim Thorpe Indian pilot of the Cleveland football team, and two other Indian athletes, Joe Guyon and Pete Calac, have gone to La Rue, west of Marion, O., for a hunting trip with Walter H. Lingo and his pack of coon hounds.” 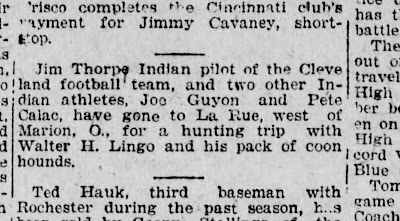 Later on, research shows that only Calac joined Thorpe on the hunting trip to La Rue.
HUNTING TRIP IN LA RUE AND “THE IDEA”
When Thorpe arrived in La Rue little did he know that was going to be a part of a hunting trip that would make NFL history. While hunting among the swamplands of Marion County Lingo brought up his newest promotional idea to Thorpe. He wanted to form a professional football team in the fairly new pro league with him as player-coach. The team would travel to all the other cities in the league, play games, and more importantly, help advertise his Airedales.
The team would also be made up of entirely Native Americans- like Calac and Joe Guyon. Lingo went on to tell Thorpe that he would pay him $500 a week to be player-coach, if he wanted to play, and be a supervisor at the kennels. He told Thorpe that he would pay transportation costs, players’ salaries (because they too would help work at the kennels), and set them up with a place to live in La Rue. “I think we paid them 10 or 15 dollars a week, plus room and board,” said Bob Lingo, son of Walter Lingo. “In those days people were working for a dollar a day.”
Lingo had outdone himself. Although he wasn’t a big football fan, he had combined two of his biggest passions- dogs and Native Americans. This was his next big idea to help sell more Airedales and continue to get his dog kennel out to the buying public. He wanted Thorpe’s help to accomplish this. He also truly believed in giving Native Americans a role with his kennels. Lingo had this belief that the Indians had a sense about them with animals, especially with dogs. “My father thought the Indians were very intuitive. That they could spot certain characteristics in dogs,” said Bob Lingo. “It’s just a natural instinct with animals. I’ve been around animals all my life and never been bitten. I’ve been with animals that nobody could get close to. My dad was that way. He was never bitten. The Indians were that way. I don’t know what it is. I think animals can sense your feelings towards them.”
By the end of the hunting trip Thorpe had agreed to do it. He would be player-coach and work as a kennel supervisor. Calac also agreed to be a part of the team. “He (Thorpe) was the first person that dad talked seriously to and he thought it was a good idea to enhance the Indian image as not being a bunch of wild drunks,” said Bob Lingo. Walter Lingo had done it. His latest promotional idea was now rolling. Like the rest of his ideas involving his dogs, he tackled it full speed ahead.
Happy 100th Anniversary Oorang Indians!
More articles, stories and photos/images coming in 2022.
Posted by cdw83 at 12:15 PM